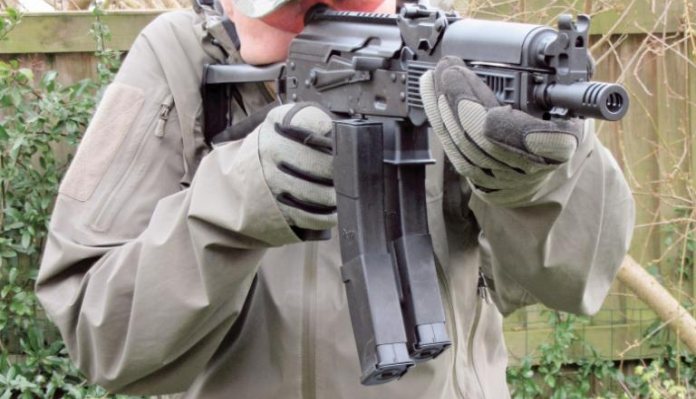 The ‘AK’ market seems to be going through a bit of a renaissance right now, with more suppliers, custom builders, and accessory manufacturers than ever before, and I have to say that this pleases me no end, as the venerable Kalashnikov deserves its place in the limelight, just like any other rifle or carbine. I was intrigued to see at SHOT Show earlier this year that even the likes of Leapers/UTG have finally jumped on the bandwagon, with some absolutely cracking looking rails and accessories for the AK.

What I also find slightly surreal is that the people at the forefront of the ‘AK Revolution’ are based in the USA! Surely it must be some form of sacrilege for custom AK’s to be made in the ‘Land of the Brave’ but the likes of Krebs Custom and Rifle Dynamics are truly producing some works of art using the Russian platform, although it must be noted that the base rifles can originate from many different parts of the old Soviet Bloc. Add to this that companies like Zenit are now shipping their up to the minute accessories worldwide and you have a real recipe for success!

The Kalashnikov AK-12 (formerly AK-200) is the newest derivative of the Soviet/Russian AK-pattern series of assault rifles and was proposed for possible general issue to the Russian Army. In late September 2013, the AK-12 was passed over by the Russian military, but it was announced in December 2014 that it had passed state tests and now the AK-12 rifles chambered in 5.45mm and 7.62mm are being evaluated by the Russian Army; as of this moment, the AK-12 is in trials with select units.

The predecessor to the AK-12 was the AK-74, and one thing that came to light during the early design glimmerings of the ‘12’, was that there would be no shorter carbine variant to replace the AKS-74U; the AKS-74U (‘U for Ukorochenniy, or Shortened) was initially issued to a few very specific units, but by 1979 it was far more widespread, being fielded by Special Forces, airborne infantry, rear-echelon support units and vehicle and helicopter crews. As time went by, more and more of these carbines ended up in the hands of special units of both the military and police, and the question of course was, ‘what would be the replacement?’

Chambered for the standard Russian 9x18mm Makarov pistol cartridge, and able to also fire the new high-impulse armour-piercing 57-N-181SM round, the PP-19 ‘Bizon’ was developed at the request of the Ministry of Internal Affairs (MVD) in the early 1990s and was primarily intended for counter-terrorist and law enforcement units that usually need fast and accurate fire at close ranges; the helical magazine under the front end that was designed to keep it ultra-compact was a departure from the traditional box, and encountered some feed issues. Prototypes were trialled by the Special Equipment Research Institute in 1995 where they outperformed several competitors, and the weapon was accepted into service on December 28, 1996. Although a good performer, there were defects in the ‘Bizon’ that eventually led to it being replaced.

The Vityaz-SN is a 9x19mm Parabellum submachine gun, developed in 2004 by Izhmash. It is based on the AKS-74U carbine and offers a high degree of parts commonality with it. The PP-19-01 has evolved from the relatively unsuccessful PP-19 ‘Bizon’ submachine gun, after requests from the elite Russian law enforcement team ‘Vityaz’ (‘Knight’ in Russian) for highly compact firearm that could be used in the close quarter environments found in cities.

The PP-19-01 shares about 70% of the parts found in the AKS-74U, utilising standard AK-type trigger and safety / fire selector controls. A special magazine housing is attached below the receiver, which accepts proprietary double-stack magazines, made from polymer. Two magazines can be clipped together using a special steel coupler for faster reloading. The PP-19-01 retains the ‘tried and tested’ AKS-74U-style side-folding skeletonised butt and the tangent style adjustable rear sight found on many AK variants.

With a simple blowback action, it uses more conventional magazines and fires the more powerful 9x19 ammunition, which is now standard in Russia. As of mid-2007, the PP-19-01 was in limited production in Izhevsk and is already in use by some specialised ‘OMON’ teams of the Russian police and other law enforcement agencies. The PP-19-01 can fire most commercially available 9x19 Luger/Parabellum or 9mm NATO ammunition, as well as Russian issue 7N21 armour piercing ammunition. The roll-out of the ‘Vityaz’ will correspond broadly to that of the AK-12.

Whilst many airsofters, myself included, enjoy a good classic AK replica, there are actually many players out there that are doing some fine living history standard loadouts based around modern Russian forces, and LCT are not only producing replicas for the OPFOR enthusiast, but also for those who truly take on the MilSim-immersion side of things and want everything ‘just so’. LCT offer products that are not only unique and cost effective, but also reliable in performance and solid in build quality. Their take on the ‘Vityaz’ features a very high-quality external build, utilising 9mm bearings, a 22000rpm motor, a brass, chrome-plated cylinder, and both the cylinder and piston heads are CNC Aluminium Alloy. The wiring throughout is, as usual for LCT, high quality 18AWG, which will give good, reliable long-term performance.

As with other LCT ‘AKs’, the features are excellent, as it comes with a full steel receiver and barrel assembly, and an extremely solid side-folding stock. The polymer furniture and modernised pistol grip are very well achieved, and the detail is perfect, even down to the new-style flash-hider. Like the AKS-74U the PP-19-01 has a retained top cover, hinging just behind the classic AK-style rear sight. The twin 50 BB magazines come with the correct style of coupler, although they can be removed from this for easier pouch storage; additional 50 BB twin-pack magazines are available for £24.99.

Having now had quite a lot of experience with LCT’s AEGs, I had high expectations for the PP-19-01; once again LCT recommend a 11.1v Li-Po as the power source for the AEG, and as usual, it’s a tight fit given that the battery sits under the top cover. As I’d worked out the battery fit already on my own AKMS, it was time to get the beast to chrono, and the test sample came in at a UK site (and now legal) friendly mean of 1.01-Joule/330fps using .20g BBs; all LCT replicas are in fact downgraded by the factory in Changhua to UK legal specification and tested before they are shipped.

Setting up my targets at 10- and 30-metres and after correctly setting the hop at 10m CQB range on semi-auto it was time to get some plates falling, and the ‘Vityaz’ was no disappointment; even though the inner barrel is relatively short at 255mm, and struggled a little with accuracy at the further extent, the replica proved precise enough to hit a ‘Fig 11’ at that distance, which in airsoft is, of course, what we’re after!

My sincere thanks go Fire Support, who kindly supplied the test rifle. They currently have the PP-19-01 available for sale at £259.00, and an abundance of spare magazines in stock. If you fancy the idea of an AK variant, but want something that’s a little unique, different and thoroughly up to date, then the ‘Vityaz’ could be just the thing you’ve been searching for.