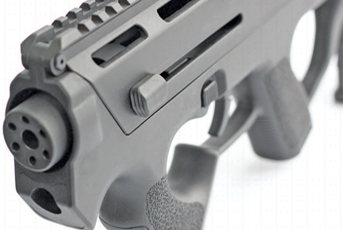 Finally after a VERY long wait it’s finally here! The new Personal Defence Riﬂe from Magpul PTS which houses some fairly extreme engineering in its streamlined and compact design.

This is a fully functioning AEG which has confused some forum speculators who were convinced that due to its rather unique layout that it may be powered by gas, but no inside the grip lies a connector for a Lipo battery which provides a pretty nifty trigger response time.

Up Close and Personal

Before I get into specifics here’s some general background for you. This was a gun that never went into production and really only ever existed on a drawing board due to concerns over cost, however the idea behind it seems pretty solid to me. This is a compact weapon designed exclusively for use by vehicle crews and covert teams who needed something small and streamlined with nothing to catch or prevent fast deployment.

The PDR is made of polymer and has both a grip and a built in curved foregrip giving you somewhere solid to place your hands and the stock is fixed and non-adjustable. There is a RIS rail running along half of the upper surface so sights or optics would not be a problem but with a gun this small any kind of scope set up would leave you feeling a bit like you needed shorter arms! The hop is located underneath the detachable cheek piece and is easily adjustable even for a dunce like me. The battery as I mentioned earlier plugs into a connector housed inside the grip where it is held in place by a rather stiff plug – I almost broke a nail and had to resort to my trusty Multi-Tool to get it out.

So How Does It Shoot?

I took the test gun over to a CQB game where it should be in its element to find out….

Well first things first, out of the box the PDR was firing at 340 FPS with a .2g BB which while fine for my local site would be a bit hot for most, but luckily the spring is easily accessible so swapping it over and bringing down the FPS would not be a problem. The PDR came with a 20 round P-Mag which holds approximately 70 BB’s so I had to make every shot count in a game where unfortunately for me full auto and Hi Caps were allowed.

Of course I took a fair bit of punishment but I was pleasantly surprised by the PDR’s performance. There is a dual stage trigger which took a while for me to get the hang of as one short pull on it gave me a single shot but pulling further switched me into full auto which with only one 70 round mag I really did not want to do!

I found however that once I had got used to it the response was good and the BB’s were going exactly where I wanted them.  The one major issue that I had with this was the location of the mag release which is above the foregrip. I think that had I taken more magazines with me then I would have got used to it but having run with M4 variants for so long I had quite a bit of trouble with it but that is probably a personal issue rather than a problem with the design.

All in all the Magpul PTS PDR - C is a nice, clean, streamlined piece of kit which does exactly what it was intended to do and if you’re a big fan of CQB then this is the ideal AEG for you and I do expect to see plenty of these in the next few months especially as at present they are retailing all across the country at a pretty reasonable £325 – visit www.edgarbrothers.com   for lists of stockists