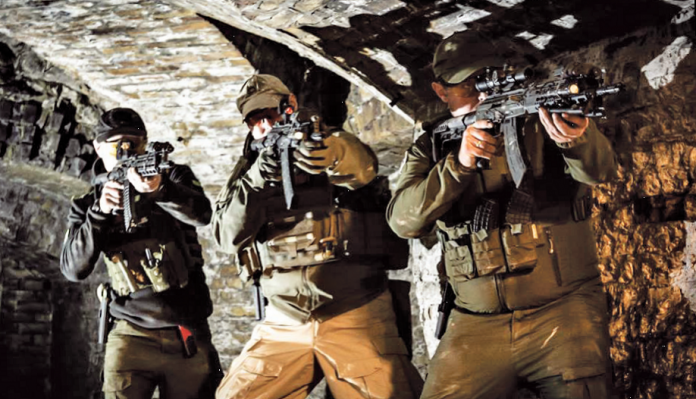 I’ve been lucky enough to have been involved in the airsoft world for a while (in fact, next year marks my ‘silver anniversary’!) and therefore my relationship with certain manufacturers goes back a long way, and one of the manufacturers I work very closely with, is NUPROL. I’ve seen them grow from a single office and small warehouse in Surrey, to the ‘major player’ that they’ve become, thanks to sheer hard bloody work and diligence.

Over the years, I’ve seen many prototype RIFs go from concept to full production, but never before though have I been involved with an airsoft project from absolute ‘let’s sketch the AK we’d all like’ inception to open-market release, and even to me it’s been one hell of a ride!

You may well ask how this has any relation to the new ROMEO AK series of AEGs? When I first looked at their then ‘new’ series of DELTA AEG prototypes, back in 2015, I asked Ross at NUPROL if there would be a ‘proper AK’ and, even back then, he told me that this was something he would love to do. As the DELTA range grew successfully, I kept on asking him about that ‘proper AK’ and it was always a project that was on the back burner, but very much still on the cards and, along with in-house tech guru Mark, we discussed details of what should be included in the build project endlessly.

Fast forward to November 2018 and, after a tremendous amount of hard work, much travel to the Far East on Ross’ part, wide-ranging commitment from the NUPROL team, along with a little input from yours truly, ‘Project AK Series’ finally came of age, and the ‘ROMEOs’ were born! Ross sent me a picture of the very first ROMEOs to be unpacked from the container at the NUPROL warehouse and I sat back in my office chair and breathed a sigh of relief, as the finished production models looked to be absolutely stunning!

Putting the cool into ‘tacticool’

When it comes to the ROMEOs, NUPROL unashamedly put the word ‘tacticool’ alongside them, and this is what they are, with an emphasis on the ‘cool’. What Ross and I discussed initially is what they have actually made; it is not a ‘classic AK’, as many manufacturers actually make very good ones already, nor is it an ‘FSB-inspired’ model. It’s actually not a ‘military’ AK at all, but has the look of something that you might see being created by Marc Krebs in the USA; the sort of thing that we discuss on ‘AK47 Chatterbox’ or what you might see being torture-tested on ‘AK Operators Union’!

If you look around the real firearms industry nowadays, everyone and their dog has ‘tacticool’ bolt-ons for the AK platform; Magpul, check. VLTOR, check. Daniel Defense, check. Knights Armament, check again! In fact, virtually every firearm accessory manufacturer worth their salt has recognised that those old ‘import AKs’ are getting a whole new lease of life; but that’s just good business!

What NUPROL have cleverly done is to look to these ‘thoroughly modern AKs’ for inspiration and then put their own unique slant on it; wow, have they ever! In a nutshell, what you get with the ROMEO models is a mid (AK105 - BRAVO) length and a full (AK74 - ALPHA) length with either a KeyMod (RECON) or N-Lock (NOMAD) rail system.

Internally, the ROMEOs feature an all new ‘V3’ gearbox, and come fitted with high-quality silver wiring as standard. They also come with a 6.03 tightbore QPQ (Quench-Polish-Quench) finish inner barrel, and a quick-change spring, along with a full steel-toothed piston and gears; in fact, everything inside looks neat, tidy and workmanlike.

Externally, the magic continues, as the body is made of pressed steel (the ROMEOs comes ‘oiled’ for a reason!) and they’re made by a manufacturer of real AKs and ‘Type 56s’ in China. Although the bodies are made by a ‘real-steel’ manufacturer, I would stress that they are produced specifically for airsoft, and have been checked by the authorities to ensure legality.

The rail systems are all CNC machined aircraft grade alloy, and are a proprietary design for NUPROL. The finish is absolutely superlative, and each rifle comes with three of the appropriate rail sections. The flash hider is also a corker, unique in its design, and Ross tells me that he may have seen something in the Chinese factories that gave inspiration for this. The pistol grip is ‘standard AK’, which is great for players with smaller hands but easily changed if you wish, and the ROMEOs all come with NUPROL’s own AXE stock, which gives them a very distinct overall look.

Controls are also ‘classic AK’, although the selector lever is of the overtly ‘tacticool’ style, making switching between firing modes far easier. I will say that the fit of the top-cover absolutely amazed me! In all the AKs I personally own, this can be a bit of a ‘failure point’, as generally speaking they are often a tad wobbly; not so the ROMEO, as you’ll actually struggle to get the top-cover on an off, the tolerances are that tight! Again, I asked Ross about this and he told me:

“When it comes to the finish of our AEG’s, this is always the top priority for us, as we feel this is the first thing people will see; there is nothing worse than picking up a replica and it creaks and moves.

An AK has to feel like it’s been made in the industrial smog of a USSR city in the 80s and moving into the modern AK era they manage to keep this feeling while also having a PMC/tacticool feel and that’s what we wanted to replicate. So, when it came to production, we had to make sure we made the bodies authentically using Steel and machine cut Aluminium Rails.

Also, when it comes to putting the rail on to the top cover of the AK we had to ensure that if you are going to fit a nice optic to the replica that it is indeed going to stay where you put it and not drop off the rifle and make you hate your new Nuprol AEG!”

In action, the ROMEOs are absolute beasts from the east, chronoing at 1.02-Joule/332fps (on my Xcortech, although NUPROL chrono using a SKAN to ensure UK legality and quote 331-336fps) consistently using NUPROL’s own RZR .20g BBs. Moving it up to slightly heavier .25g RZRs, the range was extremely consistent too, sending the BBs right to the extent of the 30m range with a dead-flat trajectory; after running a couple of full mags through the AEGs, on semi I was able to achieve a 50mm grouping at that distance, and switching up to full-auto delivered a stream of BBs straight to target. The ROMEO series all come with a totally unique polymer HiCap mag of NUPROLs own design, which feeds happily and unerringly; I also tried magazines I own already, Hi and MidCap, from the likes of E&L, LCT, CYMA, MAG, and STAR and everything worked just splendidly throughout testing (other than one particular CYMA HiCap that has only ever fitted in the AEG it came with!). Ross told me that new MidCap ‘NK-Mags’ of the same design would be arriving shortly.

I’ve come away from my first proper look at the NUPROL ROMEO series feeling massively impressed, and I can’t help also feeling insanely proud of what my friends, a great British company, have achieved here. I’m also proud to have been involved with this project to the degree I have been.

Are the ROMEOs what I hoped to see from NUPROL? Yes, they are, and more! If I still lived in the USA, this is pretty much exactly what I would build for myself in 7.62x39mm, right down to the neat little sling plate under the buffer tube! The models feature superb, high-strength and high-quality parts that have been used to the very best effect, and the net result, in my mind, is a stunning, up-tothe- minute AK. I believe that the ROMEO series will be another enormous success for NUPROL, and bring the ‘modern airsoft AK’” fully into the limelight at last!

For more information on the entire ROMEO series of AEGs please do visit nuprol.com