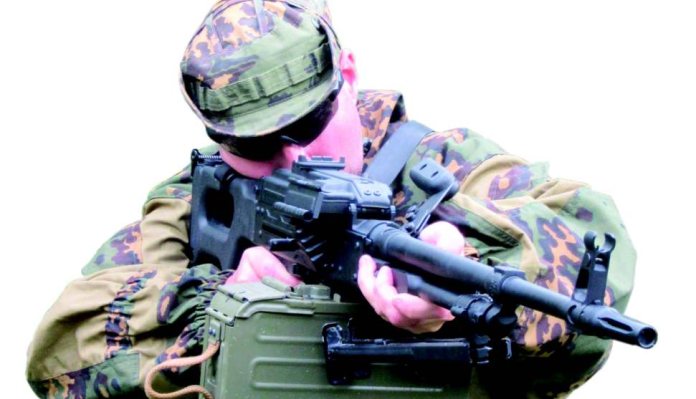 I do love my OPFOR airsoft as it’s one way of playing at the highest level of MilSim whilst retaining the very best of the skirmish roots of the game. More often than not you’re going to be outnumbered and largely outgunned by the heroes of BLUEFOR, but when you get to throw in an ambush or dig in around your final bastion, then there’s no better tool than a big-ass GPMG! Although there are numerous well-priced RPK models available from reputable manufacturers aplenty, and of course the stunning but oh, so expensive LCT RPD, when it comes to good soviet GPMGs the choice is a little more limited!

I often see the question raised in online groups as why anyone actually wants an airsoft GPMG as they are usually big and very heavy compared to even an LMG, and offer no real additional benefit over their lighter-weight brethren when it comes to range and even magazine capacity; an RPK fitted with the correct long 800BB HiCap and with a 2500/3000 BB drum mag tucked away for perimeter defence offers the same range and firepower on the field as a GPMG, and is actually far more handy!

That said though, there’s just something about rolling out the big guns at the right game that sets my excitement level to maximum, especially when the GPMG is set up in ambush, or to protect an overnight position or a compound; they just look and feel right, and if you’re going for full BattleSim or MilSim immersion then there’s nothing better than being behind the big boy when BLUEFOR come a-calling, and nothing more satisfying for BLUEFOR then taking out or capturing the support gun that’s been giving them grief!

Now the A&K Airsoft PKM variants aren’t new to the market, but the reason why I have chosen to revisit this model in its more current day guise is due to the fact that NUPROL are now distributing the A&K brand in the UK, and therefore models from the manufacturer should become easier to get hold of from your preferred retailer than ever before!

The 7.62x54mmR general purpose machine gun Pulemyot Kalashnikova, or Kalashnikov’s Machine Gun, most commonly known to all of us as the PK is definitely another weapon that fits bang into the suppressive fire part of Soviet infantry doctrine! Although a new machine gun prototype, developed by Nikitin and Sokolov, successfully passed field tests in 1958 and was put into production at the Kovrov Mechanical Plant in 1960, a team of Izhevsk Mechanical Plant designers, headed by none other than Mikhail Kalashnikov, joined the competition, and their machine gun prototype was based on the well-proven gas-operated rotary-bolt design of the Kalashnikov pattern. Online research tells me that the Kalashnikov and the Nikitin/ Sokolov prototypes underwent service tests in the Central Asian, Odessa, and Baltic Military Districts, as well as at the Vystrel officer training courses in late 1960. The Main Missiles and Artillery Directorate and the Ministry of the Defence Industry preferred the Kalashnikov PK design, and found it to be more reliable and cheaper to manufacture than the Nikitin/ Sokolov offering.

The original PK machine gun was introduced in 1961 to replace the SGM and RP- 46 machine guns in Soviet service. The PKM (Kalashnikov’s Machine-Gun Modernised) was adopted into service in 1969. The PKM was a modernized, improved version of the PK and the upgrades were primarily aimed at reducing the weight, simplifying production, and facilitating easier operation. The receiver cover became more rigid due to lengthwise ribs. The butt was fitted with a hinged butt-rest. The barrel fluting was omitted and the flash hider was changed.

The skeletonised buttstock, pistol grip and folding carry handle on the barrels were originally manufactured from birch plywood laminates. Small accessories and an oil-solvent container could be stored inside butt recesses and at a later stage the buttstock was fitted with a hinged butt-rest. More recent PKM machine guns and barrel assemblies were equipped with a new black glass-filled polyamide buttstock, pistol grip and barrel carry handle/grip.

The PK family remains in use as a front-line infantry and vehicle-mounted weapon with Russia’s armed forces to this day, and the PKM has been exported extensively and produced in several other countries under license.

Laying down the BBs!

So, once again the PKM is an OPFOR AEG covers an awful lot of bases in terms of service longevity, and can easily fit into numerous timelines from Cold War to the current day, especially if you choose the wood-furniture version! It’s genuinely one of the things I personally love about the OPFOR Armoury as one AEG or GBB can easily cover you for multiple scenarios/timeline. Whilst I couldn’t honestly say the A&K PKM fits the mould for a generally skirmish-able AEG (it weighs 7200g and is a whopping 1180mm long!) it’s a cracking piece of kit, and if you collect soviet-era RIFs then it’s most definitely one that you’re going to want to consider owning.

The PKM is put together almost entirely using metal (steel and alloy) throughout, with the skletonised stock, pistol grip and carry handle being made of black high-grade polymer. The bipod swivels left and right and the legs can be lifted and clipped together to hold them in place during carriage. The PKM features adjustable front and rear iron sights which will be familiar if you’re already an AK user already. Overall, the finish is very nice indeed, and the AEG feels solid and well put together; you definitely know that you’ve got your hands on something that’s externally going to be durable and give you good service… but did I mention it’s heavy?

The internals of the gun are also thoroughly workmanlike with a bore-up cylinder and cylinder head, 8mm steel bushings, hi-torque motor, ball bearing spring guide and low resistance wiring throughout. There’s also an adjustable MOSFET which allows you to change the ROF. The well-finished self-winding green metal box on this gun holds an almighty 5000 BBs, allowing you to bring down the heavy rain on BLUEFOR to your heart’s content, and the box can be filled by splitting it as per a drum or via a neat fill port on the right hand side should you need to reload on the fly. The box also holds the battery and connection for the self-winding mech, and there’s lots of space for a big battery inside.

That adjustable rate of fire really fits the PKM well, as you can either set it up with a nice AK chug or have it screaming BBs downrange! The test sample chrono’d very nicely at 1.04-Joule/336fps on .20g RZRs, and I was very pleased to find that the box mag fed very evenly… it must be good old-fashioned Russian Reliability even in airsoft form! In terms of accuracy I was happy; this is supposed to be a full-auto support-beast and be able to spit out BBs consistently and give an area-dominating effect rather than being nail-on-the head accurate, but I will tell you that it’s no slouch in this respect as at 30m prone I was easily able to put all my BBs on target. Walking the PKM from target to target with controlled bursts gave me a good idea of what it’s capable of, and that’s a LOT when it comes down to suppressing your opponent’s fire and movement capability.

Now as I said earlier, the PKM is not a new model, and A&K have been with us for years, but sometimes it’s genuinely worth looking back at a model, especially as they’re now going to be easier to find, and also because the prices appear to be stabilising. I’m seeing the PKM models in the UK around the £450-£470 mark at the moment, and for a big support gun that oozes OPFOR Cred that’s a great price! Having now had one in my hands and on the range, I’ve gone as far as to add one to my own personal collection, and I’m very, very glad that I have!