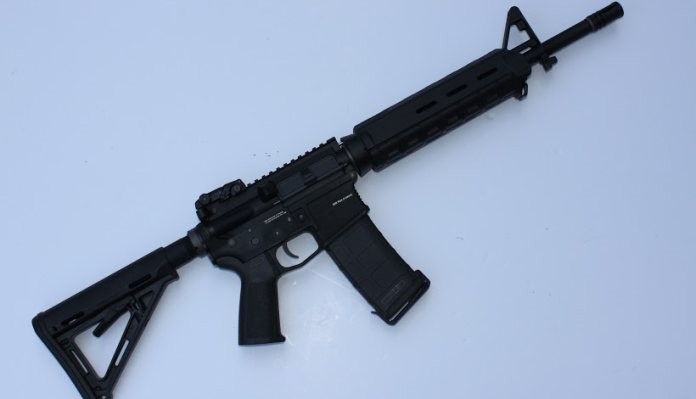 Airsoft to me has always really been about getting together with my mates at a weekend game, enjoying their company and relishing in being outdoors rather than stuck in the office writing reviews!

Of course it’s also been about the replicas, the building, the customising, and inevitably the shooting. I have often asked the question where does airsoft cross over with living history and re-enactment, but although there have been many “super-realistic” replicas purporting to be “training rifles”, and even though these have been endorsed by some pretty well known shooters, I’ve always scoffed a little when it’s been suggested that airsoft could be used to simulate real firearms training.

There are some VERY expensive electric airsoft replicas out there that supposedly are designed as “professional trainers”, but from my experience with them they can be hard to work with, and don’t actually offer all the controls and functions that you would find in the real thing.

I do like gas blowback replicas, and they do offer a semblance of “training” as they benefit from a number of the features that you would expect to find in a real firearm, have a working bolt release, and do offer some degree of felt recoil. That said they are usually pricey beasts that suffer from expensive, finicky magazines that seem to vent gas at the worst possible time. Too cold and they don’t work that well, too hot and they can become overpowered; such is the nature of gas.

However, I recently found myself defending airsoft as a training tool for real shooting sports when I was sent a sample of the new PTS RM4 ERG SCOUT to test by Land Warrior Airsoft in Scotland.

PTS (formerly Magpul PTS) stands for “Professional Training and Simulation”; PTS initially set out with a very focussed licensing agreement with Magpul Industries Corporation in the USA to make high quality replica parts for the airsoft market, and initially had huge success with their product line worldwide. With the rise in popularity of real Magpul products, thanks in part to the excellent training videos from pro-shooters Chris Costa and Travis Haley, many airsofters wanted to set up their replicas like those used on film. Magpul PTS allowed them to do this.

Sadly though, Magpul PTS parts and accessories were soon being cloned in the Far East and sold at bargain bucket prices. Although there was no real official statement, Magpul last year made the decision, to the horror of many airsoft fans, to take themselves directly out of the airsoft market. I can totally understand this decision as a brand must protect itself, and as allegedly fake parts were turning up on real service rifles a tough decision ultimately had to be made.

At the same time, in fact pre-dating the Magpul decision, PTS announced that they would be working with other famous brand names in the shooting world; Advanced Armament Corporation, Battlecomp, B&T Industries, Falcon Industries, GoGun USA, Iron Ridge Arms, Mega Arms, Rainier Arms, Tactical Intent, US Palm, and Young Manufacturing. The focus seemed to have been lost, but the RM4 apparently rekindles some hope in the Magpul/PTS collaboration.

RM4 begins to give away what the replica in question is all about though; think “Recoil M4” here, with the “ERG” standing for Electronic Recoil Gun. Although there have been numerous “electronic blowback” rifles and carbines put to market, true felt recoil was never really achieved, and due to the mechanical nature of the blowback systems involved they would often end up stripping pistons due to their “drag back” nature. Too much pressure on parts led to quick failure and many bad words!

PTS though have worked with the well respected Taiwanese manufacturer KWA, probably best known for their gas offerings to bring together what they call their Kinetic Feedback System, which is housed inside the buffer tube of the rifle. Simply put, each time you pull the trigger the gearbox spring engages the Kinetic Feedback System inside the buffer tube, simulating recoil; the KWA does not feature a moving fake bolt, springs or mechanical connections as such, which bodes well for the longevity of the system.

All About The ‘Feel’ And Function

The recoil felt is about the same as a .22 rimfire rifle (which I also shoot); enough to let you know you have recoil, but not so much as to really throw you off your point of aim. Obviously the felt recoil is not accompanied by any muzzle rise, but there’s enough “twitch”, certainly on full auto that you need to keep things controlled which is a nice touch too.

So, one part of the “training equation” solved. The next part which I really like is a feature that you don’t even find on some rimfire rifles, which is namely a last shot cut off. A Magpul style “PMAG” is supplied with the RM4, and it’s a clever piece of work in its own right. The capacity of this magazine can be changed from 30 rounds to 60 rounds simply by sliding off the outer shell and flicking the marked “30/60” switch! If you’re using it in an airsoft game then 60 is the ticket, a sensible mid cap, but if you’re training, setting it to 30 is just right.

Not only does the magazine give you control over capacity, but it’s also the article that governs the last round cut off. At first glance there is a fragile looking extended follower (there is a Magpul style PMAG cover included to protect it when not is use) which seems to control this, but that doesn’t explain how the rifle ceases to fire even when the empty magazine is ejected. If you inspect the magazine very closely what you’ll find is a small lever to the top rear which rises as the extended follower does; this lever in turn interacts with a corresponding point inside the magwell which disconnects the action until you insert a freshly loaded magazine and slap down on the bolt release. This absolutely ingenious feature only works with the dedicated ERG magazines, but you can use any standard AEG magazines in the rifle unless you want this feature to be activated; a pack of three RM4 ERG magazines is available for just £35.99 at Land Warrior though.

What else does this innovative replica give you? Well, as I mentioned earlier Magpul have for the time being moved away from the airsoft arena, but the RM4 was obviously in development before then and PTS were able to continue with the design!

The PTS MOE mid length handguard splits lengthways to accommodate the battery; front wiring is pretty much essential with the RM4 given the Kinetic Feedback System in the buffer tube. As standard this is fine, but should you wish to fit an after market rail system you need to find one that has sufficient battery space or run the RM4 with an external battery box. The standard handguard though will fit even larger batteries and I happily managed to slide in an 11.1 LiPo with no problem.

With an 11.1 on board this thing just ROCKS! Chrono with .20g “Blaster” BBs gave an incredibly consistent chronograph reading of a touch under 350fps which means this appears to be site ready right out of the box. The rotary Hop is located in the usual place underneath the fake bolt, is easy to adjust, and when set stays in place even with all the bouncing around of the recoil action. I’d usually look at rate of fire too, but the fact of the matter is that when it comes to the RM4 you just plain don’t care as firing it on semi-auto will surely bring a smile to the face of even the most jaded airsofter. The trigger is crisp and positive with just a tiny amount of creep; this is soon mastered, and the thump in the shoulder you experience with every shot fired more than makes up for such a tiny deficiency.

Even with the slightly chequered history behind this rifle what you end up with for just £329.99 is a properly licensed and CE marked item that is more than a little special. If you tot up what the PTS MOE parts and the metal receiver alone would cost the RM4 already looks to be a bit of a steal!

Is this a good replica for airsoft players? No, it’s actually a SUPERB replica, especially MilSim style players who want every ounce of realism they can get. You get first rate build quality, parts and performance, and the added extra of the recoil function. The RM4 already has all the parts that most players would add on after they bought the basic rifle, and the PTS MOE handguard is ready for a foregrip which is easily sourced. The flat top railed upper receiver is just begging to have an optic mounted, and that alone would make the RM4 more than “field ready”. If you already run an M4 variant and have a stock of magazines then these will be fine; I tried standard mags from numerous manufacturers along with PMAG and EMAG realcaps and every single one worked flawlessly.

Going back to the beginning, does this replica change my mind about using an airsoft rifle for training? My answer would have to be a total “yes” as the mild felt recoil, last round cut off, real capacity magazine setting, and the functioning bolt release all add up to making a fine tool, that used correctly could easily be part of a safe, practical, and low cost training regime.