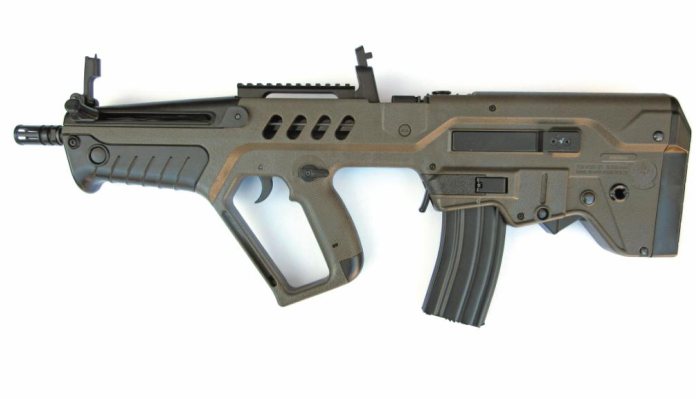 Over the years I’ve been lucky enough to have had the chance to test a couple of hundred airsoft rifles, carbines and SMGs on the range, and although the market is awash with AR and AK replicas there are still a few models out there that are different from the herd and unique in their own wonderful ways. I have always been a fan of the bullpup, and I’ve owned numerous L85s, Steyr AUGs, and even a FAMAS from different manufacturers and all have been pretty solid and dependable AEGs. I love the fact that you can still have a relatively long barrel which is good for accuracy in a very short and compact package which is great for CQB; a bullpup really is a superb compromise.

Back in 2015 I had the pleasure of testing the TAVOR TAR/T21 from Umarex, a budget airsoft replica of the military firearm family that is fast becoming the standard issue weapon of the Israeli Defence Force (IDF). Whilst the old T21 had an awful lot going for it, and was in essence cheap as chips, it did lack some oomph and as much as I loved the design, I passed on buying one. With SMART TEAM INTERNATIONAL INDUSTRIAL LTD (or simply S&T Airsoft) now being distributed in the UK by NUPROL though I had a chance for a return fixture with the very latest airsoft iteration of the Israeli military rifle, and it was not a chance I was about to pass up!

More and more armies around the globe, including the British Army, are operating regularly from vehicles and helicopters so having a short weapon is a sensible way forward. The venerable SA80 has been the bullpup used by UK Forces for some considerable time now, with development having taken place from the mid-1970s onwards. Other countries worldwide were taking interest in the design at that time as well; in 1982, with the experience of many conflicts, mostly mechanised in nature, Israel Military Industries (now Israel Weapon Industries) began a long, direct collaboration with the Israel Defense Forces (IDF) Research & Development teams in order to develop a new standard issue weapon for the IDF. Experience had taught the IDF the hard way that all-arms co-operation was the way forward and their infantry doctrines reflected this.

From 1995 the TAVOR underwent testing unlike anything that had been seen before. The TAVOR began trials for ergonomics (handling and carrying) with select IDF units. Variants went to the IDF NCO Infantry School for extensive field tests and finally, in 2002, the TAVOR was given to an army company in the renowned Givati Brigade for realworld testing and use. By September 2003, the IDF trials concluded and the TAVOR MTAR 21 rifle was chosen as the standard issue weapon for their infantry troops; as of 2009 this issue has been rolling out steadily with full adoption on the cards.

So, the TAVOR is a rifle design that is right up to date, and one that is still, and will continue to be, issued. Many designs, including the SA80, have already ceased production and are due to be phased out just after the TAVOR issue has been completed, so if you want something for a thoroughly modern military loadout then the TAVOR is certainly worthy of your consideration!

Externally, the TAVOR from S&T Airsoft is an totally ergonomic package with a large, well-angled pistol grip which has not a trigger guard but more an entire hand-guard; if you play during the winter months this could be a real bonus as the rifle is easily operated even with bulkier insulated gloves. Ahead of this is a comfortable yet short forend which fills the hand very nicely; this fore-end hinges open when the large button beneath the cocking handle is pressed, revealing a reasonably sized battery compartment. The stock is fixed but even players of smaller stature should find this a comfortable replica to use.

The selector switch is located on the left-hand side of the TAVOR immediately above and behind the trigger and is clearly marked S for safe, R for repetition or semi-auto, and A for full auto; this works very well with an audible click as the modes are engaged. The magwell is located behind the pistol grip and I found that most STANAG or AR type mags worked well. The magazine release protrudes in front of the magwell and is easy and instinctive to use, and a large triangular bolt catch to the rear of the magwell also acts as a springtension release when the AEG is not in use.

Although the TAVOR is built almost entirely of plastic (do bear in mind that the real deal is polymer!) mould lines are pretty much non-existent and everything feels solid as a rock; as it’s a fully licenced replica you get some very nicely achieved trademarks and also a serial number. The TAVOR has a flip-up front sight and a flip out rear sight and these were the only parts which felt a little flimsy; that said the TAVOR has a section of rail on top which screams out for an EoTECH, ACOG, or Meprolight optic. The internals are equally workmanlike; you get a Short Type, high-torque motor, a bespoke custom metal TAR21 gearbox with 8mm bearings, fully upgradeable with a quick spring change design, a 509mm metal one piece outer barrel, and everything is completely TM compatible if you want to fettle it further.

In operation the TAVOR is simply great fun! With either a 7.4V or 11.1V NUPROL battery fitted, both of which gave superb results both in rate of fire and trigger response, testing on .20g RZR BB saw them feeding perfectly from the metal 300 BB HiCap mag that comes with the rifle. I got an average of exactly 1-Joule/329fps which is absolutely spot-on. Range and accuracy were also very good which I had suspected given the length of the inner barrel; once the hop-up was set I was happily hitting Figure 11 targets out to 30-metres plus.

Overall, the IWI TAVOR is a really nice package, and the best bit is the price as you’ll be able to pick one of these up for around £250. It’s a heck of a lot of gun for the money, is wellmade, performs well, and looks great. For me it completes my Israeli collection, and I’ve parted with my pennies to add one to the armoury!

Available in black, tan, or olive green, for more information on the S&T TAVOR 21 and for stockist details please visit nuprol.com.