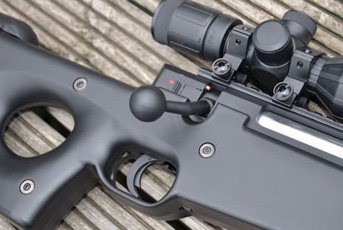 Airsoft is a huge market these days, and devotees of the art are drawn in for a variety of reasons. Airsoft skirmishers of course drive much of the market, but there’s a large band of imitation firearm enthusiasts in the mix too. The model under the spotlight here, the Mauser SR sniper rifle, should appeal to both parties, since there’s definitely an air of authenticity about it. The tie up between Cybergun and Sportsmarketing has seen a plethora of new models hit the market of late, and this Mauser is one of many fully functioning RIFs (Realistic Imitation Firearms) built under licence from famous manufacturers of real firearms.

The Mauser SR is spring powered, and fires standard 6mm plastic BB’s, and I have to say, it’s a whole lot of fun.

‘SR’ stands for Sniper Rifle, and the bold configuration follows that of the sniper specials, favoured by long range military specialists. A plastic thumbhole stock comes complete with a fully adjustable cheek piece, and butt length. A fully cycling bolt, magazine, two stage trigger, and picatinny style scope rail, complete the impressive specification - all contributing to the overall enjoyment factor. At 6.6lbs, it doesn’t feel too much of a lightweight either.

The rifle is supplied in three main constituent parts (plus a sling), with the main action just needing to be dropped into the fully adjustable ‘tactical’ stock, and tightened into place. Once assembled, the magazine then needs to be pushed home inside the action. It’s all very simple, and full instructions are supplied.

Adjusting the cheek piece for correct scope alignment is achieved by slackening the two main allen bolts on the reverse side. To adjust the physical length of the butt, the allen bolts in the pad can be loosened, and the spacers removed as desired. It’s all neatly done for sure, even allowing for the addition of a bipod at the tip of the fore-end, if required.

With no sights included, the fitting of a scope is imperative, along with weaver style mounts to fit the picatinny rail.

Sportsmarketing supplied me with a Swiss Arms Compact 3-9x40 Scope (that comes complete with two different types of mount), and with this securely locked in place, I was ready for action.

Next task was to fill the 28 shot magazine, and for that, a special speed-loader comes supplied. This is first filled with BB’s, then as per the slightly vague instructions, the speedloader is held against the aperture of the magazine, and the spring loaded plunger pressed. After a few unsuccessful attempts, and plastic balls flying about the place, I finally realized that a well placed thumb on the bottom side of the magazine entrance hole, was the way forward! Why the instructions couldn’t have nailed this, I’m not sure, but there we are! Snap the primed magazine into the underside of the action, and you’re ready to go.

Safety is obviously of paramount importance in airsoft skirmishing – but even when practice shooting at targets, never lose sight (good choice of words!) of the fact that BB’s are prone to ricochets. Safety goggles, or glasses, should be worn at all times.

With the Mauser SR prepared and ready, the action can start. Cycling that chunky bolt requires it to be lifted up, back to cock the action, then pushed forward and down. Shots are loaded just as quickly as you can complete that operation, and whilst I did find the bolt a little sticky at first, a familiar routine soon becomes second nature.

The accuracy of this type of airsoft product depends on several factors, with the weight of the projectile being one of the main influences. The rifle came with a sample of 6mm plastic BB’s, and over 10yds, these managed 2inch groups; opening up to around 5 inches at 20yds. However, two other grades of ammo were submitted with the Mauser; lightweight .12gr BB’s and the more standard .20gr (even heavier types up to 25gr are available and probably would suit this ‘long range’ type gun better).

Results with the lightest were unsatisfactory, but with the .20gr chambered, 20yd groups all but halved. At 440fps muzzle energy with 20gr ammo, the Mauser is running a bit on the hot side, so check with site or game organisers for power limits and possible minimum range restrictions for sniper rifles.

The manufacturers state a maximum range of 70metres, but expect velocity and groups to tail off dramatically past 30yds with 20g BBs – using heavier grade BBs should lower the velocity slightly, as well as increasing accuracy and range.

A ‘Hop Up’ adjustment system is included, as on many airsoft guns, where back spin can be imparted to the BB, giving ‘lift’ for longer range and increased vertical accuracy (elevation).

We’re talking fun shooting here at the end of the day, and that of course, is what airsoft is all about.

This Mauser SR costs just under £200, which is good value, and for a sniper’s rifle there’s enough features and performance to make it well worth consideration. It’s a slick piece of design, with authentic looks and feel – and that just adds to the serious fun to be had!