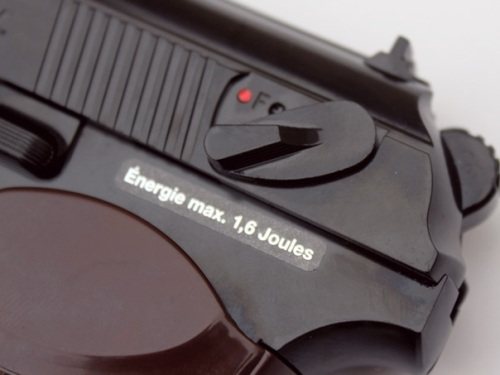 It is a fact that many people get into airsoft not from the playing perspective, but purely due to a passion for historical firearms. Over the next couple of months I’m going to take a look at some great replicas that are available on the market, some of which make great skirmish guns, but some that are just so iconic that they beg to be added to any collection whether you are a regular player, a historical re-enactor, or just someone who likes to shoot!

For the first two categories of owners, legal purchase of a realistic replica firearm is not a problem as a defence in law will be held; sadly for those without such a defence, then I’m afraid it’s a case of the ‘two tone’ route – a partially bright coloured replica – which most retailers offer as an additional service these days. That said, such is the beauty of the historical replicas that it seems a huge shame to have them brightly coloured, but such is the law.

The first model I’m going to look at is one that the airsoft market has been crying out for. Many players follow differing themes in their loadouts – some are into WWII, others Cold War, and a significant amount enjoy their Namsoft. There are a number of Tokarev replicas out there now for the WWII Russians, but to me one important post war model has been missing, namely the 9mm Pistolet Makarova (PM) or Makarov.

The PM dates back in design to 1948 and is named in the Russian tradition after its “designer”, Nikolai Makarov. I use inverted commas around “designer” as in reality the Makarov is really an unlicensed copy of the Walther PP series chambered for the Soviet 9mm pistol round. Once again, as is a Russian peculiarity, their 9mm is a blunt bullet much like the 9mm Short, but with a longer casing. This casing however is in turn shorter than a 9mm Parabellum. The net result of this is that Soviet ammunition is unusable in firearms produced by another country!

Production and issue of the Makarov began in 1949, with production initially at the Izhevsk plant; later the PM was produced across the Soviet Union, and even copied by the Chinese! It was issued for a good 50 years to Military and Police alike, and shipped to pro-communist groups and countries worldwide. Certainly if you’re going for a Cold War loadout then the Makarov is the handgun to have.

In airsoft form the little Umarex ‘Legends’ Makarov is a work of replica art; even the attractive box it comes in has Russian writing on it, and the licenced trademarks appearing on the left hand side are crisp and clear. It’s a hefty wee beast though, weighing in at 352g. It is absolutely full metal throughout, with the brown plastic pistol grips mimicking those of the real thing.

Operation is simple too – the stick magazine is simply loaded up with 14x6mm BBs, and a 12g CO2 caplet is inserted by sliding the pistol grip to the rear. Once inserted the retention screw on the base of the grip is turned and the caplet ruptured ready for use. To initiate firing, the slide is pulled firmly to the rear and the clearly marked safety moved to the fire position. The PM is a non-blowback model so the slide does not move when firing, meaning all the power goes out of the business end! This also means that you either need to thumb the hammer back manually on single action, or just run with double action; luckily the trigger is crisp and light so either option works very well. The simple notch and blade sights are more than adequate and in single action mode great groupings can be achieved out to 10 metres or so. Sadly there is one downside, though, and this brings me back to the power. This is one hot little handgun, chronoing on .20g BBs at a hefty 412fps, which will sadly make it unusable at almost all skirmish sites! That said, at around £69.99 it’s affordable, and it’s a beautiful replica to own and shoot, with classic leather holsters widely and cheaply available online; if you want to bring things right up to date though IMI Defense actually make a modern polymer roto-retention holster that the replica Makarov fits into snugly and securely.

Methinks I’ll have to get into tinker mode to see if there’s any way I can make this skirmishable, as it would be perfect for my NVA loadout!