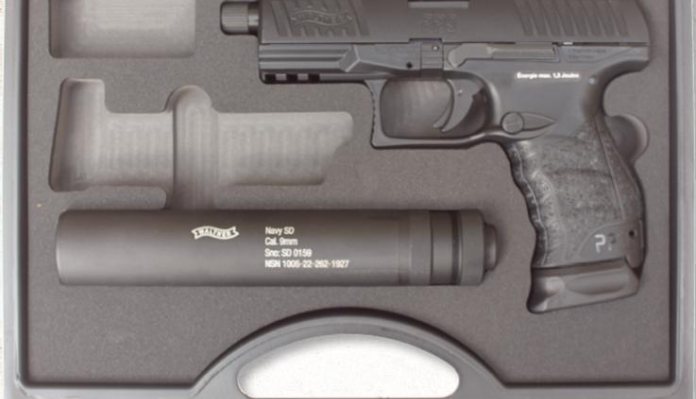 Walther are probably best known for their handgun models, and it’s certainly a firearms brand that is well recognised by the movie-going public worldwide courtesy of that most special of agents, “Bond; James Bond”, as Sean Connery carried the PP model in the 1963 debut movie ‘Dr No’. Since that time, all the ‘Bonds’ have had a relationship with the diminutive PP Series pistol, in the guise of the PP, the PPK, and the PPK/S; even when Pierce Brosnan stepped away from the PP series during his tenure as ‘007’, he still stayed loyal to Walther and carried a P99! I’m certain that as long as Bond films are made the name will continue to stand out, just as it does today.

For more than 100-years, Walther has been a major force in the development of handguns. The firm was started in 1886 by Carl Walther in Zella-Mehlis. The company originally manufactured hunting and target rifles, which were very well respected, but it was not until 1908 that they began to make pistols. Models 1 through 5 and 7 through 9 were in calibres 6.35mm and 7.65mm respectively. The Model 6 was Walther’s first attempt at a 9mm Luger calibre pistol. It used blowback rather than a locked breech and proved unsuccessful, with only around 1000 made, and its rarity has made it highly sought after on the collectors market!

In 1929, Walther began to make the popular Polizeipistole (Police Pistols) or PP models. This was followed in 1931 by the first of the PPK variants, the Polizeipistole Kriminalmodell, or Police Pistol Detective Model. Both PPs and PPKs were manufactured in .22 Long Rifle, .32 ACP (the most common calibre), .380 ACP and a very small number in .25 ACP. The PP models were the first mass-produced pistols with stamped parts, but the overall increase in dependability and high-quality of production with lower relative manufacturing costs made them the best option to replace the P-08 Luger. In 1938 the German Reich awarded the contract for that replacement to Walther for the 9mm P38.

Production at the Neuengamme Factory production ran non-stop from 1942 until 1945, when it was destroyed; Zella-Mehlis, now found itself in Soviet-occupied East Germany, so the Walther company was reduced to just a collection of designs and patents. Fritz Walther started anew and began manufacturing in Ulm, West Germany in 1953, and the company resumed production of the P38 (renamed the P1) in 1957 in order to equip the new West German Army, the Bundeswehr. When Fritz Walther died in December 1966, his son, Karl-Heinz, took over the company, which then concentrated on the sport shooting sector and the introduction of new technologies. In 1993 the Walther firm was acquired by Umarex of Arnsberg, who continue to manufacture under the Walther name in Ulm and Arnsberg.

Following the success of the P99 during the late 1990s, the team at Walther decided to pursue new technologies and new ideas even further and in 2011 they released their then very newest model to the market, the PPQ or PolizeiPistole Quick Defense (Police Pistol Quick Defense). Although not truly a completely new design, as it shares its engineering principles and main features with the Walther P99QA, the PPQ had many modifications – like a re-designed grip, trigger guard and slide with sizeable forward serrations. The PPQ has a glass-fibre reinforced polymer frame and steel slide assembly. It can be broken down into its main parts or field stripped with a clever take-down catch without the need for tools. The main innovation of the PPQ over the P99 variants though was the ‘Quick Defense’ trigger.

The internal pre-set striker ‘Quick Defense’ trigger was a departure from previous models and was specifically developed for the PPQ. Unlike many other trigger systems, pre-set internal strikers have a let-off point and trigger pull that remains unchanged from the first shot to the last and requires no de-cocker.

The PPQ is a true breakthrough in ergonomics for handguns, as the sculpted grip meshes smoothly into the hand. The trigger is probably the finest ever on a polymer, striker-fired handgun. The styling is elegant and trim; ergonomics and fully ambidextrous controls were a key focus in the design of the firearm. The injection moulded grip frame contains four steel guide rails for the slide, and the trigger guard itself is squared off at the front and textured to aid in control. The polymer grip has a texturised ‘HI-GRIP’, non-slip surface on the sides and both the front and rear backstraps and a slightly enlarged magazine well to aid in quick changes. The cross pin that secures the lower end of the backstrap was designed to function as a fitment point for a lanyard. On the sharp end, the PPQ has an integrated mounting MIL-STD-1913 (Picatinny) rail for attaching accessories, such as a tactical light or laser.

Available in 9x19mm Parabellum, 9x21mm, .40 S&W, and the mighty .45 ACP, the Walther PPQ slide and other metal parts are Tenifer treated; this nitriding process provides a finish that is characterised by extreme resistance to wear and corrosion, and that allows the pistol to better endure the effects of extremely damp and even wet conditions. Taking this even further, the PPQ Tactical Navy is a variant that has a firing mechanism that has been modified for operations in and near water. A non standard hole in the striker channel ensures sufficient water displacement if the weapon becomes completely flooded with water. The PPQ Tactical Navy SD is the same pistol as the PPQ Tactical Navy with the addition of a longer barrel with a threaded muzzle for mounting a suppressor.

All About The Licence!

I know that I harp on about licencing, but the truth of it is that when such agreement is in place, the replica that arrives at your local airsoft shop is going to be about as close to the real things as it possibly can be; yes, you might pay a little extra for the licenced version but you can rest assured that what you’re buying is the best it possibly can be. Of course Umarex now own the Walther brand, so you’d expect any of the replicas to be absolutely spot-on. And in the case of the PPQ Navy that’s exactly what you get, a true, fully trademarked pistol that replicates the real thing down to the smallest detail, even coming with an individual serial number correctly inset to the rear of the body.

The finish of the ‘polymer’ is absolutely flawless throughout, and all of the metal parts are equally well finished; even the ‘HI GRIP’ finish on the pistol grip is faithfully reproduced. The real Walther PPQ is 180mm long and weighs in at 695g (9x19mm, unloaded magazine); the airsoft version is spot on at exactly 180mm and weighs 732g, which is as close enough for me given that the C02 magazine gives a little more weight due to valves and the like.

There is, as with the real thing, no manual safety catch, but this isn’t a major issue if your safety and manipulation are as they should be; for safety in an airsoft safe zone it’s simply a case of dropping the C02 magazine out and that effectively takes the ‘engine room’ away, meaning that the replica won’t fire, even if you pull the trigger accidentally. The magazine itself is of full-metal construction, a replica itself of the extended magazine offered for the real-world PPQ; the mag is easy to load, holds up to 30 BBs, and a single C02 caplet will power all of those rounds downrange with ease.

Setting the PPQ up for the range is simplicity itself, as it’s really just a case of screwing a CO2 caplet into the magazine, loading up BBs, and that’s pretty much it! Running the PPQ through the chrono using .20g ‘Hardball’ BBs from ARMEX gave a mean reading of 1.01Joule/330fps although Umarex do say that the power level can get as high as 1.3 Joule/375fps!

As I expected, the Walther is accurate out of the box, giving great groupings at 10-metres. The standard sights have three high-contrast dots and are easily acquired, and the ergonomics of the pistol mean that its sits very positively and comfortably in your hand. The PPQ does feature a hop-up and to access this you just need to drop the magazine out, depress the stripping levers on both sides if the frame and pull the slide forward off the frame. The hop adjustment itself is located immediately behind the spring; moving it clockwise reduces the amount of hop and vice versa, and once this has been adjusted the accuracy is pretty much bob-on.

This really is a lovely pistol to shoot, and with that large magazine capacity it’s perfect as a skirmish sidearm. The suppressor that’s included as part of the package is super as well; made of a lightweight alloy and beautifully finished, again with the correct Walther trademarks, although it doesn’t add to the performance of the pistol it certainly racks up the ‘cool factor’. If you were to leave the suppressor on permanently it would of course allow you to fit a longer inner barrel, and with that in place I do believe you’d have yourself a real ‘sentry nailer’.

You’re going to look at around £165.00 for the PPQ M2 Navy Duty Kit, but for your money you’ll get a really first rate handgun, complete with suppressor and CO2 magazine, and all of this comes very well presented in a lockable hardcase; there’s even space for an additional magazine already cut in the protective foam for you. Basically with this in hand you will be, as certain members of the US Naval Special Warfare community are wont to say, “Good to Go!”

My thanks go to UK Distributor ARMEX for supplying the review sample and test ammunition.