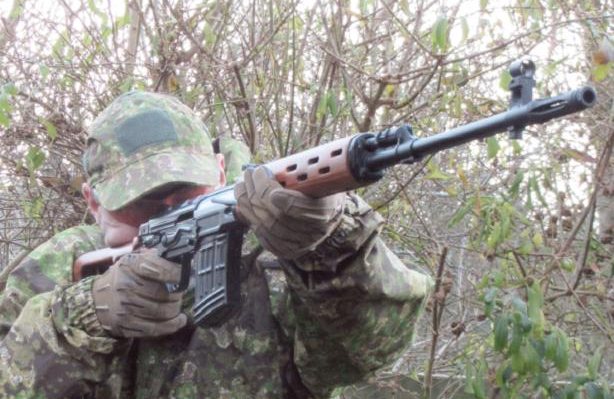 Over the years, I’ve often fancied trying the sniper role in airsoft games but frankly, just as in the real world, it takes a very particular mind-set to perform this even adequately. In an airsoft game, a talented sniper with a higher powered bolt-action rifle can act as a real ‘force multiplier’, reaching out beyond normal engagement distances to remove the threat of a support gunner, or take out a ‘high value target’.

I’m more of a ‘direct action’ type of player and I’ll be the first to admit I just don’t have the patience to crawl around in a ‘Ghillie Suit’, waiting for that one perfect moment. That said, earlier this year I found myself at a MilSim game where playing as OPFOR I needed to engage forces in their Forward Operating Base, or FOB. As good as my beloved AKM is, with it set to 1.2-Joule/360fps I simply didn’t have the range to get beyond the return fire!

It was at this moment that I decided to look again at longer distance options; I wanted something with a little extra power and range, but preferably semi-auto rather than bolt-action, so in keeping with the OPFOR theme, there was really only one rifle to consider and that was the “Snayperskaya Vintovka sistem’y Dragunova obraz’tsa 1963 goda (SVD-63), or Sniper Rifle, System of Dragunov, Model of the Year 1963”, known simply to one and all as the Dragunov.

The Dragunov is a unique rifle for several reasons. First, it was not meant for highly trained and specialised sniper teams, but rather for designated marksmen in an infantry support role. After the introduction of the rifle, the Soviet Army deployed designated marksmen at the basic motorised infantry rifle platoon level. Such marksmen were estimated to have a 50% probability of hitting a standing, man-sized target at 800-metres/875-yards, and an 80% probability of hitting a standing, mansized target at 500-metres/547-yards. For distances not exceeding 200-metres/219- yards the probability was estimated to be well above 90%. To attain this level of accuracy the sniper could not engage more than two such targets per minute; as with all precision-oriented rifles, the user has to take care not to overheat the barrel and limit the use of rapid fire, so this proved not to be such a massive problem in the field.

Chambered in 7.62x54mm and developed in the Soviet Union, the Dragunov was designed as a squad support weapon, since Soviet military doctrine dictated high volumes of fully automatic fire in combat situations; in this situation, long-range engagement ability was lost to ordinary troops when submachine guns and assault rifles were employed. It was selected as the winner of a contest that included three competing designs by Sergei Simonov, Aleksandr Konstantinov and Yevgeny Dragunov. An initial pre-production batch consisting of 200 rifles was assembled for evaluation purposes and extensive field testing of the rifles conducted in all the theatres that Soviet troops would be faced with, from hot and humid jungles, extremely dry desert, and harsh frozen tundra resulted in Dragunov’s design being accepted into service in 1963, and from 1964 serial production was carried out by Izhmash.

The Dragunov is a semi-automatic, gas-operated rifle with a short-stroke gaspiston system. The barrel profile is relatively thin to save weight and has a slotted flash suppressor somewhat similar to the L1A1 SLR. The barrel’s bore is chrome-lined for increased corrosion resistance, and is semi free-floated; since it is connected by a spring-loaded mechanism to the handguard/ gas tube cover, so that the handguard can move with the barrel during firing. The Dragunov has a vented, two-piece wooden handguard/gas tube cover and a skeletonized wooden thumbhole stock equipped with a detachable cheek rest; this can be removed when using the irons sights alone.

The Dragunov’s receiver bears a number of similarities to the AK, such as the large dust cover, iron sights and lever fire selector, but these similarities are primarily cosmetic in nature, as it’s a completely different beast from the standard Kalashnikov. The rifle features adjustable backup iron sights with a sliding tangent rear sight; the sight can be adjusted to a maximum range of 1200-metres/1312-yards. The iron sights can be used with or without the standard issue optic sight in place. The Dragunov was issued with a quick-detach PSO-1 optical sight. The PSO-1 sight mounts to a proprietary side rail that does not block the view of the iron sight line; other AK style mounts will not fit this rail, as the profile is far narrower. The sight also has a variety of features, such as a bullet drop compensation (BDC) elevation adjustment knob and an illuminated rangefinder grid that can be used up to 1000-metres/1094-yards. Several other models of the PSO sight are available with varying levels of magnification and alternative aiming reticles. Rifles designated SVDN come equipped with a night sight.

The features and unusual characteristics of the Dragunov were driven by the tactical use of marksmen; by targeting high-value targets of opportunity and providing special long-distance disruptive and suppressive fire on the battlefield a relatively small number of marksmen could assist conventional troops by combating or harassing valuable targets and assets, such as key enemy personnel like officers, non-commissioned officers and radio operators, exposed tank commanders, designated marksmen and snipers, machinegun teams, and anti-tank warfare teams. This was exactly what I had in mind for my Dragunov!

There are numerous airsoft manufacturers who make a Dragunov replica, and they are all very nice indeed; a friend of mine has a spring version, which is great but of course loses the flexibility of the semi-auto function. I’ve had a chance to play around with a couple of the electric versions too, which have been great airsoft guns but somehow lacked character; most of the electric versions also require upgrading to get true performance from them.

As I am very impressed by the performance of my gas open-bolt AKM, I decided therefore to have a look down that route for the ‘big brother’ and my digging eventually led me to a model from WE Airsoft Europe; two models are on offer in their ACE VD range, one with black polymer furniture and the other with a classic wood effect finish (a wood laminate rather than plastic ‘faux wood’ thankfully!).

The ACE VD with the wood suited me perfectly, and so it was that I ordered one in, and from word go I was thoroughly taken with this elegant yet functional battle rifle. I’ll get this out of the way first; the Dragunov is at 1215mm/48-inches long a big rifle! That said, of course what that also means is that it does have an exceptionally long inner barrel too, coming in as it does at a whopping 620mm/24.5-inches! When you’re talking about an airsoft rifle, one of the things which helps with accuracy and range is barrel length (think smoothbore musket) and they don’t come much longer than this.

Although it is a long rifle, it is far from ungainly; weighing in at 2900g/6.4lbs it’s really not that heavy and is a rifle you can happily carry all day. The construction is metal throughout, and the finish is absolutely first rate, a semi-matt black. The heavy, full-travel open bolt is finished in brushed silver, which looks particularly attractive, and the laminated wood of the stock and handguard also looks spot on. The 20 BB gas magazine is also metal and finished the same as the receiver.

If you are, like me, comfortable with the controls of any of the AK variants, then those of the Dragunov will be completely intuitive; the fire selector lever is moved down from safe to fire, and the magazine is fed nose first, with the magazine release directly in front of the trigger guard. The iron sights are exactly as per the ‘real deal’, with an adjustable leaf at the rear and a protected post at the sharp end. I have a replica PSO-1 sight for my ACE, and NUPROL do a super red-dot replica ‘Birsk PKO’ specifically for it as well if you don’t fancy the magnified version, but let me assure you that this thing is deadly just using the irons! The rifle does come with the removable cheek riser if you do decide to fit an optic though.

Now let’s talk performance; when I got my Dragunov I immediately handed it off to my ‘gas man’ and asked him to do two things. 1) I wanted it as close to my local field’s semi-auto 1.87-Joule/450fps DMR limit as possible, and 2) I wanted the trigger fettled for as smooth a break as possible; when he returned it to me I was getting a consistent 1.79-Joule/440fps on a .20g BB and the trigger broke like glass. What you need to consider here is that the trigger, unlike a battery powered AEG, can be worked on just like the real thing!

With the rotary hop set correctly (easy to do), the long inner barrel, and that amount of power I was of course interested in what the range and accuracy of the Dragunov would be like. Now I knew for a start it was pointless taking it to my little 30-metre range, so I waited for ‘Game Day’ at my local site, ‘Darkwater Airsoft’ in Kent and took it along to their 50-metre range to put it through its paces, and let me tell you, I was in no way disappointed.

Moving up to .30g BBs to get a more solid trajectory, the Dragunov hurtled them downrange with a huge “crack”, which certainly turned some heads! Once I’d dialled the iron sights in I was easily hitting the ‘hub-cap’ targets at the furthest extent of the range, which is exactly what I’d hoped for. When I returned home, much as I hate maths, I performed some basic calculations, which told me that with a .30g BB I should, in principle, be able to send them out beyond 60-metres. Perfect!

All things considered I’m really, really happy with the ACE VD ‘Dragunov’ and it’s exactly the kind of semi-auto “reach out and touch somebody” rifle that I hoped it would be. Retailing for around £400, it’s a fabulous bit of kit and I’ll be keeping it well tuned, mainly for MilSim events… mainly!