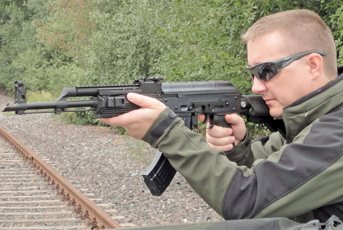 I love the real AK. I have used several around the world and although I like the reliability and the simplicity I struggled to get on with the magazines… in so much as I am knee high to a grass hopper and laying prone with an AK requires me to bend my back in ways only circus contortionists can manage.

I have played airsoft for bordering on 20 years and in all that time I have never owned an AK47 variant of any description for that very reason. I have recently developed an itch that needed scratching so I have finally taken the plunge and bought one. There are so many AK variants to choose from the task could have been mind boggling. My particular kink in airsoft is gas blowback guns. Aside from recoil and noise you would be hard pressed to tell the difference from the real thing. With that in my mind, my choice was narrowed instantly to one company, WE.

WE are a Taiwanese manufacturer and historically their stuff has been below average. In the past couple of years however they have really come into their own with gas weapons making some of the most realistic action airsoft guns out there. I already own most of the WE gas blow back catalogue so I suppose it was inevitable that this one would be WE too.

Always a good start – it turned up when expected. I collected mine from “Ratty” at Badgertac in Westcott, near Aylesbury (www.badgertac.com tel.01296 658600)

I much prefer to collect as a face to face meeting always results in brews, biscuits and some good old fashioned banter.

The packaging is a no expense spent, non-descript cardboard box and apart from two stickers in the corner it is plain brown. On opening the box I was relieved to see that similar expense had been saved on the inside and all the goodies were simply wrapped in a polythene bag and securely cable tied to the box to prevent movement in transit. As my only use for the box from here on in is to get a fire started, I personally have no issue with this at all.

Like most reviewers I had to have a fiddle straight from the box. What I should have done was lube up all the working parts as they are transported with just a thin film of preservation oil on them – but I am sure there has been no harm done.

“What an ugly gun…” was pretty much my initial thought. I knew what I was getting, but even still… it is like when your friend shows you their new born baby and you have to pretend it doesn’t look like a bad tattoo of Sir Winston Churchill. You see, the PMC is a modern take on a traditional gun. The front end is full of picatinny rails for all your attachment needs, be they tactical or “tacti-cool”. The back end has a typical M4 buffer tube and an adjustable crane stock. Although I think the set up is only marginally better looking than Quasimodo I have to admit I did find it very useful being able to adjust the stock to suit my frame. I am starting to think this could easily be my favourite slippers – garish to look at but oh so comfortable to wear.

Stripping this down for “every day cleaning” or in this case, an initial lubing, is child’s play. For anybody with first hand experience of a real AK, close you eyes and go from memory. For those without, try one of these and pretend it is real. Push the button of the recoil assembly through the top cover and place the top cover to one side. Push the recoil rod assembly in to the bolt until clear of the body and withdraw. Pull the bolt to the rear and lift clear of the receiver. The front end is a little more involved due to the addition of some allen bolts, but nothing too taxing and not necessary to do other than for interest.

As far as I am concerned, performance is judged on two simple tests.

Can I use it without modification?

Airsoft sites around the UK have varying rules and regulations on what they deem safe and what they will allow you to shoot at another person. For a fully automatic capable gun the muzzle energy limit is 1.14 joules. Energy is a difficult thing to test for in the field, so instead we play with the formula and find a muzzle velocity, which is easily testable with a chronometer.

Guns are always tested on an industry standard 0.2 gram projectile and you should always get a muzzle velocity reading below 352 feet per second. The maximum within the UK is 350 fps with some sites lowering that further for close quarter arenas to 1 joule or 328 fps with a 0.2g BB. Any gun that is “hot” is little more than a fancy paperweight as all good sites will insist on chrono’ing guns at the start of the day with random checks throughout.

A hot gun is a massive faux pas and can see your details passed to as many site operators as possible after you have been unceremoniously ejected from that day’s activities. To add to the confusion, gas guns like to play tricks on us. Gas is much like me. When it is cold it is pretty lethargic and uninspiring. Get it up to temperature however and it has all the fun of the fair. A gun chrono’d first thing on a frosty morning may pass, but as the day warms up so will the gas and thus increasing your muzzle velocity. To counter this, there are several gasses on the market with varying degrees of power so you can us a less powerful gas in the summer and a more powerful gas in the winter… please don’t confuse the two as you will have a really crappy day either through poor performance or getting kicked.

Do I Want To Use It Without Modification?

Having a bit of experience under my belt, it is easy to tell if this gun will help me in running with the pack or if it will make me the old and vulnerable creature lagging behind. Play style can dictate a gun’s usefulness, but this IS an AK47 assault rifle… I want to be able to at least be on a par with other assault rifles on the field of play.

So, the results are in:

Excellent – I have successfully managed to do exactly what I suggested you should not do!... I have used a powerful gas on what turns out to be a scorcher of a day (the weather was supposed to be colder) and the proof is in the pudding.

These figures give a variance of 28.3 fps between lowest and highest and an average of 407.29 fps. Although I would not be allowed to use it as it is, by switching gas to a lower powered type I could easily bring this down to within tolerance. Alternatively, I can fit an adjustable valve (about £10) which means I can adjust my output at any time I like to ensure I am within limits although there is talk of WE fitting all their European sold guns with a valve at factory level to ensure a guaranteed sub-350 fps limit on a known powered gas (many companies rebrand the same gas so rather than recommending a brand, they are recommending a type).

On to arguably the most important test results, am I happy with it?

To put it bluntly, yes. Range and accuracy were surprisingly good for a brand new gun that is not broken in. This will only improve further as the gun beds in and settles. It has a wonderfully crisp mechanism and a very satisfying “clunk” with each travel of the bolt. The hop up system is easy to adjust with the ‘wheel’ instead of the usual inaccessible grub screw and the selector switch has an extra tab to allow its movement with a single finger without adjusting your firing position as well as, doubling as a holding open device. Fully-automatic is a pretty slow rate of fire but as the magazines hold a low ammo count and my style of play leans more towards the semi-automatic, carefully considered shots instead of “spray and pray”, the full auto function will rarely be used. Another nice touch is that the magazines are cross compatible with the WE AK74. Not technically accurate of real world firearms, but if you have one gun and a stack of mags, it is nice to know that they will still be useful if you diversify your armoury a little. From experience, it is soul destroying having to sell 8 magazines for the cost of 2 new ones, just because you fancied a change!

I play with heavier weight ammo than the 0.2g that we test with, but please remember allchrono readings must be taken with 0.2g BB. Afterwards you can switch weights. After loading some .25’s I started to dial in the hop up to get the balance between range and flat trajectory. I was comfortably hitting man size targets from the standing position at a distance of around 45 meters (paced, not measured). I am confident that with the gun broken in, and my usual 0.3’s or 0.36 BBs in the magazines I will accurately be hitting A3 paper / chest sized targets at distances out to 45 meters. With a few internal upgrades that range can be increased further still.

I don’t particularly care for how this gun looks but I have been left in no doubt that you should not judge a book by its cover. This thing is more than capable of holding it’s own. The wait was indeed worth it. I may look to switch out some of the furniture for the more traditional look but there is no denying it made me smile – lots - and will easily keep pace and even out-perform many other guns.

If you are interested in a gas blow back assault rifle where performance takes precedence over looks (just my personal opinion, you are allowed to love the look of it) then you need go no further than this. GM