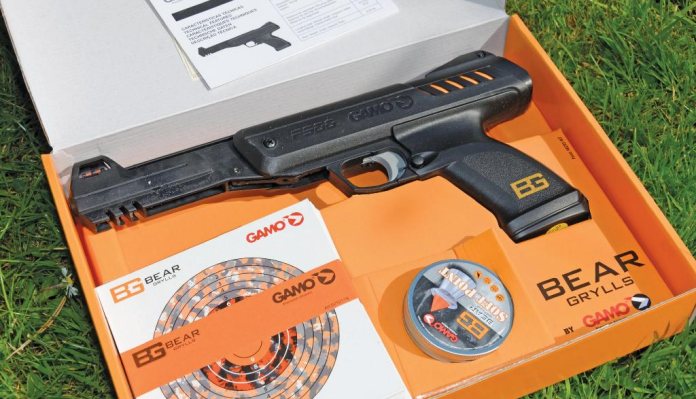 Beginner’s kit is an important part of the airgun market, and just lately Gamo has launched a new range of models, designed to appeal primarily to the younger shots. The Spanish manufacturer has shown some marketing nous too, having signed up Bear Grylls no less, to put his name to a variety of products; and it’s surely a master-stroke.

Product endorsement is common place these days, and with the famous survival specialist and all round outdoor adventurer, ‘on-side’ so to speak, many impressionable youngsters may well be lured in, to our happy world of airguns, for the first time. Anything that helps promote our cause, and swell the numbers within future ranks, must make sense, so this bold move by Gamo, has to be seen as a positive step.

On test here, is the Bear Grylls Survival Pistol Set, and first impressions are indeed favourable, since everything come neatly packed in a bright orange box. The set comprises of a Bear Grylls branded pistol, based on the Gamo P900, a tin of 150 Bear Grylls Soft Point pellets, and 50 BG branded, camo design target cards. Very basic instructions are also included.

The P900 pistol is a traditional spring-piston powered design, and comes fitted with open sights. An orange fibre optic style element is set into the fore-sight hood, whilst the rear sight takes the form of a simple plastic notch. However it’s thankfully windage –adjustable by a small screw in the housing.

Production costs are admittedly kept to a minimum with wide use of synthetics in the P900’s construction, but that said, it has a nice feel about it, which impresses when you first pick it up. The main rear section of the pistol’s body is moulded in two halves, including the grips and integral trigger guard. ‘BG’ is printed in orange on the grips, and with raised panels featuring a stippled effect, and a subtle finger groove on either side, the ambidextrous grips work well over all.

Where the barrel is concerned, there’s a thin steel rifled tube, acting as a liner, set inside a synthetic breech block, and this has been a feature of many models from Gamo. OK; for the purists, having synthetic materials forming the breech jaws means the design may not be quite as durable as steel over time, but remember this pistol’s remit, and such qualms are largely irrelevant. What we do get with Gamo’s favourite blue print, is a super smooth, and slick feeling barrel lock-up, adding to the pleasure of shooting this model.

Breaking open the breech, and compressing the mainspring with the down stroke, is very easy operation, with the only proviso that the pellet is snugly pushed home, (as with any break-barrel), so as to avoid deformation of the skirt. For the most part, I stuck with the Bear Grylls Soft Point pellets supplied, and these were a revelation in themselves, since I hadn’t come across them before. The design sees a bright orange plastic point set into the nose of a conventional waisted lead body, and the result is dramatic looking ammo- again designed to impress any junior shots, lucky enough to get bought one of these BG sets.

Triggers are always an important feature of any gun, and the P900 comes with a pseudo two stage set-up. It releases well enough, but my only gripe concerns the fact that the plastic blade itself appears to be formed from two moulded halves, which come together forming a rough edge; just a little irritating, since the ridge sits right in the middle of the finger. Slightly clumsy design, but given that this detail is the main area I have to moan about, it says much for the effectiveness of this pistol set overall!

Over 10 yds, if I did my bit, then the pistol repaid my concentration. 1.25” over 20yds (from a rest) is a good guide for what this pistol can do, and accepting that any type of handgun is so much harder to master than rifles, I was left quite satisfied with my efforts. Two points of detail remain: once this gun is cocked, it cannot be de-cocked, so it has to be fired, and secondly, a manual safety catch is also fitted, that helpfully shows a red button when the action is ready to fire.

OK; there’s only 150 pellets in the BG Soft Point tin, and a few of those orange points had worked loose, it has to be said, but I know I would have been excited to have received this set when I was a kid. It should be noted as a technicality, that there’s no provision to fit a pistol scope or alternative sighting system to this model! But then, given the remit for this Bear Grylls special, and the young audience it’s aimed at, that’s not to be taken as a major negative.

For as it stands, this Bear Grylls Survival Pistol Set makes an ideal gift set, for any youngster, eager to get started with informal target shooting, and airguns in general. It’s fun, it looks the part, and all importantly, it’s reasonably accurate too; rewarding the novice shot as they develop their skills.