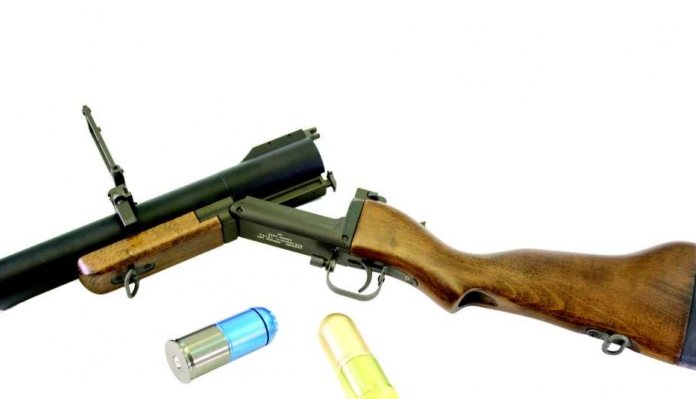 When I was heavily involved in the VNAS (VietNam AirSoft) world the M79 was an absolute must-have for any respectable period loadout. Fast forward a few years and the cut-down version came into use with the SEALs and quickly became known as ‘The Pirate Gun’; so, for current-day airsoft loadouts, the M79 got another chance! Here we have a weapon that many had already written off as an ‘antique’, suddenly rising to the fray when stuff got real!

The venerable M79 first appeared during the Vietnam War; the launcher was an attempt to increase firepower for the infantryman by providing an explosive projectile-firing weapon more accurate and with further range than rifle grenades, but that was more portable than a mortar. ‘Project Niblick’ created the 40x46mm grenade but was unable to create a satisfactory launcher for it that could fire more than a single shot.

Although there were several experiments featuring both rotary-fed and multi-shot launchers, the one design that functioned reliably was a single-shot break-open, shoulder-fired weapon, the S-3. This was refined into the S-5, which resembled an oversized single-barrel shotgun. Unable to solve the problems with the multi-shot launchers, the Army adopted the S-5 as the XM79, and with a new sighting system the XM79 was officially adopted as the M79 on December 15, 1960.

Because of its distinctive report, it earned the nicknames of ‘Thumper’, ‘Thump-Gun’, ‘Bloop Tube’, ‘Big Ed’, and ‘Blooper’ among American soldiers, as well as ‘Can Cannon’ in reference to the grenade size; Australian units in Vietnam somewhat bizarrely referred to it as the ‘Wombat Gun’!

I’ve had several M79 replicas over the years, so why have NUPROL suddenly decided to bring out their own, and I guess the question here is, “why not?” They already produce a super range of reliable gas MOSCARTs (hurrah!) so why not provide the launcher to go with them?

The ‘NP79s’ are indeed things of beauty, and the overall finish and quality of the two samples (one full length and one ‘cut down’) I was sent to try are as good as any replica that I’ve seen on the market to date! The N79 does indeed resemble a single barrel, large bore, break-action shotgun; just like the real thing, it’s a simple design, having only five major parts: the receiver group, a forend assembly, a barrel, a sight assembly, and a stock. The stock is made from wood, whilst all the other parts are of solid metal (unlike some models I’ve had with plastic barrels). The rubber pad affixed to the buttstock to absorb recoil in the original is present, as is the front fixed blade sight; the rear sight on the M79 is a folding ladder-style leaf-type sight, and when folded, the leaf sight acts as a fixed sight for close range, which is perfect.

The ‘cut down’ version has all the same high-quality parts as before, but the butt is cut down, so that it’s just essentially a pistol grip. The forend woodwork is similarly shortened with the leaf-sight frame giving a rudimentary aiming point. Both launchers operate in the same way; you simply push to top-mounted locking lever to the right to pop open the barrel, load your desired ‘MOSCART’ and snap it back closed. There is a safety catch behind the locking lever that lets you load and carry the launcher safely.

I’m going to say: “Well done, NUPROL”, yet again! This is an inspired choice of model to produce and, although they won’t be ‘cheap, cheap’, given the absolute quality, I’d say that any airsofter, whether ‘Nam inspired or wanting to keep up with the latest ‘Team Six’ look will be more than happy to have one of these in their armoury!