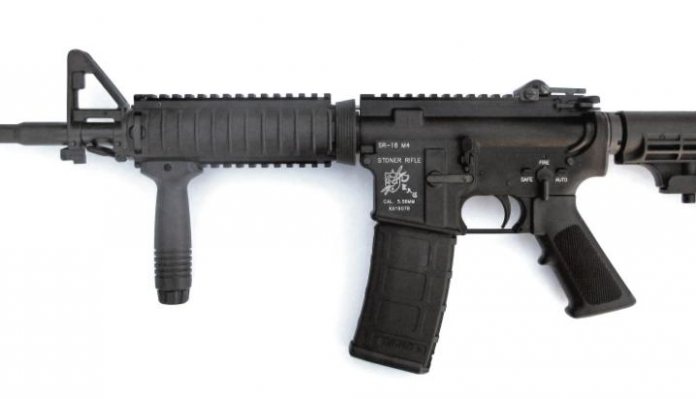 At IWA 2019 I saw and handled some absolutely lovely airsoft replicas, and whilst there were some that offered genuine advances in performance and technology, there was no lightbulb moment, that moment when you pick something up and think to yourself I MUST have one of these; until that was I met his old friend Ray Chang from Vega Force Company (VFC)!

Whilst I was chatting to Ray on the VFC booth back in March last year my eyes as always were in search mode, taking in all the goodies that VFC have to offer, and what my eyes locked onto on the stand was their fully licenced Knight Armament Company SR-16 Gas Blowback Carbine, and it was love at first sight!

Whilst this is not strictly a new model from VFC, it is an interesting one. If you are new to the world of the gas rifle then I am certain you will no doubt, as many do, write them off as things specifically for MilSim players and wannabes, and whilst there is certainly some truth in this, it is also true that numerous manufacturers in the airsoft industry have been working handin- hand with well-reputed firearms counterparts to bring some stunning, fully licenced and extremely effective gas replicas to market, not just for airsoft players, but for professional users in search of training tools.

I’ve long been a fan of gas rifles and carbines and, yes, in large I’ve built these specifically for MilSim events and for general range/reactive target shooting use; the very best of the gas guns replicate the feel and operation of the real thing to a high degree, and as I’m a real steel shooter whenever the opportunity arises, the airsoft replicas also offer a very cost available and effective platform for my training toolbox. I’ll throw into the pot here that from conversations I had at SHOT earlier this year numerous firearm manufacturers are seeking experienced friends in the BB industry with a view to creating training platforms based on existing airsoft technologies. I’ve seen this developing over a few years in truth, seeing some pretty famous names (SIG and Glock for instance) exploring this territory with real intent.

And VFC are an airsoft company who are right at the forefront of gas-operated replicas, with strategic alliances in place to drive forward the gas gun agenda, and they’ve been working with select professional partners including units from the Taiwanese police for some time. Vega Force Company was founded in 2004 and has gained a global reputation for not only being 100% professional themselves, but also for making highly realistic airsoft replicas with custom grade performance instilled in their internal mechanical design, giving end-users a better shooting and operating experience.

And whilst they hold licences with a number of firearms companies to produce 6mm BB-slinging replicas of the very highest quality, the one I will focus on here is that of Knight’s Armament Company (KAC). Now we all know KAC as they seem to have been a part of the tactical and military firearms industry for ever, and their firearms and technologies have definitely been right at the tip of the spear when it comes to the War on Terror. Going right back to 1974 founder C. Reed Knight Jr. began with the intention of developing specialist equipment and weapons for US Special Forces, and initially worked with Eugene ‘The Daddy of the AR’ Stoner, a collaboration which resulted in KAC’s best known product line, the Rail Interface System (RIS). More recently KAC added full-blown firearms to their extensive list of accessories, and like their add-ons, these are highly specialised platforms such as the SR-47, PDW (Personal Defense Weapon), SR-25 ECC, M110 SASS, SR-15, and the SR-16 .

As real as airsoft gets!

So, what to me makes the VFC replica of the SR-16 real? The answer is simple: if you can find a full metal replica of an AR that is 100% exactly like its real world counterpart, that feels, can be adjusted, and operates (albeit from gas and BBs in each magazine rather than bullets and propellant) like a real carbine for the same price, I would love to hear about it!

Overall, the VFC is as close to the real deal as you’ll find in 6mm form, and everything is nailed down to look and feel exactly as it would on the real thing, including the operating system. It has a full-travel bolt carrier group (BCG) with some real oomph, and once again this replicates exactly the operation of the military rifle so your drills need to be 100% the same; for instance the VFC V-Mags only hold 30 BBs so your reloads need to be on point. In addition to luxurious build quality and superb components, the SR-16 also offers realistic take-down; by splitting the receivers you can remove the BCG for cleaning and maintenance, again, just like the real thing.

But what is beauty without performance? I’m pleased to report that the SR-16 has both. I initially took the carbine to my usual 30m woodland range to chrono and test, and in terms of power I got a consistent 1.35-Joule/382fps on a .20g RZR BB using green gas, and with .30g RZR BBs the accuracy was stunning at that range. Now Ray told me that they’d been hitting A4 sheets at twice that distance, so never one to be put off by a challenge, I duly fitted the SR-16 with my Vortex Strike Eagle 1-6X24 optic and headed back to the woods. Measuring out 75m I secured one of my own home-made A4 targets and had at it prone… suffice to say that the A4 came home with numerous x-thirty 6mm holes drilled in it!

I honestly have fallen in love with the VFC SR-16; I’ve changed out a number of accessory components such as the pistol grip, stock, and rail covers, and added a holosight with a flip-to-the-side magnifier so it feels right for me. Now that I’ve used it and had some serious rangetime with it, this feeling has only been reinforced, and I honestly, genuinely love it to bits! There are many gas rifles and carbines out there now that simulate the real thing, and many of them are very, very expensive beasts; having now shot the SR-16 on regular basis I can tell you that it will perform as well as the best, and you’ll find it with most good dealers for under £350!

In closing, this is by no means your average airsoft gun and for this reason I don’t believe you’ll be seeing it regularly at Sunday Skirmishes, although I will be sure to give it a run out just to see if my drills and accuracy are as good as I think they are! Going head to head with hi-cap players on a normal skirmish day with a GBB and 30BB mags certainly adds a little something to the day, but the range, accuracy, and reliability of the SR-16 makes this viable. It’s also, unlike some, gas-efficient on full-auto although with limited ammo you’ll want to pick your engagements carefully.

My thanks again go to my good friend Ray at VFC (vegaforce. com) for being part of this article, and also to the guys at uk.redwolfairsoft.com for facilitating delivery of the SR-16 to me.