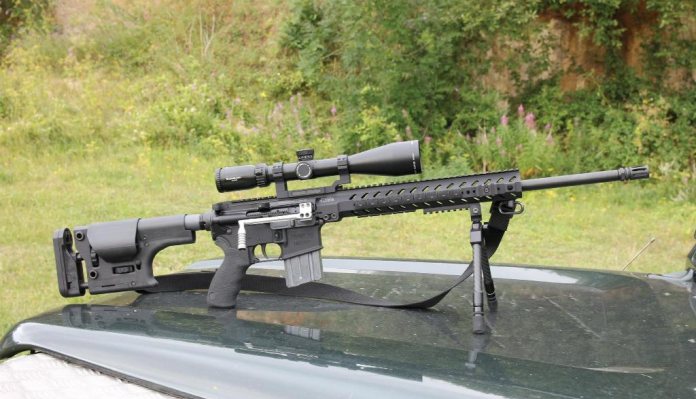 LMT (Lewis Machine & Tool) probably came to our attention when their 308 AR-type semi-auto rifle was adopted by the British Armed Forces as the L129A1 Sharpshooter, a designated sniper/ marksman rifle. Importers Law Enforcement International (LEI) were soon getting enquiries to see if a manually-operated, straight-pull version was available and it was! I tested the 308 gun in 2013 and it was a shooter and operated reliably with its T-handle system.

But the LMT is also a switch-barrel system, which allows for barrels of different calibres to be used, providing they use a common case head. For example, a 308 chassis would also handle 243 Win, 260 Rem, and 6.5 Creedmoor etc and in 223 Rem you also get 300AAC Blackout. I was speaking to Garry Hardinges from Defence Mechanisms (DM) who works closely with LEI and he told me that it would not be a problem producing barrels to suit in either cut or button rifled styles. It also uses a monolithic (one piece) upper receiver/forend construction, so offering a stable optics platform and stronger general build.

Rifles come from LMT purpose-built without a gas system, so are UK-legal straight-pulls, however they do not modify the receiver and retain the forward assist and case deflector and T-handle cocking.

Gary has now perfected a side cocking system for the LMT range that uses a drop down block to clear the case deflector and forward assist that accepts the SGC handle with its adjustable lever. This requires the ejection port to be machined back to give a full operating stroke, and also removes the lower face of the deflector, without any ill effects!

In 2014 I was sent LMT’s 233SP, a 16” CAR15-type in standard T-handle format, which proved as shootable at the 308. I prefer 20” barrels, as I reckon they get the best out of the calibre, so was pleased to receive LMT’s Ultramatch. It came modified with the side-cocking conversion as described with a 20”, mid-weight, stainless steel, cut-rifled barrel with a ½ x28 UNEF thread and A2 flash hider in 1-7.5” twist rate with 5R rifling form. So a word about that first.

Conventional rifling uses 4 or 6 opposed lands (raised sections) with parallel sides, which means the bullet is compressed on both sides. 5R reduces this deformation by using five lands, which are positioned opposite the grooves (lower sections); essentially it’s kinder to the projectile, which should result in better performance. A second feature is the sides of the lands are angled out from the top, which makes cleaning easier as there’s less build-up of debris at the base, which is the hardest bit to access properly. It’s not that conventional rifling doesn’t do the job, it’s just 5R might do it better. To check this I also shot the LMT up against my SGC Speedmaster, which has a conventional 1-8 rifled 20” H-BAR tube with the same selection of ammo. We shall see!

What’s In The Box?

The Ultramatch comes from the box with LMT’s 20”, monolithic, slim line, free-float upper receiver/ventilated forend and a pack of Picatinny rail sections and rubber gripping panels. Forged Mil-spec lower with mil-spec buffer tube, SOPMOD telescopic butt, LMT 2-stage trigger and Ergo soft pistol grip. Also included are detachable/adjustable iron sights (always a plus), new style barrel torque wrench, 20-round (Colt-style) magazine, sling and two, push-button QD swivels. There are four corresponding mounting sockets in the rail and two on the butt. Optional is the aforementioned side cocking conversion, which leaves the forward assist in place. Normally this would add £180 to the bottom line, but currently this is free summer special in with the price. Regardless of free or not I’d say get it!

The Ultramatch is very much a standard AR with a left hand safety/selector lever. The 2-stage trigger gives the usual longish take up with a 4 lbs break that’s just a tad mushy but light and readable enough. Certainly better than the standard, mil-spec pull, which does little for shootability! The Ergo grip is textured rubber and a lot slimmer than the Magpul M1AD unit and positions the trigger finger were it needs to be. LMT’s SOPMOD butt is similar to VLTOR’s IMOD unit with angled, ambidextrous cheek pieces that are hollow and double up as storage compartments. It offers a solid and comfortable head position and adjusts and locks out securely.

Also included was LMT’s DMR (designated marksman’s rifle) butt, which is essentially a telescopic version of the Magpul PRS (Precision Rifle Stock). It’s adjustable for LOP and comb height with an ambidextrous angled cheekpiece; a useful alternative, though not cheap. Also, the Devil Dog, bolt-on left hand cocking system which is rather clever, I will be looking at these two it in more detail next month.

Overall a sweet AR and not too heavy and with all the build potential to shoot well. I teamed the Ultramatch up with a new ATHLON Midas BTR 2.5-15 50 scope (on test this month) and a Spartan Precision Picatinny adaptor along with their Javelin Mk II bipod and a forward grip. Feeding a 1-7.5” twist would be interesting; my 1-8” Speedmaster shoots 55-grain bullets well, all the way up to 77s. Ammo choice went to PPU 55-grain FMJ, 69-grain GGG (Sierra BTHP Match) and Hornady 75-grain HP Match factory. Reloads - Nosler 60-grain BT, Sierra Tipped Match King (TMK) in 69 and 77-grains and Hornady 80-grain A-MAX.

Accuracy with the 55s proved a bit spotty, with an average groups size of 2”, sometimes tighter but never consistent; not that surprised as that extra ½” of spin was probably a bit too much for those smaller pills! The Nosler 60s proved the LMT could shoot with sub-1” @ 100m, with both the GGG and TMK 69s cutting the 0.75”. For some unknown reason the rifle did not like the Hornady 75s with 2-3” scatterings of shots, whereas my SGC Speedmaster did at .75”. However, the LMT settled down again with both the 77-grain TMKs and the 80 Hornady A-MAX reloads punching 0.5”. I’ve never used 80s in my rifle before and was also surprised how well it shot at .75”; however that tighter 1-7.5” twist rate aced my 1-8” tube as can be seen. So it’s safe to assume the Ultramatch can shoot, given this was a brand new rifle I’d say once it has run in a bit I would expect better from it with the loads it really liked.

T-handle operation proved easy up to the 69-grain ammo, though as I said not ideal for action-style shooting. However, the 77s and 80s, which were pushing a lot more weight of metal in relation to the calibre showed hard extraction, fitting the side cocker solved that but you could really feel the chamber grab before the case was broken out. Some of this I put down to a new gun as my Speedmaster was far slicker, though still required a tad more effort with the 80s, but it has had at least 1000-rounds through it and I’d imagine the LMT will be the same.

Though the Ergo grip gives good finger positioning, it’s not very wide and in this area I like girth as well as length. The LMT DMR butt proved very good, but it does add a weight penalty and near £300 to the bottom line and their standard, VLTOR-style unit is a practical design too. To swap the barrel, lock the bolt open and undo the twin screws on the underside of the rail in front of the mag well with the supplied tool. Looking from the right, the rear only needs slacking off, but the front must be removed, as it locates in a slot in the underside of the chase to give physical retention. A little tip; the barrel won’t fully come out if the QD slings swivel are in place at the front as they block it. Return to zero was 100%, hardly surprising given the practical method of retention.

Overall, a good rifle and more than capable for most needs. Price-wise it’s in the upper AR15 bracket but not as expensive as some and Defence Mechanism’s summer special means a free side-cocking kit, which saves £180.