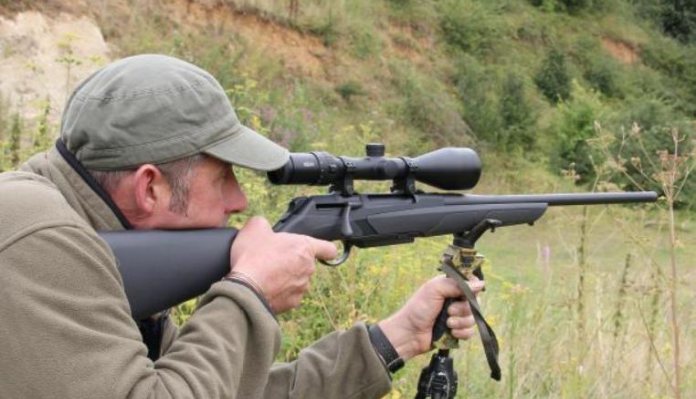 It was July 2012 that I first tested Merkel’s then radical Helix straight-pull rifle, now, four years later and as a Blaser R8 owner (probably the most popular rifle of this type) I’m having another look. At the time, Merkel made a big thing about the gun, with its launch surrounded by a deal of smoke and mirrors and in truth it was certainly different!

Merkel are perhaps best known for their double and combination rifles and traditional shotguns and their most modern product was the turn-bolt actioned KR1. A design that took its visual queues from the Blaser R93, which I feel was no coincidence! Good shooter but it never quite floated my boat, apart from its more practical tang-mounted safety and lack of de-cocker.

Apparently the Helix concept was not Markel’s but came from a member of the Abu Dhabi Royal Family; one Sheikh Hamed. He wanted to see: ‘a rifle ‘for the 21st century’ – light, easy and safe to use, capable of handling a range of calibres, which could be broken down quickly, without fuss or tools for easy transport.” So why not a Blaser R93/R8, Strasser or Mauser M03, as they fill all the criteria, except they need a tool to change the barrel? Plus there’s the kudos of designing something different!

I have to say Merkel came up with an elegant and efficient design that offers a fast (tool free) barrel change and a slick straight-pull action along with some unique features, which looks and feels a bit like their SR1 semi-auto. The aluminium receiver encloses the whole of the bolt, with the only openings being the ejection port and mag well. Operation is by a drop-down handle on the right.

Handling-wise, it gets over ‘bolt fixation’, a common thing on unenclosed receivers; here, as the bolt comes back, it tends to make you break your stock weld, as your brain thinks it will hit your face. Also, and as with any straight-pull action, it’s a linear-only, two part movement, which also serves to disturb the shooting position less than the four (two linear, two radial) of a turn-bolt!

The bolt is a rotary, 7-lug design that locks directly into the barrel extension, which is cammed IN/OUT of engagement by the push/pull action. This movement uses a 2-1 mechanical advantage, so the actual travel of the handle is surprisingly short and fast, with an easy feel and positive ejection. For example, a full action stroke that can easily cycle a 308 or 30-06 cartridge translates into a 2.25” handle movement, open to closed. It takes a bit of getting used to, as when it closes, it feels you should be further forward!

Like the Blaser, the Helix uses a cocking/de-cocking lug (kickspanner) instead of safety catch. Positioned at the rear of the action it slides up/forward to FIRE (cock) and by pushing an inset button springs back to SAFE (de-cock). It’s typically firm in operation, like the Blaser R93/R8s and some might find it a bit of a struggle from the firing position! When de-cocked, the action is locked but you can push it up about 2mm to open it.

Furniture offers the option of wood (various grades) and synthetic. The stock is in two parts, the butt shows a 14” length of pull (LOP), medium height, straight comb, with a full pistol grip and rubber recoil pad. The forend tapers towards its angled tip and shows a rectangular cross section, panels of laser-cut chequering are set in the usual places on the timber, with textured sections on the synthetic. QD sling studs are fitted though the front; one is in the tip, so no good for a bipod! Both the forend and pistol grip sections have cheeks that cover the action sides.

Feed comes from a single column, box magazine in 3 & 5-round options. It locks by catches either side of the well and drops free when released. The teardropshaped operating handle is long and drops down near vertically, with a slight out turn and back angle, and is easy to get on to and manipulate. Its front and rear faces are chequered for grip. The trigger is adjustable and offers a soft and light pull that in use feels a bit flat even with its 2-3 lb break, there’s no set function either!

The reason for this I feel is the way that the firing pin is released. Normally, it’s positioned in line with the chamber and moves forward to contact the primer. Due not doubt to the internal build, the pin is literally flung up from the floor of the action and forward by a pair of hinged arms, almost like an external hammer. I’d guess this increases the lock time a bit, hence the flat feel to the release.

Though conjecture, the build of the Helix seems to take its inspiration from a number of other makes. The receiver has integral Weaver bases much like the Sauer 202 and does not need specialised mounts, so saving money. The barrel slides into the receiver and locks by a lever, similar to the Browning BLR Take-Down. Finally, the enclosed action, rotary bolt and straight-pull system are reminiscent of Browning’s Acera. Truth is, there’s very little new under the sun and many modern designs have cherry picked individual features from older concepts and I don’t have a problem with that!

Clever is the barrel change system. There’s a button under the forend that allows it to slide off, which exposes a lever on the left side. Pull it down to vertical and the barrel slides out of the receiver, complete with the bolt head (action closed) or without it (action open). There’s a slot in the side of the reinforce that aligns with a lug in the chase for fool proof indexing and insertion. Not so clever is the fact there’s no instructions or obvious way to remove the bolt, which makes full cleaning problematic without attempting major disassembly!

The Helix was supplied with a Meopta Meostar 3-12x50 R1r scope and a B&T Tiger muzzle-mounted moderator. I added some of the new Winchester Extreme 150-grain 308 Win and it comes up as a reasonably light and handy package.

Recoil from the normally snappy 308 was not as bad as I expected and the action proved smooth and reliable with no primary extraction issues and a joy to use – 10-points to Gryffindor! The ejection port is slim and I found that you can’t just drop a round in and close the bolt as it has to be mag-fed, as you can with some other designs

The barrel change is superb and I really appreciated the tool-free design and I’m pleased to say that there was no perceivable deviation from zero at 100m. The bolt head just rotates out by turning it from 12 to 2 o’clock and there are red witness marks to ensure you’ve got it right. So, and unlike most other switch barrels, no faffing around pressing buttons and catches as well as removing the bolt first. The 22” barrel shot an average of 1”+ with the Winchester Extreme so good enough! My gut feeling is it can do better but the Meopta scope has a large, dot aim point that does not do a lot for precision placement!

I have two niggles; one - the de-cocker was firm to operate when the action is cocked, as its release button is very small with a strong spring; in fairness, my R8 is similar. Two - the lack of being able to easily remove the bolt for cleaning. As luck would have it I’ve been invited by Merkel to a Monteria hunt in Portugal latter on this year and doubtless we will be using Helixes and I feel that their straight-pull action and general shootability will prove to be ideal guns for this sort of work.