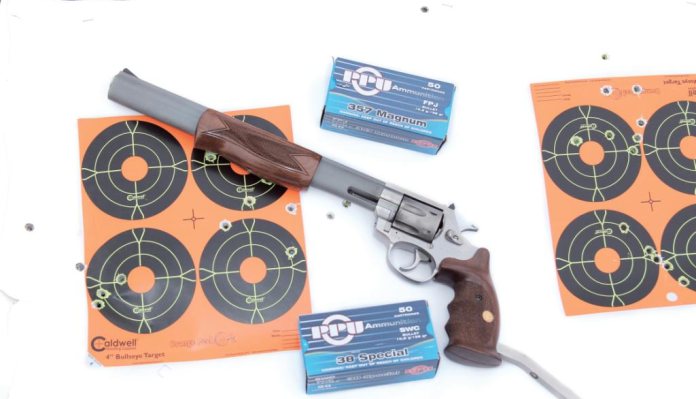 Since the handgun ban, the fate of pistols in general has been in the wind. Given the fact a post ban handgun has to be a minimum length of 24-inch butt to muzzle, with a barrel no shorter than 12-inches, means that their evolution has taken a rather specific path. Achieving this 12-/24-inch split has resulted in two hybrid designs, one of which is far less efficient and pleasing than the other.

This is simple; wind in a barrel long enough to make the whole thing 24-inches, the end result is something that balances and handles like a boat anchor and looks like a cartoon pistol!

Option two however, seeks to have the shortest barrel length of 12-inches and compensates by adding a fixed extension to the rear of the grip frame, for the full 24-inches. Feel, handling and shootability are much improved, though not ideal, but hey we can’t do much about that! Being a pre-ban handgunner, I’m not enamoured by either type but without doubt the 12/24-inches design is far handier and also enjoyable! There have been many attempts to offer shooters this sort of equipment and adding to this list is the Alpha Carbine from Merseyside Armoury, run by Terry Geary, an old pre-banner like myself!

ALFA-PROJ is a Czech company that started manufacturing in 1993 and offers their modern ALFA doubleaction revolver in a number of formats, pistol, carbine and rifle. On tests here is the UK-legal stainless, carbine version in 38Spl/357 Magnum, probably the most sensible calibre choice for the UK market! Ammo is plentiful and cheap, and of the two, 38 is potentially more accurate and easier to control! I thought the gun looked familiar, as just after the handgun ban two guys, Tim Hannam and Graham Gill, were talking about a revolving carbine and showed me what I now know to be an ALFA, though it had a wooden butt and vestigial forend. The ALFA on test, which in UK terms is a long barrelled revolver (LBR) shows just the forend and no wooden butt; instead, the now familiar fixed and vestigial butt extension rod. However, I can hardly call it a coat hanger, as it’s a big and solid square steel bar. Looking at ALFA’s website shows that you could, if you want, fit the standard butt, so turning it into a revolving carbine. But most won’t bother, preferring the more pistol-like handling of the model we see here.

It arrived in a padded, plastic carry case, along with a comprehensive cleaning kit. The butt was replaced by a set of decent, textured, walnut, semi-orthopaedic grips with finger grooves and a slight palm shelf, along with a removable forend. The build shows a heavy, 12-inches, full lugged barrel, a style started by Colt with its exceptional Python revolver and later picked up by Smith & Wesson in their L-frame guns. This puts weight forward and makes the piece more controllable and potentially accurate, certainly if double action shooting.

Build quality is good, with a matt stainless barrel and a standard finish frame and cylinder. The cylinder swings out to the left and is released by a push-forward catch behind the left hand shield. If you are not familiar with this sort of mechanism, let me explain and for those that are, bear with me! The cylinder is opened to expose the six chambers, which can be loaded singly or by a suitable speed loader; a device that holds six rounds in a quick release clip for an en-bloc reload, an absolute must for competition shooting, then as now!

The mechanism shows an external hammer, which is operated by a double action (D/A) system that allows two sorts of trigger control. In D/A mode, you start with the hammer down and come up on target and squeeze the trigger all the way back. This retracts the hammer and releases it to fall and fire; conversely, you can opt for single action (S/A) mode. Here, you thumb-cock for each shot and a lighter press on the trigger fires it.

In use, D/A is faster, as you can roll off six shots quickly, but it does require more effort and poundage to do so, which makes this mode potentially less accurate. In S/A, the break is light and easy and the pistol is usually more stable in the hand but operation is a lot slower. In the old days, revolver triggers were the big custom item for completion shooters and gunsmiths. My old four-inch 357 Mag Colt Python was probably the best production revolver ever, with its Camelot Deville action it offered the slickest D/A out of the box! I could roll off all six shots quickly and get them inside a three-inch circle at 25-yards! Back then! When you are empty, you just unlock the cyclinder, flip it out and push the ejector rod that kicks out all six cases at the same time, ready for the reload.

The ALFA shows a pleasing medium frame design and good build quality. The trigger is a bit firm from the box but workable and I have no doubt easily slicked up by a competent smith. Sights consist of a Smith & Wesson-style rear unit. This shows an adjustable U-notch, using screws for both windage and elevation. The front is a ramped blade that looks to be replaceable by a small grub screw in the rib at the muzzle. It’s also possible to get a scope base that can replace the irons, so you could fit a compact red dot; much beloved of the old ‘Open Division’ Practical Pistol shooters.

This optic does improve things, as shooting a handgun and aligning the front and rear units is a skill that takes some learning!

The timing of the Alfa was pretty good, as in a revolver there’s a lot going on! When you pull the trigger, a small vertical lever (the hand) is pushed up to rotate the cylinder 1/6- turn, which at the same time has to be unlocked by a lug called the cylinder stop. If these components are not in sync and well fitted, the chambers will not line up exactly with the rear of the barrel (forcing cone) and the bullets will spit lead and jacket material sideways as they try to enter. You always get a bit of blast at this junction, which is unavoidable, as there must be clearance for the cylinder to freely rotate.

Though no fan of the long barrelled hybrid handguns, I rather liked the ALFA and spent an enjoyable afternoon shooting it. I used PPU 38 Spl and 357 Magnum. Both use a 158-grain bullet, which is very much the standard weight, though the former is a lead semi-wadcutter (SWC). This has a tapered, flattipped nose cone, with a ring behind it, so it’s easy to load, yet will cut neat holes for easy scoring. The 357 uses a fully copper-plated, truncated cone pill to reduce fouling, as it is faster, so giving more recoil and side blast. For most shooting, 38 Spl is the best choice, plus being a straight-walled case either calibre is easy to load and components are plentiful.

There’s an old joke that goes “How do I get to Carnegie Hall?” The answer? PRACTICE! Well, shooting a handgun is just like that and I was way out of practice, as I have not shot one seriously since the ban and that was a long time ago and it showed! However, testing was done off the bench supported at 25-yards to see what it could do. Given the short sight radius and the fact you have to try and focus on three things, which is impossible, as well as keep the front blade level and central in the rear U-notch and place it on target it ain’t easy. Then, add in the disturbance of D/A operation and the fact in competition you are shooting unsupported and it just gets harder.

But it’s great fun and a bit addictive and at the end of the day I’d burned through 200-rounds and really enjoyed myself and showed some slight improvement over my shotgun-like groupings. Best group of the day was threeinches (supported); the worst, well, let’s not go there! The ALFA ran reliably, though I did find that when ejecting the occasional case hit the left hand thumb shelf and sat there. If this were my gun, I’d relieve that area a bit. But overall, no complaints, as it’s a nice piece and well worth a look if you’re thinking about getting into new age pistol shooting.