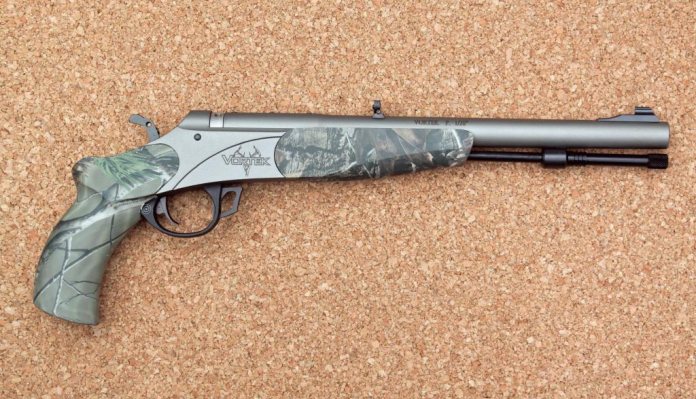 Every so often, a gun comes along which is a little bit out of the ordinary, can appear a little quirky, and doesn’t seem to be applicable to any shooting discipline on this side of the Atlantic. Possibly dismissed at first glance by many shooters, further exploration often proves the old adage that you can’t judge a book by its cover. The Ardesa Vortek pistol is just such a gun. Marketed under the Traditions banner, the model is aimed at the American market, where it will doubtless be utilised as a hunting tool.

Over the years I have had the opportunity to use several firearms produced by the Ardesa company from Spain. Their products are often viewed as being at the budget end of the market, where quality control might be expected to fall short of that from the larger and, it has to be said, more expensive offerings from other European manufacturers. My experience has shown me that this is not the case and the Ardesa products provide extremely good value for money and are particularly suited to those who are perhaps a little less serious in their shooting and are looking for some enjoyment without spending big bucks on a gun. Having said that, this pistol comes out in the same price range as the company’s in-line rifles, so some may consider it expensive. But whatever your reason for buying an Ardesa, you will not be disappointed.

The pistol is based on the successful Vortek rifles that Ardesa have produced for several years and which have proved a hit with American hunters. The version we have here is definitely meant for the outdoors, with its camouflage stocks and Cerakote finish to the metal. The stocks on this model are soft touch synthetic with a Realtree pattern, but for those who may prefer wood, the Henry Krank website shows this option at a slightly lower price. The grip is fairly large, so will accommodate those with big hands but it did not seem a problem for a lady shooter.

The photographs in the Ardesa catalogue show this pistol without fixed sights and fitted with a base and scope, while our pistol has a fairly basic but quite effective set-up. The front sight is a tapered blade topped off with a white dot, sitting on to a base with a sloping, serrated rear edge; the unit is screwed into the barrel and the rear is a neat little folding item dovetailed into the barrel and adjustable for windage and elevation. These can both be removed should you wish to fit some glass and the barrel is ready drilled and tapped for a base. If you decide to go down this route, then an ambidextrous hammer extension is provided to aid cocking.

Ardesa describe the receiver material as LT-1 alloy, said to give strength with weight reduction, and the barrel is made from Chromoly steel. Both of these components have the above mentioned Premium Cerakote finish, which they describe as “the best coating on the market for resistance to highly corrosive black powder, cleaning chemicals and any weather that Mother Nature can throw at it, including salt spray”. The remainder of the metal parts are black, including the two-piece aluminium ramrod/cleaning rod, which is slung under the thirteen-inch tapered barrel.

The photographs will show you that this is a shotgunlike break-open design, and depressing the rather large button in the front of the trigger guard drops the barrel. This exposes the screw out Accelerator Breech PlugTM which accepts standard 209 shotgun primers. The plug is fitted with an O-ring to eliminate blowback and can be screwed out by hand in three full turns. Should you experience difficulty in removing the plug, then a tool is supplied to help.

At the rear of the trigger guard is a cross bolt safety button which blocks the trigger. This is half of a two-fold safety system, the other being an internal hammer block that prevents the rebounding hammer from engaging the frame mounted firing pin unless it has been manually cocked. At over 18-inches long, this is a big pistol and although I think it has nice lines, trying to hold it with two hands and using that forearm proved rather awkward, unless you are shooting from the hip, something that might well be discouraged on most ranges. It would doubtless benefit from being used at a bench with a rest. Nevertheless, using a standard two-handed grip the pistol did not feel overly front heavy and was comfortable to shoot.

Fifty calibre handguns are, to say the least, not particularly common on UK shooting ranges, so it was little surprise that, on both twenty-five yard ranges where I took this pistol, almost everyone was intrigued and wanted to try it. While only a couple really expressed any interest in buying such a gun, everyone had a smile on their face after shooting it. On both occasions, I very quickly expended the 50 balls I had taken with me, so any thoughts of testing for accuracy disappeared. Around 95% of shots went on to a piece of A4 paper, regardless of the shooter, so there is little doubt that the pistol will be capable of a decent performance under more rigorous testing conditions. I would like to see what a competent shooter could wring out of this gun using the projectiles it was designed for – lead bullets in a plastic sabot – with a full powder charge and a scope.

Ardesa’s recommended maximum charge for this pistol is 70-grains of black powder, which I presume would probably propel my 179-grain lead ball out to well over the range that I was using for this test. With the shorter range in mind, I dropped the charge down to forty grains, and although this is not a particularly heavy gun, recoil was minimal. The trigger has a fairly light let-off and broke cleanly with no creep.

Loading is very straightforward, powder followed by patched ball down the barrel, but the big plus is the ease of using those 209 primers instead of percussion caps. The gun closes with a nice solid feel and operated faultlessly on both occasions. A couple of patches were pulled through the barrel every ten shots, a job made very easy by the removal of the breech plug, which came out without the use of the tool supplied. This design would also prove to be an advantage should you need to remove a ball from the barrel for any reason. A big plus on these guns is that they are truly ambidextrous with no knobs, bolts or catches on either side.

Like a shotgun, removal of the forearm – held on by a screw – allows the gun to be broken down for cleaning or maintenance. There was only the barrel and breech plug to clean, as there was absolutely no powder residue blown back into the receiver. Out of curiosity, I removed the bolt holding the pistol grip on to the frame and could not help wondering if it would be feasible to make a detachable stock to turn it into a carbine. Then again, you could just buy the rifle version.

So, is this a bit of fun or a serious tool? In truth, it could prove to be both, particularly if you lived in the USA and wanted to use it as a hunting gun. Over here, the fun side would likely be uppermost and it does not disappoint in that department.