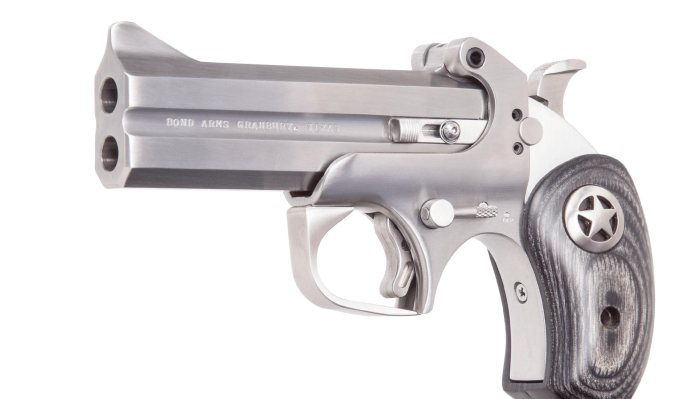 Derringers have been around since 1866 and are a famously compact pistol, usually with over and under barrel configuration and therefore offering two shots. The Bond over and under style Ranger II pistol on review here is typical of the Derringer style and fulfils every need for a humane dispatch pistol in the UK. Strong, light and compact, this stainless steel pistol has interchangeable barrels, which avoids the need for bulky revolvers with restricted cylinders and the simple over/under barrel layout takes the guesswork out of discharging a round.

The Bond is a single action pistol, so the hammer must be cocked to fire barrel one and cocked again to fire barrel two. To load the gun, the knurled rod on the side of the frame is operated to release the barrels, allowing them to be tipped upwards. There’s a spring loaded extractor mechanism positioned between the barrels on the left-hand side for lifting the cartridges clear once the barrels open.

A push-through cross bolt safety is positioned just above the grip. This safety feature is something not found on revolvers, so another good reason to go for the Bond. The grip scales are laminated and there is a little finger rest at the base of the grip for one hand operation, however for .357 upwards I would advise a two-hand grip.

Barrels can be easily changed by removing the hinge pin (Allen screw), lifting the barrel out and replacing it with the required calibre barrel.

Veterinary surgeons and licensed equestrian workers may use a 4.25 inch barrel in .38/.357 (as featured in this article) for dispatching horses or other domestic farm animals. Although many veterinary surgeons may only need a .32, there is no doubt that a .38/357 will do the job equally well; a light .38 special cartridge would be suitable.

Deer stalkers and hunters may also use the 4.25 inch barrel in .38/.357 calibre. The .38 Special is ideal for smaller deer such as muntjac and roe, while the .357 magnum has a case 1/10th of an inch longer and will deliver the extra energy required to dispatch larger species of deer or wild boar in the UK. European boar are larger and a .44 or .45 would be more suitable. The Bond already has a choice of .44 and .45 barrels, with a smooth bore .410 on the way.

I have also tested the .22LR version; the shorter three inch barrel makes it light and compact and the ideal tool for dispatching caged foxes at close range. There is no recoil to speak of and the large fore-sight and rear frame groove work well, however at close range the sights are unnecessary.

The longer barreled .38/357 works flawlessly and accuracy is good, but it is not a 25 yard target pistol – this is a tool for close range dispatch.

Since the pistol ban in 1997 many stalkers today have never used a pistol, but the Bond Ranger II is a cinch to use. I could teach anyone the rudiments and safe handling of this pistol within a very short time.

As a matter of interest, the difference between the original Ranger and the Ranger II (as tested here) is that the original doesn’t have a trigger guard whereas this MkII version does although it is easily removed if you prefer.

Any person with good reason may apply for a humane dispatch pistol. Parliament have never stated the capacity or the calibre of a dispatch pistol and felt that the user was the best judge of what to use. I recommend the .38/.357 and expanding ammunition for both these cartridges. Many times police have granted a .357 pistol but conditioned the firearm certificate for .38 special only, even though the bore of .38 and .357 is the same, only the cartridge length is different. Apply for both cartridges and use the appropriate one on the quarry you are dispatching.