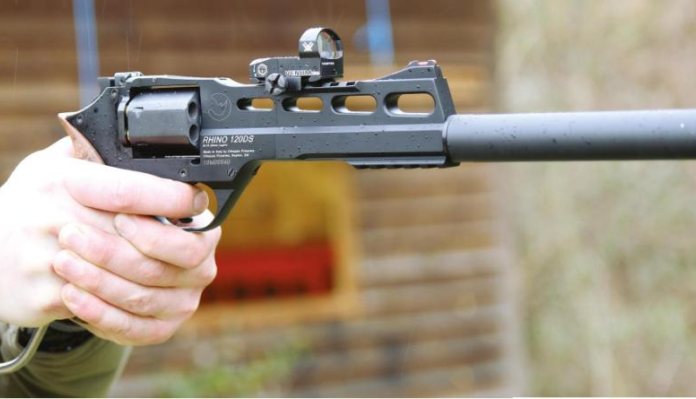 Firearms design is a funny old thing, as are the ideas that drive it! With many seemingly good ones rotting like old cars in a junk yard, named; ‘the solution to the problem that does not exist’. However, sometimes there is a better outcome further down the road. Back in 1984, I was shown two new handguns – the original Glock 17 (plastic frame, that will never work!) how little I knew then, and a rather weird hybrid revolver called the Mateba MTR-8.

Developed by Emilio Ghisoni, it looked like a reasonably conventional wheelgun at the front but mated at the rear to an L-shaped, semi-auto pistol-like frame. Ghisoni’s idea was to move the hand up as high as possible over the bore line to reduce recoil/flip and to a degree it worked. With an integral hammer, safety catch and loading with a unique, 8-round, full moon ammunition clip, it was different.

It never caught on, and Ghisoni went back to the drawing board, and designed the Mateba Autorevolver. Yes, I know what you’re thinking; a semi-automatic wheelgun, Webley tried it with their Webley-Fosbery Automatic Revolver and it truly was the solution to the problem that did not exist. The Autorevolver was, well different, I know as I have handled one, but what it did was offer a radical approach to recoil control, as the barrel was moved from the traditional 12 O’clock position to 6 O’clock.

This results in directing the force up and back through the shooter’s wrist and arm, so making it more controllable.

The Mateba is now a rare and expensive collectable, as Ghisoni died in 2008 and the gun with him. However, not before he was hired by Rino Chiappa (Chiappa Firearms) along with Antonio Cudazzo where they designed the Rhino double-action (D/A) revolver. Which, for a wheelgun concept, is truly radical and, for that matter, workable.

In the UK, we now accept that to own any form of legal handgun it has to be a minimum overall length of 24” with a barrel no shorter than 12”; welcome to the world of long barrelled pistols and revolvers (LBPs & LBRs). Overall length is usually taken up by a fixed rod attached to the grip frame (coat hanger) to achieve the preferred shortest 12/24” layout. Restrictions also apply to calibre, as in semi-auto LBP format it can only be a 22 rimfire, but as an LBR it can also be any suitable centrefire; like 38/357 Magnum etc. Up until now, all LBRs have been of the conventional Smith & Wesson, double action (D/A) with swing-out cylinder, or Colt single action (S/A) fixed cylinder, gate-loading type builds, but the Rhino dares to be different.

I actually find the look and feel pleasing and I don’t really like LBPs. The frame is a hi-strength aluminium alloy with the shield rear of the cylinder cut-out (standing breech) being a steel insert for obvious reasons. The 12” barrel, with dummy moderator, is inserted into the lower section of the forward frame/ shroud, which shows a tall, ventilated rib above with a Picatinny rail for optic mounting and another below for lights and lasers.

But it doesn’t stop there, the hand-filling, walnut pistol grip is quite vertical, a bit like a saw handle, complete with finger groves and a high back strap for the web of the hand. At the rear, is the vestigial coat hanger, which is about as unobtrusive as you can get. I would love to get the chance to shoot this gun in its original format, as I reckon it could have been a contender back in the day! The cylinder release catch is a pull-down lever, top left of the rear frame and you flip the cylinder open to the left as usual. The Rhino incorporates a cocked hammer indicator, which shows as a red plunger that appears to the left of the rear sight plate. In S/A mode, it rises as you cock the hammer and stays up until the trigger is pulled; in D/A, it rises and falls as you roll the shot off. When cocked, the cylinder release catch cannot be operated.

Another of Ghisoni’s legacy’s is the slab-sided, 6-shot cylinder, which cuts down on mass, weight and width without compromise. Although a conventional D/A design, in that you can trigger cock or thumb back the hammer for an S/A shot how, the Rhino approaches this is just a bit different. The actual hammer is fully enclosed and what looks like it, is in fact a cocking lever for S/A operation and a de-cocking if required.

If you want the more accurate S/A shot, pull back on the cocking lever until it clicks, which indexes the cylinder and cocks the internal hammer. When you let it go, it springs back to its original position; here, the red indicator pin is raised, indicating that the gun is ready to shoot. To de-cock, pull back on the lever, take the weight and press the trigger to lower the hammer.

The trigger is broad and curved and fits the finger nicely and in both S/A and D/A modes the pull is light with a crisp release; obviously, D/A is a tad heavier, as you are cocking the hammer and rotating the cylinder as you start the movement. The swing-out cylinder is 100% conventional, with a spring-loaded ejector star connected to a thumb rod to kick out the empties, it rotates clock-wise. Timing is good with no side float or cylinder misalignment and near zero spitting, this is where particles of lead and unburned powder ‘spit’ from the sides of the barrel/cylinder gap. Chiappa has also cut a relief channel under this area, doubtless done to reduce the build-up of debris.

Sights are modern with a fixed, ramped, red fibre optic up front and an adjustable U-notch at the rear of the top strap flanked by green rods. In the world of Practical-type pistol shooting, they offer instinctive and fast alignment. For the test, importers Raytrade UK Ltd. supplied a compact, Vortex red dot, which very much suited the Rhino too.

Calibre-wise, the Rhino is offered in 357 Magnum (which can also use 38 Special), 9x19mm (9mm Luger/Parabellum) and .40 Smith & Wesson. Raytrade wisely bring in the 38/357 and much to my surprise and pleasure, the 9mm too. You might not think that this traditional, rimless, semi-auto pistol cartridge would work in a revolver, but it does, using an item called a full moon clip. This is a simple, pressed steel star with cut-outs to engage the 9mm case head that offers the correct headspace distance as you have with a rimmed design like 357 Magnum. In effect, you have a one-piece, en-bloc speed loader, as you drop the whole thing in and eject it all in one.

For the test, Raytrade supplied Remington’s UMC 115-grain FMJ ammo, although with this calibre they show the option of 124 and 147-grain loadings too. Like most firearms, it’s just a matter of finding what it likes. To fill the clips, press the rimless section of the head into the C-shaped cut outs, open the cylinder and drop the whole thing in, it’s fast and easy. Your firing mode will, to a degree, dictate accuracy; in D/A, you get the speed, as you roll the shots off, but more gun movement as the trigger is operated. In S/A, it’s slower, but shot release is a lot more stable. There is, however, a middle path, and with a mech as sweet as this one it’s easy enough. Start the D/A pull and, with practice, you will feel the cylinder index and lock; stop there, realign your sights and then squeeze. It’s a tad slower than full D/A but it offers a far better trigger release for accuracy and you can soon get a good cadence going.

Whole of the moon

The unload is equally sweet, as the cases + moon clip come out together and they have enough weight to fall, with nothing catching as they come out. The biggest pain is getting the empties off the clip, but Chiappa has that covered, as they include a plastic tool that slips over, and you can then ping them off. They also give you three moon clips as standard, but I’d definitely get more. Cheaper and more robust than a conventional, rimmed speed-loader they do the job, and if anything, slightly better, certainly on ejection.

Overall, I really like the Rhino and that’s from someone who hates LBPs generally. And, if I were to compete in Practical/ Action-type handgun events again, it would be my choice and in 9mm too.