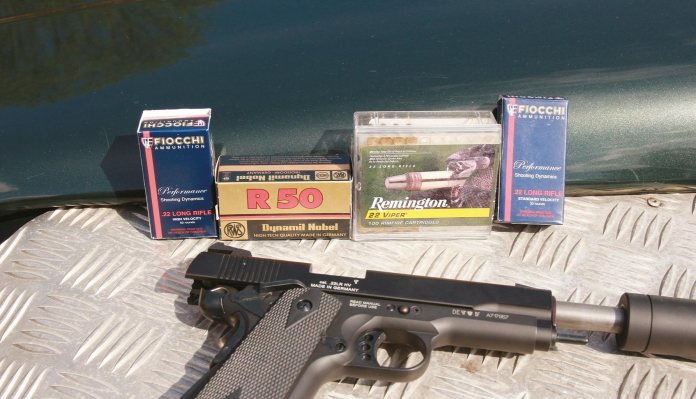 I still remember buying my first Colt 1911 A1 pistol way back in 1981 for the princely sum of £175 from The London Armoury. Though I have owned many semi-auto fullbore pistols the old 1911 (I had three in all) still has a special place in my heart! But that’s history however, there is an alternative and though not a true pistol the ‘Large Firearm’ has taken that roll since the handgun ban for shooters; old and new!

This strange name was one outcome of the pistol ban and stated to be a Section 1 no firearm could have a barrel shorter than 12” and be shorter than 24” overall. I call it the 12/24” rule and it soon became apparent to the more creative amongst us that a more balanced design could be the outcome over an ungainly and impractical 19” barrelled pistol! So was born the Long Barrelled Pistol (LBP). Centrefire revolvers came first but the growth area that is still expanding is the semi-automatic .22 rimfire pistol-type.

Barrel length aside the biggest change was the fact that all the LBP had to do was to be 24” long and it did not need a conventional butt as in a big lump of wood at the back. Instead a permanently fixed metal rod was incorporated into the rear of the grip, so giving the ultimate in minimalism while obeying the law. These became known as wrist braces or my favourite ‘coat hangers’!

Since this breakthrough we have seen any number of LBPs and one of the early ones was German Sport Gun’s GSG – 1911 and I heard both good and bad things about it. Since then GSG has changed with Edgar Brothers now distributing and also it seems they have taken a look at their products and upped their game considerably if their MP40 and StG44 .22 rifles are anything to go by!

The 1911 is a dead ringer for the original apart from the skinny, 12” tube poking out of the front and the slim coat hanger with tapered ball end at the back. Finished in black including the grip plates it shows what I would term more race gun credentials with some practical changes over the old military build. There’s an ambidextrous safety that sits at the rear of the frame which are easy and instinctive to use. As you draw the thumb rises up and wipes the safety to FIRE then remakes the hand grip.

A feature near unique to the Colt 1911 is its ‘grip safety’ which is a press-in section at the top/rear of the grip. This locks the trigger/hammer and disengages as you make your firing grip, in this case it’s of the upswept, competition-style variety. Complimenting this is a Commander hammer, which has a rounded/shorter (bobbed) and skeletonised spur. This last is supposed to decrease lock time as its lighter and therefore should fall faster!

On the left of the frame by the trigger is the magazine release button, again ideally placed for firing hand thumb. Mags fall free to speed up the reload, but whoa there! They are made of a zinc alloy with a plastic base plate extension and I would not recommend dumping them on a hard floor as they are likely to break! So treat them with a bit of respect is all I’m saying! The trigger is also lightened by holes and offers a modicum of adjustment via a small Allan screw. From the box the pull was acceptable with maybe just a tad of creep. The only other control is the slide release lever that doubles as the automatic last round hold open. Again easily and naturally operated by the firing hand thumb, it’s the standard, short-style I was expecting an extended version to compliment the safety!

Sights too are more Practical than Service; with a high, fixed U-notch that can be drifted left and right for windage correction, a small Allen screw holds it in place. The notch is flanked by two green dots, up front a medium blade with a single dot for line up. GSG includes four different heights so you can adjust elevation, an Allen key is provided along with other tools and a brush.

One aspect of 99% of these 22 rimfire LBPs is the fact that the designers obviously felt that the long and skinny barrel sticking out of the slide was not that photogenic and I have to agree. So they threaded the end and fitted a dummy, moderator casing, so giving a silenced look. I suppose they look slightly less weird, but then again anything that has to be 24” and still be seen as a handgun is far from normal. Given the 1911’s barrel is removable it might add a degree of stability - as we shall see the gun was shooting very well!

With the coat hanger GSG have taken a slightly different route. Most other makes seem to attached directly into the rear of the grip frame, but the 1911 has what I can only describe as an extended mag chute loop that is fixed to the frames side that mounts the rod. The consequence of this is the standard 10-shot magazine is too short to be pushed up inside, so a ½” plastic base plate is fitted to take up the length. On that point and unlike the original pistol the GSG incorporates a magazine safety too, so with the mag out the hammer is locked.

The action is as you might expect is a blow-back, in that there’s no locking just the weight of the slide and spring holding the chamber shut at the time of peak pressure then being blown open to eject and reload. On that point the mechanism is single-action (S/A) meaning the hammer has to be cocked for the first shot and released by pressing the trigger and is then re-set by the reciprocating slide. This is as opposed to something like the IP226 which is double-action as it has no safety so can be carried with the hammer down on a full chamber and squeezing the trigger cocks then releases the hammer for the first shot. I prefer the latter as a cocked and locked carry means a more accurate first round away!

22 semi-autos of any type can be very ammunition fussy, a factor often exacerbated in a shorter barrel so I always run a cross section of different types through any gun I test. Most recommend high velocity but my findings have been that yes it can work well but a heavier bullet seems to get the job done better, certainly with standard velocity loads which tends to give greater accuracy potential too. I used Fiocchi standard and high velocity, along with RWS R50 Match (not quick but consistent) and some old Remington Viper, which is a 36-grain Ultra HV load that leaves a rifle barrel at around 1400 fps.

The 1911 shot them all equally well, though the Viper was the least accurate! Much to my surprise the RWS R50 Match, which was at least 10-years old and hardly aimed at pistols ran 100% too. I of course discount the occasional ammo-related stoppage that is unavoidable in ammunition as mass-produced as 22 Long Rifle. Accuracy was also very good, off the bench it was shooting an inch, though 2” high at 25-yards, to solve this you need a taller foresight to bring the aim down, unfortunately the highest one was already fitted, I just aimed low to suit! Overall I was pleasantly surprised and then impressed by the gun’s shootability and for that matter reliability! I reckon I put about 400-rounds through it with no real problems!

With any 22 semi-auto mechanism ease of stripping is paramount, which was a problem with GSG’s first rifle the 522 (ex GSG5) which had the action running in a casing that was screwed into the receiver. Given this component was Mazac (a zinc alloy) not a recipe for longevity! The 1911 strips pretty much like the original with one difference. Remove the magazine and moderator and pull the slide back until the tip of its catch is underneath a tiny cut out, then push it right to left. Then push out the flush pin behind it (right to left). Now take the largest Allen key and remove the Allen screw from the right of the frame. The slide/ barrel pulls off, you then depress the plunger at the nose of the slide and rotate the barrel bushing (looking from the front) to 9 o’clock, which allows the spring/plunger and barrel/bushing to pull forward and out. Reassembly is the reverse but be aware that to get the slide back fully into position a small lever at the top of the frame needs to be pushed down first.

Overall a well priced and effective .22 LBP, I have just been told by Edgars that the next batch from GSG will include a rail under the frame for lights and lasers!