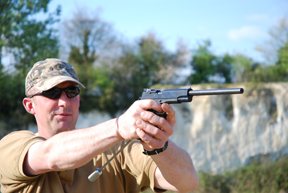 I’ll lay my cards on the table now; I have never cared for what might be called the bastard offspring of the handgun ban! By this I mean the fact that to be a Sect 1 (large firearm) the smallest a gun can be is 24” butt to muzzle with a 12” minimum barrel. This over the years has spawned some truly horrendous equipment from the long barrelled revolvers with tubes near 19” long, to the revolving carbines that were neither fish nor fowl.

This last group grew into a design that paid strict, but anorexic attention to the law and offered a simple rod out of the rear of the grip frame and a 12” barrel. In this way you complied to the 12/24” law but in a minimalist manner. Probably the best compromise, but still just that. For me as an ex-handgunner I could not get my head around these hybrid pistols and chose not to bother; that is not to say I have not tested a few over the years.

I know people own and use these things and more power to them; as if you’re enjoying yourself then it’s fine by me! But like I said - not for me! However, I could just be tempted by the new offering from Peter Hathaway Jones, owner of Low Mill Ranges. Pete is now offering a Colt 1911A1, 22 rimfire semi-auto copy from Ivor Johnson in 12/24” format. Already I can here credit cards coming out of wallets!

The gun is made as a Sect 1 with a 12 ¼” barrel and with the extension rod/counter weight making the overall length to 25 ¼”, so well within requirements. This is not a converted Centrefire handgun as the slide is the dedicated rimfire unit as offered by Ivor Johnson in the USA. The grip frame remains the same 1911A1-style though as we shall see shows a few go faster bits.

My initial reaction was, “Oh yes, very nice, but look at that extra length front and back.” Though I was intrigued, as I had not fired any form of 1911A1 since the ban and despite the extra it did feel pleasantly familiar and I was a bit excited. But first…

The layout was as expected. On the left of the frame is the safety catch, which flips up when the hammer is cocked. In front of this is the slide release catch; both of these controls are extended for easier manipulation. The rear of the frame shows a straight (1911-style) back strap. Above this is a an upswept grip safety, more on that later and the hammer is skeletonised.

At the base of the grip is a big magazine chute, with the extension rod fitted to it. The magazine catch is at the rear left of the trigger guard and is a simple, press-in button. The grips are the old-style chequered wood, with the Ivor Johnson Owl head logo cut in. The slide is longitudinally grooved along the top with front and rear gripping cuts.

The front sight is a medium height/width blade set in a dovetail and the rear a Bomar-style unit, which is fully adjustable for windage and elevation. This is very much an example of a modified Colt 1911A1 from the middle/late 1980s before Practical Pistol lost its way with red dots, race guns and all the daft rules and calibres.

Most pleasing was the fact the pistol offers, as standard, a 15-shot magazine capacity. I was expecting an 8-round design, but this is 100% better. There are however a few anomalies on this 22 model when compared to say a centrefire 45 ACP.

Loading is simple, press the mag button and pull the mag out of the grip. Filling is easy and it doesn’t stack up that much towards maximum capacity. Slide the mag back in until it locks in place, here the mag chute does not do any favours as the magazine base plate does not have an extension/bumper on it so you need to get your finger up there to make sure it’s fully home.

Now pull the slide back all the way to the rear and let it go, which will chamber the first round. Before going any further flip up the safety catch and you’re cocked & locked, in Condition 1!

By this time I was quite excited and flipping off the safety with my firing hand thumb I squeezed the trigger. The break was around 3-4 lbs and very easy, and the 1911 popped most pleasingly. The first mag full was just plain fun and the pistol ran as sweet as a nut. The major difference here is that after the last round there is no automatic holding open of the slide as you get on the centrefire, but hey who cares?

This means you have to retract the slide by hand, hold it rearwards and flip up the hold open to lock the action back. Also different was the fact that the mag does not drop free when you press the button, this could be down to a new gun that is not run in, again no big deal. After a few more mags full I was hooked and started getting some of my old handgunning skills back.

To its credit the 1911 was pretty reliable over a good range of ammo from sub-sonics, standards and hi-velocity fodder. At about 300-rounds it started to show a hesitancy in chambering the first round from a full mag, but this was sorted by stripping it and cleaning the slide etc. I reckon I must have put around 500-rounds through it in all! Accuracy was good and with SK High Velocity hollow points off the bench at 25-yards it was holding an inch, which is good for a handgun. Likewise, free standing you could put the rounds where they needed to go inside a two inch area.

Equally pleasing was the balance and weight, though considerably heavier than a standard 1911A1 the pistol sits solid and stable even with a one-handed hold. But for me it was the good old Weaver-style and I had a lot of fun on the more frangible targets at my disposal.

To be honest, and though I hate the long barrelled look with its counterweight, after a few mags I tended to forget this was not a normal handgun. It would be possible however to fit optics, as there are a number of scope mounts that simply replace one of the grip plates to offer a Weaver-type rail over the slide, so red dots or extended eye relief scopes would not be a problem. Likewise, if you don’t like the wood there are any number of replacement grip options. Truth is with 1911s the world is your oyster much like Ruger 10/22s and AR15s.

Action-wise this 1911 rimfire is a straight, blow-back system as opposed to firing from a locked breech like the centrefire version, which makes disassembly slightly different. You start by removing the mag and pulling back the slide so the lug of the hold open catch is positioned in the small, semi circular cut out behind the locking slot in the slide.

With a plastic hammer or similar tap out the end of its axis pin from right to left and pull the catch out of the frame. Now pull the slide/barrel assembly forward and off. It’s here you notice that the slide is aluminium alloy and not steel. Barrel removal is a bit fiddly as you have to push the recoil spring and rod all the way forward and hold them out of the way against the spring. Next remove the rubber washer from the end of the rod then drop the barrel down at the breech end and pull it rearwards out of the bottom of the slide.

If you try to do this with the rubber washer in place it’s very tight and awkward, as I discovered… Reassembly is just the reverse of the job; rod and spring in place held back, slide in the barrel and allow it to engage in the slide. Pull back the recoil rod/spring again and insert the rubber washer and you’re done.

Over the time I had the 1911 I let a few other shooters try it out, and seeing the smile spread on their faces as they capped off mag after mag said it all. At £1200 + this pistol is far from cheap. However, consider how much you would be paying for a customised Ruger 10/22 and that is not going to give you much change from a grand. But to be able to get what is near enough a 1911, albeit in 22 LR is for many a far more attractive proposition!