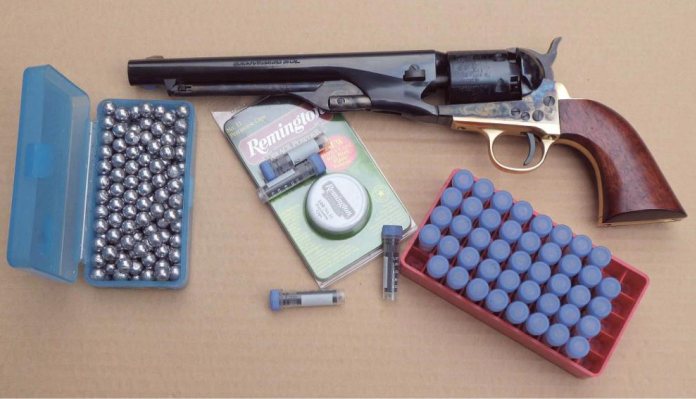 Considered by many of today’s Colt devotees to be the most attractive of the Colt ‘open top’ percussion revolvers, the 1861 Navy model was never as popular in its day as the model which preceded it 10 years earlier. The name ‘Navy’, as applied to this revolver, has nothing to do with the engraved cylinder scene, which shows a number of sailing ships. It is more a reference to the .36 calibre of the pistol. This was the size, for whatever reason, preferred by the Navy and a number of manufacturers used the same description for their .36 calibre weapons. Their .44 calibre handguns were often referred to as the Army calibre. The fact that the same naval scene is to be found on Colt’s 1860 Holster Pistol, the 1860 Army to you and me, shows that is not related to the smaller pistol’s name.

The scene, which first appeared on the earlier 1851 Navy revolver, commemorates a battle between the navy of Texas and a Mexican fleet. The action took place off the Yucatan coast on 16th May 1843 and the Texas Navy was under the command of Commodore Edward Moore, a personal friend of Sam Colt. The Texans defeated the Mexicans but there were heavy losses on both sides; It is said that the scene on the pistols was a tribute to Moore from his friend Colt.

The scenes are not engraved directly on to the cylinders but are rolled on under pressure. A steel plate is engraved with the scene and any wording and then a relief plate is made with the design raised and reversed. The cylinder is subsequently rolled over this plate, to imprint the design the correct way around.

Using the frame, cylinder and grip straps from the 1851 Model, the 1861 Navy is fitted with a round barrel, five eighths of an inch longer than its predecessor’s octagonal version – and a new loading lever, based on the previous year’s 1860 Army revolver. This new ‘creeping rammer’, first been seen some years earlier on a variation of the Colt 1855 Sidehammer or Roots pistol, uses only one screw in its construction, rather than the two of the earlier model. Produced alongside its older brother, the 1861 Model never achieved the popularity of the 1851, with less than forty thousand examples being produced during its 13 year life span. The 1851 had achieved this figure in its first five years and went on to pass the two hundred and 15,000 mark by the time percussion production ceased in 1873. The Navy models were six-shot, single action pistols and this was the last of the large frame, open top percussion revolvers produced by the company, before Sam Colt’s untimely death in 1862.

Pietta produce by far the largest variety of reproduction revolvers on the market today. Their latest catalogue shows over a dozen different models, with a wide choice of finishes. There are well over 100 pistols shown, the major exceptions being the Colt Walker and Dragoon models. For fans of the Colt Paterson revolver, this model is again listed, so perhaps we shall see it in the near future.

The pistol we have here is a basic version of the 1861 Navy, with a black barrel and cylinder, while the frame, loading lever and hammer are case coloured. This particular example shows a preference for blues in the latter areas, giving the gun an overall dark appearance. The trigger guard and backstrap are polished brass and the walnut grips are oiled. The profile of the grips is good with less of the swept back ‘tail’, often seen at the heel on some of the reproductions. Metal to metal fit is very good but the grips are a shade oversized in a couple of areas, something that could easily be addressed if it bothered you.

This particular gun is cut to take the optional stock attachment to turn it into a carbine. There are cut-outs on either side of the recoil shield, a fourth screw on each side of the frame and a notch cut into the base of the butt strap. Henry Krank have the shoulder stock listed on their web site.

Sights are what we have come to expect from these early Colt percussion revolvers, with the rear being a ‘v’ notch cut into the top face of the hammer, coming into play when the hammer is cocked. Front sight is a brass tapered blade, soldered into the barrel, in the same style as the 1860 Army. It’s not a precision set-up but adequate for the job in hand. There is the bare minimum of hatching on the hammer spur but still enough to prevent the hammer from slipping off the thumb as it is cocked.

The face of the hammer has a cut-out, which forms part of the safety device on this type of revolver. This cut-out fits over one of the pins located between each nipple recess when the hammer is at rest, effectively locking the cylinder in a safe position, whereby the loaded pistol will not discharge if accidentally dropped.

The loading lever is retained in place by a ‘catch and latch’ arrangement, with the catch being dovetailed into the bottom of the barrel and the spring-loaded latch fitted to the end of the lever. The spring is fairly strong and the mating of the two pieces is very precise, ensuring that this lever will not come loose under recoil.

All in all, this is a very nice copy of the 1861 ‘New Model Belt Pistol’, as it was officially known back in the day.

Not just a pretty face

I have a little experience with this model revolver, as I owned one from the ‘other’ large Italian manufacturer for several years. Regardless of how it looks, if a gun does not perform well, then it is no more than a rather ornate club. Fortunately, the Pietta does exactly what it is intended to do, and without much of a fuss.

Unless you have very large hands, the first thing you notice is how comfortable this pistol is to hold, and it is not surprising that the Colt Single Action Army revolver, which found favour with the US Cavalry for two decades, used the same grip as these Navy models. The hammer cocks very easily with the thumb of your shooting hand and the trigger breaks cleanly, at a shade under five-pounds on this example. With the hammer down, there is a little cylinder movement both laterally and fore and aft, but at full cock it locks up tight as a drum.

My charge of preference for this calibre is 20-grains of black powder, in this case Henry Krank’s fine, topped off with a lubricating disc made from beeswax and old candles, behind a .372 round lead ball. The pistol will take a little more powder, but this load does just fine at 25-yards and will perform well out to 50-yards if you do your bit. As with most of these Italian replicas, the nipples on this model were happy with Remington number 11 percussion caps.

If the cap fits…

There is a generous loading cut-out in the barrel lug that makes seating the balls very easy and the loading lever is long enough to give the desired pressure to ram the ball home with little effort. The cut-out in the right recoil shield is large enough to seat caps fairly easily by hand (again, larger hands may find a problem here) aided by a groove to help guide the cap in. I must admit to using a capping tool out of convenience and have an excellent model made some years ago by Trevor Deary. Unfortunately, Trevor ceased making these but if he’s reading this, it’s still the best capper I have ever used.

I managed 30 shots before I felt a little bit of resistance from the black powder fouling but it’s only a couple of minutes to tap out the wedge and clean the offending areas – cylinder arbour and its hole in the cylinder, face of the cylinder and the forcing cone area, then reassemble, adding a little grease to the cylinder arbour. I did not have one example of the dreaded ‘cap in the hammer channel’, sometimes experienced with these open top revolvers.

In 1997, many shooters, who had hitherto used single action breech loaders, cited the chore of cleaning black powder revolvers as one reason not to continue handgun shooting. Yes, it does take a little longer, but a thorough clean-up takes no more than thirty minutes, using nothing more than hot soapy water and your standard brushes, mops etc. Just make sure you get every bit of residue off the metal and apply a light coat of oil to the surfaces before putting the gun back in the safe.

It was good to get to grips with black powder again and if I were in the market for a muzzle loading revolver I think the 1861 Navy would be high on my list.