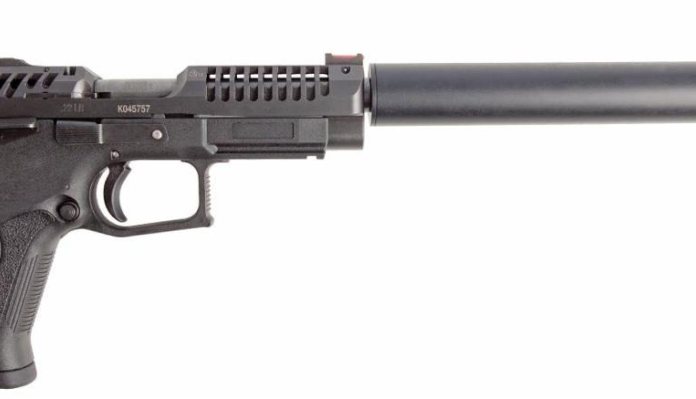 Let’s take a look at UK, Long Barreled Pistols (LBPs) so, what’s out there? Well, there is a small but decent range of offerings, including the Buckmark and Volquartsen, both of which are not entirely off-the-shelf and in the latter case expensive. However, for the sake of this review, I am only addressing the two most popular models available by far; the GSG 1911 via Edgar Brothers, and the Grand Power K22 via Caledonian Classic Arms. This is not a gun test, just a brief look at these two options. As I have said before, if you fancy a bit of Practical-style shooting, then put in a variation for an LBP and go and have a look at both models, you will not be disappointed! Be warned, it’s addictive; so, you’ll soon be thinking about spare magazines, holsters and all sorts of go-faster bits!

If the numbers are familiar, they should be, as Colt’s 1911 and later 1911A1 (a slightly improved version) is probably the most iconic and longlived handgun of the 20th century. However, this copy is built by German Sporting Guns (GSG), who have been very successful in recent years with other .22LR (Long Rifle) firearms reproductions: HK MP5, AK47, MP40 SMG and StG44 assault rifle. It’s a fullsized and highly detailed replica, made in the main from zinc alloy, with areas like the barrel and some of the mechanism from steel. It feels right and to a greater degree handles and strips almost like the real thing!

One of GSG’s strengths has been ‘feeding the UK market’ with different models of 1911 via distributors Edgar Brothers Ltd. These can be as simple as varying in color, different furniture, and sight solutions. One even offers a complete, bridge-mounted red dot sight and Picatinny rail for torches or lasers. The price is reasonable, and the warranty offered by GSG is second to none!

All factory replacement parts are available from Edgar Bros, and via their distributors. There is a growing market of ‘upgrades’, spares and equipment too. This has really built over the last 3-4years, as the popularity of GSG1911 has gained momentum, offering such delights as accurising kits, magazine buffers, bushings, red dot slide mounts, etc. You name it; it’s out there, except for decent iron sight? It’s a specific Novak cut, so authentic 1911 irons won’t fit, and I have to say that the sights fitted are a little bit disappointing, though workable!

Developed and built by Grand Power in Slovakia as a training piece to complement their service model. It has the looks and feel of the Beretta 92F, crossed with the CZ75 and uses a combined build with a polymer lower (grip frame) and a steel slide and barrel. This last component is fixed to the grip frame.

Well built, you can just feel the quality in your hand – no rattles, not too heavy and well balanced. There are three main models, which are variations on a theme, built to serve specific demands. The Standard, the X-TRIM, (with lightened slide), and the Race model, with vestigial slide, as such a ready to go competition version. There’s also the Whisper, which is fully moderated and made to shoot sub-sonics. Trouble is, it’s quiet, so will not start a shot timer, so no good for competition shooting.

All models come as standard with basic ’iron sights’, with a fibre optic front and an adjustable U-notch at the back. They are good quality and work, as you would expect. Also available from Caledonian, is the option of a slide-mounted red dot if that’s your thing! Certainly, this is the direction competition is moving, as it suits ‘both eyes’ open shooting and fast acquisition for quick target rounds.

Controls are ambidextrous everything! This is a great feature for left and right handed shooters, and also for when shooting competitively. There are usually both ‘strong’ and ‘weak’ hand elements, so makes life much easier. Caledonian offers a comprehensive warranty with each firearm. This is a double action (D/A) mechanism, so you can start cocked and locked (safety on) for a single action (S/A) draw, or D/A hammer down and trigger cocking the first shot. Both have their points. A good range of accessories is available from Caledonian, including extended magazines, replacement parts etc. Thanks to Craig from Three Stags Shooting Association for providing and handling, his K22 for this review.

Edgar Brothers and Caledonian Classic Arms should both be very proud. Their belief and confidence to introduce and promote LBPs to the UK market has reinvigorated the pistol shooting discipline over the last 4-5 years. The reputation of both suppliers is well-founded, reflecting their excellent customer service and back up via their respective product warranties. Both of their offerings are excellent, so it’s really down to shooter preference, and what do you want it to do?

The GSG1911 is available at all good gun shops, so give Edgar Brothers a bell, so that they can tell you where your nearest dealer is. The K22 can be bought directly from Caledonian Classic Arms, as well as gun shops.

For: D/A and S/A operation, ambidextrous controls
Against: Pricy by comparison
Verdict: Well-presented and featured