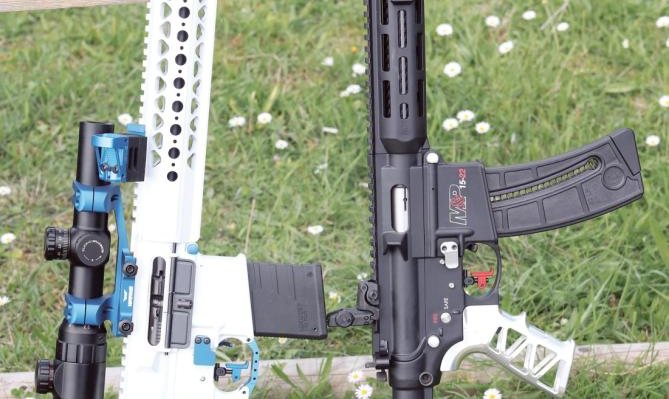 In general, I’m the sort of guy that likes to keep things simple; so, in the main its quality factory rifles with good synthetic stocks, with extra money spent on the best optics and practical accessories for my hunting needs. Bolt-on goodies are all very well, but in truth not all really live up to expectations, so: keep it simple and practical is usually my advice!

But, the ability to easily dress up your baby for pure curb appeal, a specific task or both, is equally appealing and potentially useful. And no one rifle exemplifies this ethos better than the generic AR15! A fact reflected by the after-market industry, as it offers literally hundreds of bits and pieces to satisfy the ever-growing demand. I run a Smith & Wesson Military & Police 15/22 .22 long rifle semi-auto, as many of us do. Mine is slightly tricked out and painted, with ambidextrous safety, drop-in trigger kit, lockable telescopic butt, over-sized/improved rubber pistol grip and rail covers. The whole thing, including A-TEC moddy has been Cerakoted in Desert Tan with black highlights and to me it looks good and handles better than the original.

So, with this in mind, I was planning a customising feature on 22 ARs, when I got a call from Richard Vowels (Gunfellas) asking if I would like to look at two of his special creations; well dah! To say these two had been customised to within an inch of their lives would be no exaggeration, and to my more Spartan eyes, they were not only over the top, but also around the corner. It then occurred to me that they were physical essays for what is possible in terms of cosmetic and practical changes and improvements. I say now, I do not like everything that has been done, but I do like why; so, without further ado, prepare to be blown away!

The blank canvases for this rimfire makeover are a standard, 16-inch, new model, MOE Mk 1, Smith & Wesson M&P 15/22 and a 16.5-inch KRISS Defiance DMK22C-LVOA with the fulllength forend. I have tested both out of the box and reckon they represent two reliable and shootable rifles. Externally, apart from the hideous, white paint job on the KRISS, it’s the Smith that has been properly topped and tailed, so let’s start there.

The M-Lok forend remains but the standard barrel has been chopped to 12-inch, re-crowned and threaded ½ x 28 UNEF for a moddy or brake. But in this case Richard fitted a full-length carbon fibre barrel shroud. At first, I thought it a full-length moderator and that the barrel was drilled, this was not the case and it does nothing apart from looking good, which annoyingly it does! A small hand stop is fitted, which for a shorty like this is sensible, as fingers can easily get too near the muzzle. The standard A2 pistol grip has been replaced by an aluminium Roah version, essentially a larger A2 but with the sides cut out and an in-fill back strap. Hideous in the white, but it offers excellent hold and control; damn it!

Most radical, the telescopic butt has gone, to be replaced with an alloy, skeleton strut-type. It looks minimalistic and drops the shoulder pad well below the line of the buffer tube. It’s length-adjustable but only by clamping screws, but then again it only needs setting up once and the head position is superb. I was beginning to see a pattern forming here! Cosmetically that was it, but there’s more.

Standard AR triggers are usually firm and it’s common to replace them with a drop-in unit, no difference here with a Timney Calvin Elite breaking at a crisp and light 1.5lb; you spoil us! This uses anti-walk pins, again a sensible addition. Perhaps a bit OTT for this little chopper is their trigger shoe kit that consists of a length of pull (LOP) adjustable post blade with a rotary finger pad for that perfect firing pinkie position. What did surprise me, was the Elftmann ambidextrous speed safety, instead of the familiar rotary lever. This simple cross-bolt conversion is very slick indeed and better than the original throw lever, which I have always thought good. It pushes right to left to FIRE and reverses for SAFE. There’s a Timber Creak mag release, which is a simple drop back extension plate, I have the Odin version on my Speedmaster and it improves things a tad. And the T-handle has an extended unlocking lever on the left.

The receiver halves now have extended take-down pins, which is nice but not essential, but the biggest bolt-on is the Magpul BAD Lever or Battery Assist Device. This consists of an L-shaped control that pins to the standard bolt release/ manual hold open catch on the upper left of the receiver and offers a larger thumb pad. It then drops down and goes through the front of the trigger guard to be easily operated by the trigger finger. In use, it offers two functions: 1) a quick way of closing the bolt using the firing hand and 2) the same to hold the action open. It works but then again so does the standard bolt release; probably one for the speed freaks! Richard retains the MBUS (Magpul Back-Up Sight) fold-down iron (plastic) adjustable sights that come as standard with the Smith, always good. He also added the SHIELD SIS red dot.

Externally, the KRISS is the same long-nosed LOVA model with the exception of the Timber Creek pistol grip, which is similar to the Roah on the Smith and a bowed Tactical Galaxy trigger guard. It also wears one of their ambidextrous/extended T-handles too, they have their uses! The barrel is now finished with a rather fanciful stainless Breacher muzzle break that will appeal to the pointless bling brigade no doubt. The ambi safety is a lever-type from Timber Creek that can be set at 45 or 90°, I found the levers a bit small for easy operation. Again, a Timney Calvin Elite trigger at 1.5lb with the trigger shoe kit and anti-walk pins, BAD Lever and Tactical Galaxy’s extended mag button, take-down pins and buffer tube. No iron sights on this one; instead, a Warne reach-forward/back 30mm scope mount with an EBER 1.5-5x20 optic and beloved of action shooters a Warne 45° base with a SHIELD RMS red dot fitted. This offsets the dot, so you can flip the gun on its side and come off the scope and on to the dot fast for up close and personal targets; it’s a good idea for competition shooting.

Richard finished the KRISS in white with electric blue highlights on the scope mounts, T-handle, pistol grip, trigger guard, forward Picatinny base and controls. It would not look out of place in a Star Wars film. This was the intention, to get it away from the black rifle stigma and also catch the eye, which it does in spades. I hate the look, but totally agree with what it’s trying to do and certainly achieving.

To quote the film The Dirty Dozen: “There’re pretty, but can they fight?” Well, the answer to that is a definite yes! After a bit of testing with several makes of 22 Long Rifle ammo, I finally settled for Eley’s Contact that runs a 42-grain round nose bullet at 1090fps, as it suited these two rifles with their very different barrel lengths. For accuracy testing, I fitted my old Leupold VX-2 3-9x50 in a one-piece Sportsmatch mount.

The 12-inch Smith was a dream to handle; short, light and very handy, it came up fast, giving instinctive shoulder positioning, sight alignment and superb pointability. I am sorely temped getting my own 15/22 cut down to 12-inch too.

The KRISS is a larger and heavier rifle, part of this is the fact that it has full metal upper and lower receiver groups compared to the all-polymer of the Smith. Also, this was the first time I had used the long-nosed LOVA version, which does put a lot of weight up front, for no really good reason. This shrouded build however, seems to have become very popular, but it’s not for me. The 1.5- 5x20 scope would seem to suit any 22 AR and the off-set red dot mounting is really useful.

Out of interest, I choreographed the Contact in both rifles with some interesting results. It’s always said that there’s little difference in velocity between a 12-inch Barrel and anything longer in terms of ballistics. But I also wondered about drop and general accuracy.

Most interesting was that there was only a 51fps difference between the two rifles with the Smith showing a much tighter extreme spread. Plus, its lower speed still exceeded the Eley quote by 9fps; not bad. Accuracy was identical and at 100m I was getting rounds consistently inside 1-inch too. The only real nod the ammo gave to barrel length was the KRISS required 3 Mil-Dots of elevation and the Smith 3.5 at that longer distance.

I started this test thinking I had two tricked up pretenders that were merely exercises in dressing up two good rifles for no more good reason other than cosmetics. Not all the accessories are to my taste, as I would not bother with a bad Lever, barrel shroud or a fancy muzzle brake on a 22 rimfire for example. However, there are plenty of people who would and good luck to them, as if it makes you feel good then it might just make you perform better. However, others like the drop-in Timney triggers (though not cheap) do the business, as did that Elftmann cross-bolt safety and some extended and ambidextrous controls too. I think the only thing Richard did not fit was an ambi magazine release, which again is something I feel has little value.

At the end of the day, I really enjoyed my time with these two rather special rifles and it certainly opened my eyes to what is possible. Shop around, as there’re a lot of AR goodies available and many not expensive, for example the Timney is one of the best triggers, but there are plenty more that will improve a standard mechanism for considerably less and be a better investment given the sort of shooting you are doing. Plus, if you have the rifle, then that’s a chunk of money you don’t have to spend again, and optical choice is down to you. My thanks to Richard Vowles of Gunfellas; it was an eye opener, mate, cheers!