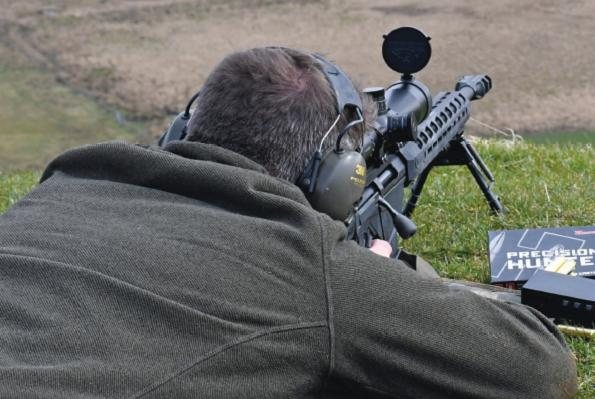 This Ruger Precision Rifle (RPR) was a big unit to lift out of its box as it weighs just under 8kg. This then increases to 9kg once a suitable scope and bipod are fitted!

One of the first things I noticed was the ‘Magnum Muzzle Brake’, which is tuneable through rotation on the 3/4x24 thread to modify the muzzle reaction from recoil. It’s a laterally ported unit with twin vents left and right, directing blast almost perpendicular to the bore axis. It’s locked in position with Allen screws and a rear nut. A moderator could easily be added if that’s your long-term preference.

The barrel is cold hammer forged with 5R rifling, intended to offer gentle jacket handling. The 1 in 8.375” twist rate stabilises long bullets up to 300-grain. Its 23mm muzzle diameter tapers up towards the action along its 26” length. Minimum bore and groove dimensions, headspace and centralized chamber are advertised within the 4140 Chrome-Moly steel as further assurances of precision. The surrounding free-floating forend is octagonal and measures 58 x 52 x 480mm (WxHxL). It shows masses of M-LOK and a fulllength RRS spec 38mm dovetail underneath.

The 4140-steel upper and 7075 aluminium lower are colour matched with the latter’s Type III, black hard-coat anodized finish offering a tough surface. The bolt is the same chrome-moly steel to minimize distortion.

Ruger’s Marksman Adjustable Trigger offers a weight range of 1000 to 2200-grams (2.25 to 5 lbs). It’s a familiar design, breaking in a single-stage after take-up of the initial movement on the inner safety blade. Mine broke at a consistent 830 (+/- 20-grams) with a 98% crisp feel. The AR-style grip gave a 60mm reach to the blade and there is a 2-position ambidextrous safety selector located just above it.

A 30 MOA Picatinny rail is supplied, which is appropriate to the chambering, for serious 1-Mile capability. Ruger runs the bolt’s shrouded rear end within the buffer tube to maintain a low profile to the rifle without a taller, top-heavy layout, in what I describe as a superior ‘monocoque’construction, rather than a simple ‘chassis’ rifle.

The lower sites the mag well and release catch in front of the trigger guard. A barricade support is present if required, although this seems more of a heavy, prone use rifle to me. Two detachable steel magazines with a 5-round capacity are supplied and they present the rounds to the threelug, 70° lift, 25mm diameter nitrided bolt with right-side extractor claw and sprung plunger performing flawlessly, without undue brass or bullet damage on feeding. A tubular aluminium follower/shroud stores trigger adjustment tools on a bolt with a 290mm overall length and 70mm handle showing matt black teardrop tip. The forward bolt shaft, although cylindrical, shows complex facetted underside machining to ease congestion with rounds located in the magazine. These are factors that are unfairly ignored when saying the RPR looks externally, a bit mechanical.

The unobserved details become a key factor in the excellent handling personality of the rifle.

All stock adjustments are controlled by toggling levers and opposing nuts to set absolute tension. RPRs fold for bolt removal, which also helps get this 48” long rifle into a gun case or cabinet. Length of pull (LOP) shows extensive adjustment from 13-17”. The cheekpiece has linear and vertical travel, plus the stock hinge is secured with a strong, sprung detent and can be locked folded. I liked the bolt release catch on the left side, which remains unobscured by the folded back end. The interconnected nature adds to triangulated security and flexfree stability once locked down.

Getting the most out of the ammo

Edgar Brothers supplied some Hornady ammunition, which consisted of some 285-grain ELD-Match and 270-grain ELD-X. Unusually, both exceeded their advertised velocity figures, perhaps testament to the 5R rifling pattern! The limited quantities meant a very focussed review project, so with zeroing at 100m immediately showing sub MOA performance, and the turrets zeroed, I was straight off to the 1000m firing point. Overcast skies, 10°C air temp and wind speeds below 3 metres per second were not going to be wasted! I had a huge quarry backstop to spot splash, so with the previous 10 MRAD elevation DOPE dialled in, with spin drift pretty much offset by wind direction, the first round required an elevation reduction of 0.6 MRAD. The difference between the two ammo types was around 0.4 MRAD, with the slightly higher speed making up for the lower ballistic coefficient on the ELD-X when compared to ‘M’ bullets.

Lateral wind shift and vertical bumps saw me leave the scope on 9.5 MRAD and I used the reticle to aim off/compensate for the constantly changing conditions. Here is where long range rifles get really interesting to me, as you have to shoot quite quickly to make up for wind changes with regular corrections.

Being able to keep your head planted on the cheekpiece behind the optic during recoil is critical to seeing bullet trace. It takes only a tiny change in the wind to drift it tantalisingly close to the edge of a steel gong and here is where the Ruger most impressed me. The recoil was extremely well controlled through physical mass and the directional brake’s tuned position to eliminate muzzle jump. I could retain the sight picture whilst cycling the bolt and scope alignment remained unaffected as I waited for the bullet to land. It takes 1.7 seconds to fly 1000m and the wait for the ‘clang’ to come back is even longer. Being able to reload and compensate almost instantly when a strike is observed is addictive. The next bullet is in flight less than 2 seconds after the sound of the previous one returns. This significantly eased coping with 3-dimensional wind changes, where the previous shot is always the best wind indicator.

Large .338 bullets show more ‘trace’ as they disturb the air in flight, making spotting a little easier for those observing, while the recoil pulse of the rifle obscures it for the shooter a little, hence why minimal magnification and a generous eye box is helpful to maintain the sight picture during this split second. I found the Ruger better for this than many other .338s because of the recoil control and physical comfort.

I took some shots prone over gravel surfaces to assess blast pattern, and no debris was scattered in my direction or under the muzzle. Physical recoil was more a push than a hit and the rifle tracked far straighter than many others, with reloading/bolt manipulation hardly affecting the aiming position.

For me, the way the gun shot, the handling, not just groups on paper are what impressed me and I enjoyed shooting it. Many .338s can be a physically mind-numbing concussive hassle, where 40 rounds would have been far more than I would have liked, never mind too few as with the Ruger.

The RPR didn’t always appeal to me when it first appearing six or so years ago, but it has grown on me ever since, standing the test of time and inspiring copies that just didn’t get it quite right in comparison. It’s not perfect, the stock’s back end is angular and not the most comfortable on your knuckles for an underside supporting hand, but it’s fair to say a monopod could be mounted if needed. I would personally add a hand stop/butt hook just to help this matter. Once set up for me with a 14.5” LOP, it was comfortable and secure in the shoulder. The ribbed, firm, radiused edged recoil pad measuring 120x35mm (HxW).

The distance from the recoil pad to the bipod’s feet measured 38”, aiding stability. Loading the bipod was reassuringly solid without any loose joints in the stock clicking as pressure was applied.

The .338 RPR really seems to fit its own skin in this largest calibre variant and it was a rifle I thoroughly enjoyed shooting. Smooth recoil transit, minimal brake disturbance and stable bolt operation remain lodged in my memory. It’s a rifle with delightful manners given its plentiful energy and range capabilities that become more easily accessible than some peers.