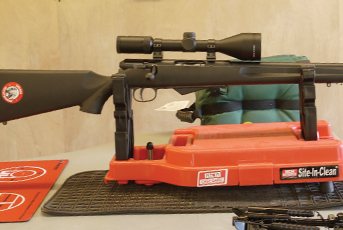 In the last two decades we have seen many new calibres appear. All originating from America, quite the most unusual to we Brits have been the .17”s. Though many 17 centrefires exist for us it started with the 17 Remington, based on a necked-down 223 Rem case it was welcomed as the ultimate fox/varmint cartridge. However, use saw it was wind and cleaning sensitive and it soon fell from favour and to a degree put us off the .17. Later the .17 Remington Fireball (221” Fireball-based) came and went with little interest.

Next the round that changed it all - the 17 HMR (Hornady Magnum Rimfire)! Based on a necked-down 22 Magnum (22 WMR) it fired a .17” calibre, 17-grain V-MAX bullet at 2500 fps. The initial reaction was – what the hell, but it proved itself to become today probably the most popular and useful rimfire since the 22 Long Rifle.

Hornady then went on to offer the MACH 2 (HM2), which was essentially a shortened HMR based on the 22 Stinger case. Firing the same 17-grain V-MAX bullet but at 2050 fps – hence the name it too came and went with few converts. So the rumours of a new, 17 Centrefire from Hornady in 2011 were greated with scepticism here in the UK.

THE NEW HORNET
In truth most new calibres are based on old cartridges and Hornady’s 17 Hornet is no exception. Using that classic smallbore the 22 Hornet as its inspiration Hornady necked it down to .17”. In itself not a new idea as PO Ackley designed his 17 Ackley Hornet in the 1950s.

The original 22 Hornet uses a semibottlenecked case, which head spaces on the rim. This build has always been debated as the original has a reputation for variable performance depending on the make of rifle and ammo used.

Hornady’s re-think now shows a proper shoulder, which should give more reliable head spacing and hopefully consistency. However, they have still retained the rim, which makes economic sense as the case conversion was doubtless simpler. But I wonder if a rimless head might have been better?

Hornady will be offering two loads – first and currently available a 20-grain V-MAX using their Superformance powder with a quoted 3650 fps/592 ft/lbs from a 24” barrel, with a 25-grain hollow point and V-MAX to follow. We are also told the 17 Hornet is light in recoil and shows a similar trajectory to a 55-grain 223 Rem out to 300 yards, which seems to be its maximum effective range too. Where it will fit in remains to be seen, but in the UK I can see it as a crow gun and maybe for foxes; maybe! More powerful than the 17HMR, it is more expensive too at just over £1 a pop (25-round box) but is reloadable, which makes it attractive.

LAUNCH PLATFORM
So a new cartridge, but what about the rifle? Well typically Hornady have collaborated with a major manufacturer as they do; much like they did with Ruger (204, 338 RCM and 375 Ruger) and Marlin (450 Marlin). This time it’s Savage with their neat little Model 25. Edgar Brothers who import both brands organised a road show to showcase both the ammo and the rifle. I attended the first one organised by Riflecraft Ltd. Here the public could turn up and get the chance to shoot the 17 Hornet and talk to the experts about it too.

I was unsure about what to expect and thought the Model 25 would be some form of rimfire build, but Savage have combined this and both centre fire looks and feel into a surprisingly handy design. The layout is simplistic with a tubular receiver with a simple, 2-way safety. There’s a proper 3-lug bolt and though no Accustock, they have fitted their Accutrigger, which makes a difference. Feed is from a polymer, 4-shot, detachable box mag and 1” Weaver bases are fitted as standard.

Savage offer three versions: Walking Varminter – 22” barrel and black synthetic stock, weight 6.9 lbs, then two Lightweight Varminters, both with 24” barrels and a choice of standard or thumb hole brown laminate stocks. These weigh 7.2lbs each and the twist rate is 1-9” for all models. For the show Edgars fitted the new Weaver Kaspar variable scopes and a dedicated, .17” version of the new Hardy Gen IV moderator brought in by Riflecraft. Rifles can be bought as a package with scope and moddy or on their own. Ballpark for the Walking Hunter less accessories is around £700. Ammo well round about £1 a pop and it comes in 25-round boxes.

QUIET
The 17 Hornet is quiet, as was demonstrated! With the Gen IV fitted it was shot alongside a 17HMR and it’s not that much louder at the muzzle. Though any high velocity round is still noisy down range! Feed and function were OK and my general feeling, calibre aside, was this is a lot more than meets the eye!

Many people took up the offer to try, the majority were sport hunters and talking to them indicated they’d shot foxes and vermin but the 17 Hornet was an unknown that had possible potential for what they do. The general view seemed to be positive, with most liking the lightweight and easy handling of the Model 25. Equally they liked the ballistics. Some even had a 17 Hornet slot on their tickets.

However, I was also talking to some professional keepers and their views were a little different. Most use 17HMRs a lot and shoot foxes and longer range vermin with 22 centrefires etc., which also do double duty for small deer too. Their view was they doubted the ability of the Hornet on foxes at longer ranges; certainly on body shots and thought the calibre a bit too dedicated for what they do. Plus there were concerns on how it would be affected by wind, which for any 17 is a big consideration!

However, in both cases and views only real time results will prove or disprove the ability of the 17 Hornet. On that point I already have the ammo and the rifle is imminent, I asked for the laminate thumbhole Lightweight Varminter as I prefer the heavier wood stock to the rather skinny plastic Walking version. I would say however I like the feel and handling of the Model 25 and know that Savage also offer it in 22 Hornet, 204 Ruger, 222 and 223 Rem too and I’d like to try it in some of those too. Whatever, speaking to John from Edgars showed that the first batch of rifles have all been pre-sold and a second order has already been placed and will be arriving soon. Regardless of its actual field ability the 17 Hornet has caused quite a stir amongst British shooters; we shall see…