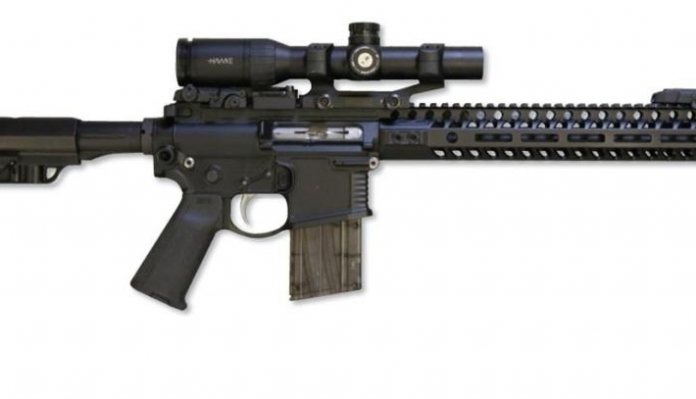 I was speaking to Will Westlake (Barton GunWorks) recently and he said to me: “You like AR15s don’t you, as I might have something that would interest you the next time we meet?” Well, the next time arrived, and he pulled out this rather slick looking 22 AR called the A2 Armament Aethon. Visually, it’s your generic M4/ CAR15-type with a 16.5” barrel, telescopic butt and a free-float forend. With flat-top receiver, fold-down iron sights, it seemed nothing radical, but well presented.

Picking it up, I assumed it was made from polymer, as it was light; which, as I discovered, is 2A’s thing, as this little baby weighed just 3lb 3oz. Given my S&W M&P 15/22 weighs 5.5 lbs and I thought that was ‘not heavy’, no wonder my mistake about the material, as it was all-aluminium, just beautifully machined from 7075-T6 billet alloy; to within an inch of its life!

A2 make centrefire ARs too and describe their system as a MULTI, pretty much meaning one basic lower that can accept centrefire or rimfire uppers or conversion kits. The finish on all components is hard coat, type-III anodised. The deep, 16.5”, four-flute barrel is interesting, as it’s a two part build, with a 7075-T6 billet aluminium outer, and a rifled 4140 steel, 1-16” twist liner. The muzzle is threaded 1/2x28 UNEF with protector.

Guns are built in house, with the 12” M-Lok forend from A2 along with magazine catch, through- drilled titanium takedown pins, buffer tube and latch plate. Sensibly, they buy in other ready-made components too; the charging T-handle is a BCM-mod4, the furniture a Magpul MIAD pistol grip and Mission First, minimalist L-shaped butt. ALG Defence supply the trigger group with their ACT (Advanced Combat Trigger) that includes optional light and heavy hammer springs.

The 22LR BOLT is grade 5, 6AL-4V Titanium, with stainless steel barrel collar and high-quality polymer buffer. Feed is from what looks to be a Black Dog, 15-round magazine. The upper receiver has no forward assist or ejection port cover, but a case deflector.

Along with the rifle there was some of the new Hornady 40-grain, sub-sonic round nose ammo. I did not have a lot of time and managed to shoot about 250-rounds, without one malfunction, not that rare for a quality 22 AR but very pleasing. The action was fast and slick, although typically there’s no automatic last round hold open; instead, the bolt gets blocked by the rising mag follower.

The trigger was very good and accuracy impressive, as was reliability. With a Hawke Frontier 1-6x24 on top I was easily hitting 1” bits of broken clay pigeon at 100m. This is a really well put together and functional 22 AR no question! A2 offer two similar versions; the Aethon and Balios-Lite, Edgars told me that the latter is probably the one they will import. Price-wise, A2 are quoting $1399, so we can assume the thick end of £2K English. A lot of money yes, but it’s a peach of a rifle!