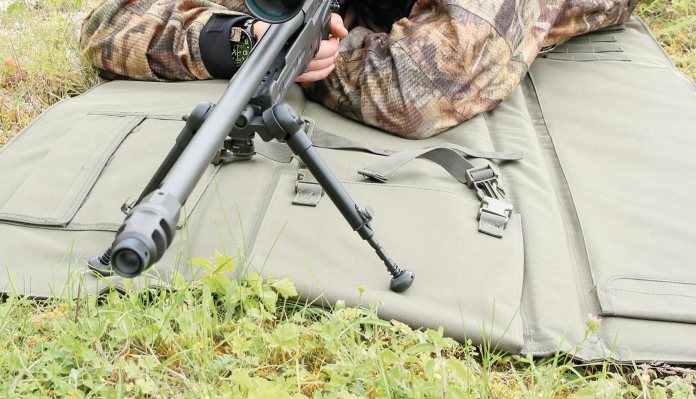 Coming from impeccable target shooting roots, their real claim to fame is a series of sniper rifles. The original L96 A1 was introduced in 1982, then the AW (Arctic Warfare) variant in 1988, pretty much the same thing, but with some modifications for cold weather use that did not detract from temperate operation. It seems every time there’s a sniper trial for a new rifle for the British services, the AI gun always wins!

Most significant and distinctive was the Accuracy International Chassis System (AICS) thumbhole stock system they used. With an alloy spine, complete with magazine well that the barrelled action was bolted too, its polymer, over build furniture included an adjustable comb and LOP, plus the option of folding or fixed butts. So popular was the AICS that AI built them to fit rifles like the Remington 700, so assuring their success in the sporting market. I recall Riflecraft Ltd. using it for their TMR3 (Tactical Marksman’s Rifle).

The AW also proved popular with sports shooters too, looking for a long-range rifle, so much so that at one stage AI made a slightly cheaper variant called the AE, which doubtless sold as a sniper gun too. Both this and the AW are no longer in production, now being replaced by the AT and the more upmarket AX, the former rifle is on test here. In essence, the generic action has changed little but furniture and features, as to what they offer, have. AI says this about the AT: “The AT (Accuracy Tactical) continues the legacy of the combat-proven AW308 and takes the AW to new levels.

The standard model has a fixed stock with 24-inches, quick change, and plain barrel. There are options for colour, folding stock, barrels and suppressors and many accessories, which can be added. The AT is ideal for Law Enforcement and civilian users.” So, here I am, a civilian end-user; well, tester anyway!

I like thumbhole stocks but never really got on with the AICS version, as I found my hand a bit cramped in the firing position. The re-design for the AT is very similar but shows a normal pistol grip and a more cut away underside to the butt that offers a larger grasping hook, which I found better. You can however get an accessory that turns the AT’s grip into a thumbhole if you prefer. There are also options on colour, as you can get what AI call ‘stock sides’ in black, green and pale brown.

What I like about the AT stock is the simple approach to adjustments, with the comb being locked by Allen screws and the LOP adjusted by removable spacers. Once you’ve set it up, there’s no need to change it! The forend is slightly less rectangular and can be fitted with accessory rails and there’s also a saddle mount over the barrel for a forward-mounted NV optic. As before, the barrel is seriously free-floated and there are lots of flush-cup sling swivel adaptors.

There’s a QD socket in the nose of the forend, so you can use AI’s spigoted bipod, which as we shall see is a practical design. Conversely, you can get a Harris K-Mod adaptor for underneath, as that has compatible slots. Equally, you can fit a monopod or spike at the rear; overall, it proved comfortable and very shootable!

To me, the barrelled action looks little different to the AW’s; well, if it ain’t broke, don’t fix it! However, there are two significant changes, as we shall see. The 20mm bolt body uses a 6-lug engagement, with a low angled and curved-back, ball-ended handle. It looks a bit odd, but in the hand, operates smoothly, with little operator fatigue. The safety is a 3-position unit on the right of the bolt shroud, with the usual forward – FIRE, middle – SAFE with bolt operation and rear – SAFE bolt locked and there’s a cocked action indicator pin that protrudes from the rear.

The steel receiver is chamfered on the top sides and now has a proper 20MOA STANAG 4694/Mil Std 1913 action rail; that’s Picatinny to you! This is much preferable to the old AW, which used a slimmer 11 or 12mm dovetail, which always struck me as a bit feeble for a sniper rifle. Trigger pull is adjustable from 1.5- to 2kg, as is the position of the blade; nice refinements that offer just that bit more finesse, which is what it’s all about!

The barrel is a medium/heavy build, offering 20-, 24- and 26-inch lengths and Cerakote finished for durability. It’s also easily removable, which opens up a host of possibilities! It comes as standard chambered for 308 Win, with a 1-12-inch twist rate. However, it occurred to me that barrels could be made for any short-action calibre using the 308 case head, like 260 Rem, 6.5x47 Lapua or 6.5 Creedmoor. I say this, as the action does not lock directly into the chamber extension but into abutments inside the receiver, so all that is required is turning the correct thread for the chase on a new chambered barrel.

Removal/replacement takes about one minute; open the action and undo the Allen screw on the right side of the action just behind the end of the receiver two to three turns (no more). Now, unscrew the barrel; AI have cut flats at the muzzle for a spanner if required and reverse the process to reinstall. Head space is not an issue, as the chamber face comes up against a physical stop when it’s fully engaged. Barrels come plain but can be ordered threaded with a 2-port brake, as did my tester.

The magazine release is a big, push-forward lever at the rear of the well and the 10-round, double column steel box free falls out. I was surprised to find there’s a last round hold open, blocking the bolt from going forward when empty. A bit archaic but then again on a sniping gun maybe not, however it’s easy to remove, as you just chamfer the rear of the platform.

Overall impressions are most favourable, though this 26-inch AT is not light at 14 lbs unscoped and the big Schmidt & Bender PMII 5-25x56 scope and mount fitted probably adds another 3lbs. Butt to muzzle it’s 46.75-inches, but then again it’s primarily a prone rifle, certainly for we sports shooters! The bipod is nice, with individual, swing-down locking legs with slotted height-adjustable inners. On the base, is a cant adjuster screw, which is most appreciated, and unlike an under forend mount, the rifle/ bore line sits lower in the bipod, so increasing stability.

For testing, I used two brands of ammo; PPU 168-grain HPBT Match, which very much replicates the Sierra Match King 308 bullet and Hornady’s Precision Hunter. This uses their 178-grain ballistic tipped ELD-X pill. Saying that, the 1-12-inches twist indicates that the AT is built more for around the 150-grain weights, in keeping with the standard 7.62 NATO ball cartridge.

Of the two loads, the lighter PPU proved more accurate, coming in at around ¾inches @ 100-metres, the Precision Hunter was shooting an average of 1-inch. Were this my rifle, then I’d go with my old reload of a 168-grain Hornady A-MAX and 44-grains of Viht N140 powder, which I reckon would be an easy ½-inch, if not better! Recoil was not an issue, with what is a 17lb rifle and I don’t think the muzzle brake was really needed. But it was easy to maintain the target under recoil.

What did impress was the ease of operation, with the bolt being smooth, feeding and ejecting 100% reliably. The AT sits almost dead in the aim, which combined with its easy bolt operation, makes for a very stable platform. I left the trigger weight where it was but moved the blade forward as much as it could go, which gave me a decent first pad position. The safety is a tad high and forward and I had to break my firing hand position to operate it, but I can live with that no problem!

Overall, very impressed and given what you are getting; good value for money. Items like the bipod and muzzle brake are optional, as the base rifle consists of the following- fixed stock, standard adjustable cheekpiece, fixed butt pad with spacers, pistol grip, flush cup sling attachment points, 20MOA STANAG 4694/ Mil Std 1913 action rail, user manual, and 1x 10-round magazine. AI’s website gives a full list of accessories. Rifles are available from two official sources; Sporting Servicers and Sportsman Gun Centre.