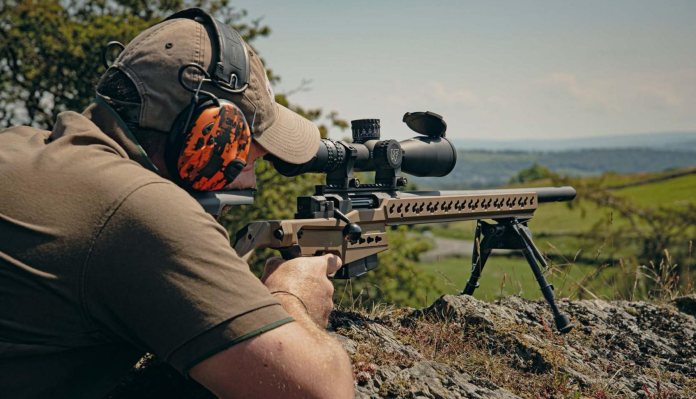 Ever since the introduction and increasing popularity of PRS shooting, it was only a matter of time before huge demand from the US market would leech into the AI mindset and they would create their own rifle to tackle the market. The AT-X first appeared in May 2021, and I was lucky to shoot one of the prototypes. It immediately pleased me, and I waited enthusiastically to get one of my own for a full review. As a brand, AI has few targets left to hit, but for PRS competition a different approach was needed for specific target use rather than military requirements.

Evolution for the next target

AI’s PRS chassis is a complex machined structure created from 7075 aluminium, skeletonised within an inch of total nudity for 100% functional requirements. First off, the forend is long and peppered with AI key slots to add the accessories and weights desired. Not only does the forend aid stability from prone, but you can tune the point of balance as well as overall weight to personal perfection and it carries a full-length ARCA rail for secure attachment to larger tripods and bipods. The back end as standard is non-folding, but a folder is likely. The action is the same as the AT and AX rifles, showing a heavy rectangular flat-bottomed design, with its barrel threaded in the front.

The steel action is fully pressure bearing, the bolt lug abutments are within it and not the barrel (as is seen on many fast change barrel rifles). The AT-X has a small 4mm locking screw on the lower right side at the front that allows the pinch to be released for barrel swaps. I found the barrel no more than hand tight in the action, with witness marks on the upper surface as well as proof marks below, but there are spanner flats nearer the muzzle if needed. The barrel’s heavy thread won’t easily self-loosen and the 4mm Allen bolt is all that’s needed to pinch it in position when it securely butts up to the thread’s shoulder. This is a simple system, and extensive use of a similar AT has shown me it is reliable.

The AT-X is significantly different from the AT and AX because it’s just screwed and not bonded into the chassis. Although I chose not to dismantle the gun, I’m aware it can be, whereas the AX/AT needs to be professionally separated and if necessary, stripped of adhesive and re-glued for perfect performance in a design created to beat warfare, not just careless civilians. Although currently available in 6.5 Creedmoor, there is no issue with having multiple barrels in appropriate chamberings for the 0.473” bolt face and short action length.

The AT-X is fitted with a competition AI-USA/XTSP match trigger with an adjustable 2-stage pull weight from 1.5-2.75 lb. The instant I used this trigger, I ordered one to put on an AT I use regularly. I felt it totally transformed the rifle. AI’s usual three-position safety catch is forward for FIRE, middle SAFE with firing pin (not just the trigger) locked and rearmost for bolt lock too.

Now re-encountering this AT-X a year later, my first impressions remain undiminished, but I have had time to repel my own enthusiasm and consider the rifle more objectively as well as experiment with alternate stock geometry. The stock adjusts with a 4mm Allen key that is clipped in place under the ambidextrous cheekpiece. The recoil pad is firm, with a central tensioning dial that allows it to move vertically and rotationally for positional preference. Length of pull is adjustable with Allen-headed socket screws on the lower right of the butt, just above the bag rider/Picatinny rail that locks securely in position to locate the recoil pad beyond the heavily skeletonised stock. This is all solid aluminium and Cerakoted in one of five colours.

The cheekpiece is very comfortable and quite broad at 44mm. It has a peaked upper surface and is laterally adjustable for perfect head alignment behind whatever optic you choose on the 20 MOA Picatinny rail. The underslung rubberised grip is very comfortable and I still prefer these, but there’s no doubt the thumb rest options will also prove desirable. The bolt handle shows a hard, black, 24mm ball and operates with a 60º lift. It is possibly my favourite of any rifle. The bolt shows 6 lugs with fluting to clear debris and snow from the locking operation. It’s a push feed face and strips rounds from the twin staggered columns of the steel magazine below. An ambidextrous release latch hangs ahead of the trigger guard and the mag drops into your hand for fast reloads. The well itself is slightly asymmetric with a deeper right wall than the left, assuming more shooters are visualising the gun from its left side, no left-handed rifle is currently offered. Bolt travel is 110mm and feels like few other rifles. It’s decidedly binary with no guesswork as to the feel or operation, plus is fast in transit and almost impossible to jam. This indicates materials, machining and coatings decidedly akin to custom rifles. The action’s flat sides and base are surrounded by the stock and there is no hint at all of anything other than perfect fit without applied stress.

Stable. The gun is very heavy, characterised by the very heavy barrel that’s cut rifled by AI. The tube shows a 25mm diameter just behind the 5/8x24 TPI muzzle thread and swells to 32mm where it enters the action. With just 175mm/17” exposed beyond the forend’s 445mm ARCA rail, it is incredibly stable when shot from a bipod, due to the long forend length. But be aware, stability is of course at the cost of manoeuvrability and for anything where you need to move arc of fire quickly, like a McQueen competition, it’s not always the perfect solution. For precision, fixed target competition, it’s incredibly solid to aim, with a hefty barricade stop/balance point in front of the magazine. I used it with and without a bipod, moderated and ‘noisy’ (with just 0.2 MRAD POI shift between) but did stay with the same scope throughout. I don’t think a max 20x scope helped me achieve the smallest groups from this rifle on paper, but the MOA standard was decimated before any ammunition experimentation or even running in. Similarly important was that the barrel and action combo just wouldn’t degenerate as it heated up and I shot in some rare hot weather when barrel cooling was hopeless. Cold bore was always on the money and 20 rounds on steel never threw a flyer. Linear recoil transfer was assured with the stock’s geometry and the heavy barrel helped to absorb a huge amount of the tiny recoil a Creedmoor generates.

Muzzle velocities were a touch above those marketed and the barrel was easy to clean, with defined cut rifle character. The machining standards were impeccable, with a truly ‘completed’ feel, without the compromise of excess bulk added around the receiver to incorporate multiple aftermarket action inlet formats. I have stated before that the heavily cut-out stock leaves space for your jaw without resonance transfer and the multi-position/accessory butt with a rail was stable when used from a soft rear bag. You can add a monopod if you want, but PRS is a little more self-support oriented. Tuning the recoil pad and height allowed further muzzle control under recoil and meant that spotting your own bullets splash was highly probable, even at close ranges.

I can see how and why this rifle fulfils the PRS design ethos and cannot doubt anything about the engineering standards. The trigger is a masterpiece with a 500-gram breaking weight and its first stage is so smooth, operating without any hesitation to the second. Bolt lift is a bit heavier than a twin lug rifle, which will always polarise opinion, but it’s a factor of physics and not substandard functionality. AI still makes a rifle that can handle tough love, and in a dynamic competition environment, where a rifle will be bumped around at speed on barricades, this is what you need. Adjustability is versatile and the Key slot allows you to control weight and balance. I’m not a PRS shooter but I have no doubts about applying this rifle to that environment and could have easily written another 1000 words about my detailed respect for this rifle and the maker.