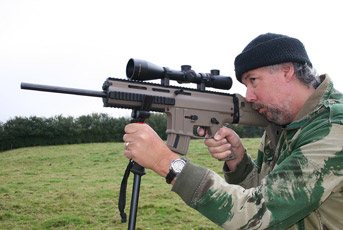 It’s no secret I have no interest in military weapons other than precision sniper rifles but then again I am more than willing to test rifles to their limit just to see how well they work.

To date nearly all the ‘military’ style rimfire rifles have had some sort of accuracy or reliability problems and so when Anschütz announced they were reincarnating an older designed ISSC rifle I was amazed - and worried at the same time. Amazed because this was Anschütz, the Kings of Precision, making a military style .22 semi-auto, but worried that if the RX 22 rifle did not perform it would reflect badly on them.

Well after 600 rounds and a month of cartridge burning I have to say if you are in the market for a military style rimfire rifle that works, is reliable, and also accurate, then this is it, the RX 22 is quite some rimfire, believe me.

Essentially this is an ISSC lower half shell with top half remodelled. The lower section is polymer and houses the ambidextrous safety catch and magazine release push button that are duplicated on both sides which regards your firing shoulder preference is handy in any stance. The typically M16 pistol grip characterises the overall military styling with the upper housing being aluminium in construction.

There are several models, the test gun being the Blackhawk desert tan finish version. This model has a full length 15.75 inch Picatinny rail on top so no problems fitting even the longest scope. The stock has an adjustable height comb, so correct eye alignment should be easily achieved.

There are also three additional 6.5 to 7.5 inch rails at 3, 6 and 9 o`clock positions for accessories such as lamps, lasers, bipod fitments. Included in the package are a set of detachable and flip up open sights. In fact these are rather good and worth a play with.
The bolt handle protrudes 1.5 inches from either the right or left side, you can attach it as you wish, I elected for the left side so if I had any jams I could work the action whilst still in the shoulder.

It’s a short quick and quite smooth pull of 2.0 inches that cocks the action then returns to battery if the magazine is removed. With an empty mag in place the bolt remains open, retained by the plastic tips of the follower surround.

The action has a steel ejector that’s sits over the mag lips when it is loaded and pings the cases rim as the bolt retracts and there is a single claw type extractor mounted to the right face of the square profiled bolt.

The barrel is the heart of the RX22 and one reason why this model shot so nicely. The Anschütz influence here has really paid dividends with a 16.5 inch precision rifled barrel being the result. The overall profile is heavy, and benefits from being 16mm diameter with a straight taper, nicely blued and crowned flat at the muzzle.

Standard magazine capacity is 10 rounds with an optional 22 round mag available. The mag`s are polymer formed with a cut away to see the capacity in situ and the feed lips are plastic/polymer.  It attaches and detaches remarkably swiftly but make sure to give it a last push into position to lock it in.

The safety is ambidextrous with a two position rotating catch; down position is fire and upward is safe indicated by coloured indicating markers.

Triggers on semis are usually horrendous but I have to say I was pleasantly surprised. It`s a single stage adjustable unit from 3.5 to 5.5 lbs, but actual pull was 4.45 lbs on the scales. There is some creep or take up but you soon get use to it and it does not hinder accuracy.

Now things get interesting, the Precision version has a fixed stock option but this Blackhawk version has a folding stock as standard. The butt section hinges its full length at the action union point. A press of the finger grooved button allows the butt to swing to the right and fold back along the action being retained by a polymer latch sited on the action body.

Further to its ability to shrink in size the RX22 has an adjustable length of pull, again a simple press in button to the left side and the stock section ratchets out in three steps, 32.75 to 34.25 inches.  As mentioned previously, you can also raise the comb/cheekpiece for correct scope eye alignment.

Recoil pad is a grooved solid rubber and a moulded in loop forms the sling attachment with the forward position being sited left and right on the top rib section.

From this type of rimfire the reliability is actually the primarily consideration; if this is ok then you can worry about the accuracy. This is usually the other way round on a bolt action rifle.

I have to say I shot over 600 rounds, I was burning up old stocks of rimfire ammo in truth and in all these rounds I only had 4 misfires, two were old Eley HV ammo and failed to ignite, the third was a light strike to a Stinger round and the last a half chambered Remington Golden bullet because it was crooked. To me that’s really excellent when you consider some other semi-automatic rimfires jam almost every magazine!

You might be thinking that being a military style semi-automatic, only HV ammo will work through the action. Well you would be wrong, as nearly all the subsonic ammunition, other than CCI CB Long (which has very reduced velocity) cycled the action perfectly. Only when the velocity dropped below 950 fps did the action fail to cycle a new round.

From the off at 30 yards then 50 yards, and as an overall long range measure at 100 yards, the RX 22 was very good. I had paper targets, water filled plastic milk bottles and Edgar Brothers Firebird targets all of which proved great fun to shoot at.

Mounted with a Nikon Monarch 2.5-10x50mm Illuminated scope zeroed in, the RX 22 shoot well and I mean really well - it is an Anschütz after all. This model loved RWS HV ammo, digesting 5 shots into 0.5 inches at 30 yards, 0.75 inch at 50 yards and 1.25 at 100 yards with a velocity of 1132 fps and a healthy 113.8 ft/lbs energy. Similarly the Eley Subs shot nearly as well with 0.95 inch groups at 50 yards with the CCI segmenting ammo at 1001 fps grouping the same and without a single misfire. It was also quite noticeable that the last shot from a string of five was always 25-40 fps lower in velocity and would sometimes produce a shot out from the group.

The RWS Subs although accurate had the lowest velocity and sometimes failed to cycle the action so below 950 fps is about the limit on this action.

The Stingers were fast and you could feel the recoil change and action cycled promptly but accuracy was so-so.

The RX22 is great fun to shoot and plinking away at tin cans and old 35mm film canisters as well as the Firebird Targets was irresistible.

Well, I have to eat my words, this is a military style rimfire that can shoot, and worthy of the Anschütz. The accuracy is not that far off some bolt actioned rifles! Combine this with the reliability factor and this RX22 action is a real contender as a lamping gun for rabbiting. Forget about the looks and think about the ability and you will find this rifle could actually be a very competent vermin gun.
With more scope, laser, and attachment options then you could actually need, and larger capacity round detachable magazines, and a scope rail suitable for scopes or NV kit you have to really think that in real terms the RX 22 is quite a unique and all-round performer.

If it was mine I would have the barrel threaded and select the CCI or Eley subs as they worked fine in this gun.

It’s priced at around £700, it is reliable, accurate and a versatile rifle, so forget about the “PC” brigade and enjoy the RX for what it does best – shooting!