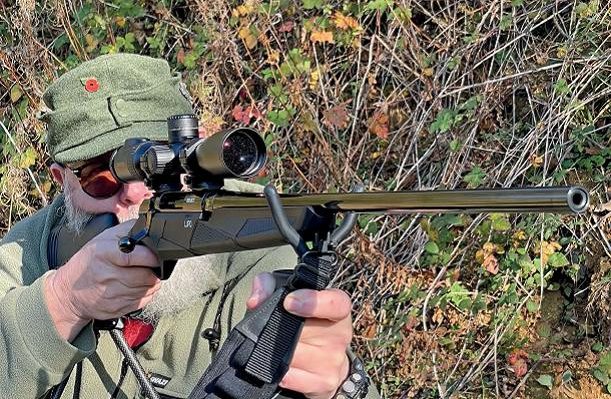 From a UK perspective, Benelli are primarily seen as manufacturers of probably the quintessential, recoiloperated, semi-auto shotgun. What people perhaps don’t know, is that they used to make motorcycles and other firearm types. I recall testing their B76, 9mm pistol in the 1980s and have used their excellent ARGO semi-auto hunting rifle on overseas driven boar shoots.

All their firearms show a pleasing sense of style, manufacturing quality and innovative design. So, the announcement of their first bolt-action hunter, the Lupo (Wolf) piqued my interest. But, in truth a turn-bolt action, is a turn bolt action, so what can you do to make it stand out? As we shall see, Benelli has brought a lot to the party.

It offers a number of unique features as we shall see, so let’s start with the furniture. I would describe the build as a demi-chassis, as the lower stock assembly is machined from a solid billet of aluminium alloy. This pleasingly includes the unusually shaped and yet practically positioned trigger guard. Most noticeable is the integral magazine well cut-out, which is massive and holds a polymer, 5-shot double column mag, with inset release catch.

There’s no separate bottom metal (mag well, trigger guard and release catch), as you might find on a more conventional build. The action screws are opposed, with the rear pulling down from above and the front up from the bottom for a recommended 8Nm (Newton Meters). This makes the action/receiver interface rock solid and consistent. Attached to either end are the polymer butt and forend units, showing a nice blend of looks and functional design.

The butt is more complex than it looks. The layout is pleasing with a long and low, angled full pistol grip, that positions the hand and trigger finger nicely for a first pad hold. The straight comb is of medium height and shows a detachable rubber section (Combtech) that absorbs some of the firing shock that would normally be transmitted to your face. Also, being smooth it allows your head to slide easily along in recoil. Interchangeable by design, Benelli offers medium and high versions, if you favour a higher-mounted scope. They also provide shims so you can alter the drop and cast to fine tune your hand/head position.

Benelli proved they are masters of recoil control with their Comfortech, inset chevron system on their shotguns. The Lupo features the Progressive Comfort module that consists of a telescopic block with a series of internal, interlocking fins that does the job. Cleverly, they have integrated this with a series of length of pull (LOP) spacers that offer an adjustment range of 13.8-14.75”, there’s also a longer version at 14.2-15.2”. Included are replacement screws of different lengths to suit.

The forend is of medium length and shows deep, concave, angled finger boards in a rectangular/tapered section, for a comfortable supporting hand hold. It fully free-floats the barrel right up to the receiver. Added grip is provided by their Airtouch chequering panels followed through onto the butt. QD sling eyes are moulded in the front and rear, along with a blanked off hole to fit a sling stud for a bipod, which is included.

The close-topped tubular receiver is steel and retains the barrel by an external nut. The 3-lug bolt offers a 60º lift angle and the handle drops down and back then comes straight out. Unusual looking, yes, but it’s comfortable and easy to manipulate, plus the underside of the knob has a synthetic insert. The shroud follows the angled line of the rear of the receiver and shows a cocked action indicator tag at its base. Sweet, is the tang-mounted safety that pushes forward to FIRE and reverses for SAFE (action AMMO TABLE locked). In this position, a small button pops up behind the bolt lever that can be pushed down so you can cycle the bolt for unloading. Rear left is the bolt release catch.

The single-stage trigger shows a medium-width and nicely curved blade and is adjustable from 2.2 - 4.4lbs. The adjuster is set into the rear face of the mag well and is accessed through the ejection port with the provided Allen key. My trigger came from the box between 2-3 lbs and offered a crisp and creep-free break, so no complaints.

The ejection port is deceptively large and easily allows single loading and topping up the mag in situ, two practical features on any hunting rifle. The release catch is integral and at the front, so swapping out is easy. From the box, it comes with two fitted Picatinny bases, but it looks like the receiver is drilled and tapped for a one-piece unit too.

Barrels are hammer-forged, then stress-relieved by a cryogenic process, something Benelli first perfected with their shotgun tubes and chokes. I’d describe the profile as a light-medium, this .308 example was threaded 5/8x24 UNEF, with a protector. Later, a 6.5 Creedmoor option had a 14x1mm muzzle.

If you like black then that’s how the Lupo comes, with the synthetic furniture and anodised chassis. The metalwork wears their BE.S.T. (Benelli Surface Treatment) finish, which is corrosion and wear-resistant and although a shiny black, is apparently non-reflective! All guns come with a 25-year anticorrosion and 10-year mechanical parts warranty. So far so good, an attractive and technically advanced design coming in at £1650 - it’s going to give other guns in this class: Sauer 100, Mauser M12 etc. some serious competition!

24” for the Creedmoor is optimum, but 22” for those two classic big hitters; 270 Win and 30-06 make little sense to me. This is not a pop at Benelli, but a trend that seems to be across the market these days.

Getting down and dirty

Some guns just grab you from day one, others don’t! The last rifle that did that for me was my beloved Mauser M03 Extreme, which is no longer in production. The Lupo, even after three shots, gave me that same vibe.

Everything seems right, getting down behind it showed a practical butt and position. I slapped on all the LOP spacers and it fitted perfectly. I love any tang safety system and this one was perfect. Bolt operation and feed/ejection were smooth and easy. The 5-round mag was 100% reliable and easy to fill, equally the ability to either top up or single load suits the needs of a hunting rifle admirably.

The beauty of the trigger is that it’s light, crisp and highly predictable, in that when you’re in the aim you know exactly when it’s going to break, which is the trick for accurate shooting. I apologize if you think I’m going over the top, but for me, it just works and that’s all that matters.

One aspect I did find was that if you choose high mounts, there is a tad loss of cheek weld that might affect your head position. But that’s covered by their Combtech options.

Benelli states that the Lupo is a sub-MOA rifle, not a remarkable claim these days and something to put to the test. I picked five factory and one reload that I use in my Remy 700 LSR II: 165-grain Hornady SST bullet over 44-grains of Ramshot TAC.

Only one load over MOA, not too bad at all, which gives an average of 0.853”. More experimentation would probably turn up different figures. One aspect of the shooting phase was the noticeable reduction in felt recoil, even with the heavier loads. Also, the lack of cheek slap often encountered on .308s with solid combs.

Love me or hate me, but I really rate the Lupo. So much so, I’ve ordered the 24” 6.5 Creedmoor model. I rate any 6.5 cartridge and always loved the 6.5 x 55 Swedish, so it makes sense to go with the new kid as that will address all my hunting needs. Price, build quality, design and shootability make any calibre of Lupo well worth consideration!