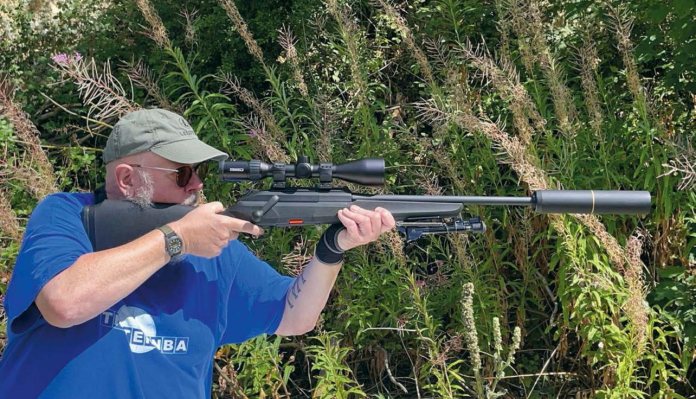 Today, we see Beretta as a producer of high-quality shotguns. An undeniable fact! So, why would they want to make a straight-pull rifle? Given, that they own Chapuis Arms’, Blaser R8-like R.O.L.S.

I have owned a Blaser R8 for 10 years and love it, so Beretta’s new BRX1’s similarity was intriguing. However, this is just skin deep, as inside it’s a very different animal. It’s a ‘plain Jane’ with a basic synthetic stock and flat finish, plus at £1500, it’s not expensive, certainly for what it offers.

Earlier on there was a factory recall, due to the possibility of putting the bolt back together incorrectly, as a feature of the BRX1 is its ability to be swapped from right to left-hand orientation. It was swiftly rectified, but give a dog a bad name and all that! However, that’s water under the bridge, as for the last four weeks I’ve been hammering rounds through the rifle and swapping bolts and bolt handles many times, with no problems at all. So, I’d say, it’s sorted!

The rifle is built entirely by computer-controlled machinery and makes maximum use of modern materials. Included is a barrel removal tool, length of pull (LOP) spacer and a Beretta recoil pad.

It uses an 8-lug, rotary bolt (16 in the Magnum version) that sits in an M16- type bolt and carrier. Probably inspired by Beretta’s ARX 160 A3 assault rifle.

Operation is by a non-rotary, angled handle on the bolt carrier. Opening the action causes the follower on the bolt to enter a camshaft path, thus causing it to rotate to unlock and eject. Reversing the movement feeds the next round and re-locks.

One unusual design feature is a carrier lock lever. With the action closed, the bolt is locked, but dropping it on its butt could overcome its inertia and move it back, the breach would not unlock, but neither could it fire.

The lever is actuated as the action shuts and rises up to hold the carrier closed and in place. A by-product of this is that the last few millimetres of bolt movement are powered, and it seems to shut automatically. As you open up, the carrier overcomes the lever and re-sets it. Check out my YouTube video on Gun Mart TV.

Unusually, you can change the bolt head to eject left or right and also reposition the operating handle to the opposite side - all in about 30-seconds. The trigger mechanism is contained in a removable polymer cassette and gives three pull weight choices.

Feed is from a detachable, 5-round, double-column box mag with twin integral release catches in the base. It’s blaze orange, so hard to miss, or loose. The open nature of the action gives 100% access for topping up or single loading in a hurry.

The stock is in three pieces. There’s an aluminium lower chassis that mounts the magazine, trigger, barrel and bolt carrier assemblies, with the polymer forend and butt (including integral trigger guard) bolting to it. The build is ambidextrous with a medium-height comb and an angled pistol grip that is exchangeable, much like Tikka’s add-on furniture. LOP is a generous 14.5”, with spacers offering 0.5” increments.

The forend is rigid and uses cross bracing for the purpose, plus effectively free-floats the barrel. Gripping swells at the base offer a bit more girth for the supporting hand. QD sling studs are fitted fore and aft in the usual places.

The BRX1 uses a sliding de-cocker with a hinged latch that’s located at the rear of the bolt carrier. It offers three positions: 1 - fully down, bolt locked and de-cocked, 2 - slide it up about 1/8” where you will see a white line, de-cocked with bolt operation. 3 - press it up a further 1/4” and a red line appears, fire mode, you shoot and cycle the action which automatically re-cocks. To reverse this, press the latch, which allows it to move back down.

If the bolt is removed and the catch is in position 1, it won’t go all the way in when re-fitted, unless you push it back up to 2 or 3.

The barrel comes with an integral Picatinny scope rail as standard. Optional/extra is the choice of a 17mm dovetail and Beretta’s Quick Coupler, QD unit. The Pic rail means no expensive, dedicated mounts, so you don’t have to spend an extra £400+ for the pleasure of fitting an optic.

The barrel attaches to the stock by, integral, twin, captive, 6mm Allen studs located at the front of the alloy chassis under the chamber section. The sides are tapered inwards at the base to cradle and position the chase, with a recoil lug at 6 o’clock. The nuts must be tightened to a torque of 10Nm. Beretta is adamant about this, each time a barrel is refitted. If the screws are too tight and forced past their elastic limit, recoil forces could cause them to fracture. I fully understand, but the standard barrel key is not a torque wrench, so how can you be sure? They also say that if this happens, and the barrel is incorrectly set up, it could void the warranty. I made a 6mm Allen key conversion for my torque wrench.

Are people going to bother, or just get it as tight as they can by hand and take the chance? Saying that, Blaser recommends a setting of 10-12 Nm for their R8, but goes on to say, hand tight with their barrel key will also suffice.

To remove the bolt, set the decocker to position 2 or 3 and pull the carrier open until it stops. You will notice a small, vertical catch on the left side. Push this up and pull the bolt rearwards off its guide rails.

First the trigger. Remove the magazine and at the rear of the action, you’ll see a chromed steel clip (like the hook on the end of a tape measure), which needs to be pulled up (use a small, flat-head screwdriver) about 1/16-1/8”, to unlock the cassette. Push it forward off its rails and remove it downwards through the mag well.

On the left of the cassette is a knurled, plastic button that pushes up and across (to lock in place) for the first two trigger weight settings of 2.8 and 2.4 lbs, then fully up for the last at 1.9 lbs. Refit in reverse order, not forgetting to lock it in place before reinserting the mag.

To allow you to swap the bolt handle over, you must first remove the bolt head. Turn the carrier over and look where the bolt head assembly enters it, and you will see a plunger at the front of the cam path. Press it down so it clears and draw the 2-piece bolt body out. The front section with head slides off in a transverse dovetail.

Slide it off, rotate it 180, refit and reverse the disassembly process. Looking at the bolt face, the ejector plunger is on the right for RH ejection and on the left for LH function. It solves the problem of lefties having to pay through the nose for a dedicated, left-hand action. Plus, both options are independent, so you can mix & match, with left-hand ejection/operation or vice versa.

Got a handle on that

Turn the carrier over and press the silver button adjacent to the operating handle, then pull it out and slip it into the opposite side. You will notice orange stripes where it angles down and these are there as a guide. If you can see them then it’s not fully inserted. Apparently, Beretta made six modifications to sort the recall problem.

That’s about it for features and how it works. To be honest, it takes a little bit of time to understand the trigger adjustment and bolt switching processes. GMK also provided a Stalon moderator, Steiner scope and bipod.

Beretta says the rifle is good for sub-MOA groups at 100m, which is what we expect these days. I ran eight different loads, lead and non-lead through it from 130-grain Barnes TTSX up to Hornady 178-grain Precision Hunter. The Barnes 150-grain TTSX managed the best groups at 0.7” and the worst came from the PPU 165-grain at 3.0”. Velocity and energy were not in question in the 22.5” tube, as is to be expected from a .308 Win. Averaging it out gave a mean group size of 1.125”, so a tad over MOA - good enough. However, with the right load, it will shoot the promised sub-MOA.

The action initially felt firm in movement, but, like any straight-pull, you must operate it with authority to ensure consistent function. Nice, is the fact the rear of the carrier does not tap you on the nose when it’s open, so no flinching. Ejection is good and deposits the brass in a neat pile about 4 ft away.

Feed and function were good, although as with any straight-pull, primary extraction is paramount. If your ammo is too hot, then it can stick to the chamber wall and make unlocking and opening difficult. But it liked the loads I fed it.

It comes easily to the shoulder and proved well-balanced, pointable and instinctive. Given the initial calibre choice, all .30s, the BRX1 feels very European and intended primarily for driven hunting. However, in .308 Win it’s a Jack of all trades and offers comfortable recoil characteristics too. For me, I’d put another 0.5” spacer on to bring the LOP up to 15”. Beretta offers a number of spacers and different depth recoil pads.

The magazine change is easy, but the movement on the catches is very short and felt like they had not unlocked, but that was just a matter of getting used to it. Single loading is fast and instinctive, plus you can top up the mag through the action too. As with all sliding de-cockers, the movement is too firm, and it’s easier to drop the muzzle, or do it with the rifle at low port, and then shoulder it. You work it out!

The trigger is a compromise, as all multiple weight systems are. I would have preferred a single 2 lb setting and a bit more finesse. In use, 1.9 lbs gave the best release, with little drag, while the 2.4 and 2.8 lbs settings felt mushier as the weight increased.

The BRX1 certainly splits opinions. With negative comments to the basic finish, firm action stroke, trigger and the need to set the quoted barrel torque, this last one could be the deal breaker. On the plus side, the ability to easily swap left to right-hand orientation, the Picatinny rail and the price, all get the thumbs up. There’s no doubt Beretta has made a good rifle in many ways and I genuinely like it.

This is not a Blaser R8 and nor is it meant to be! Where it scores is for those who want a straight-pull, and up to this point, there has never been one that offers so much at such a great price. Beretta would be missing a trick if they did not move the design forward, as it’s ripe for it. Wood furniture, different stock designs and materials, better/different metal finishes and more calibre and barrel weight/length options, would elevate the BRX to the next level and beyond. We shall see!