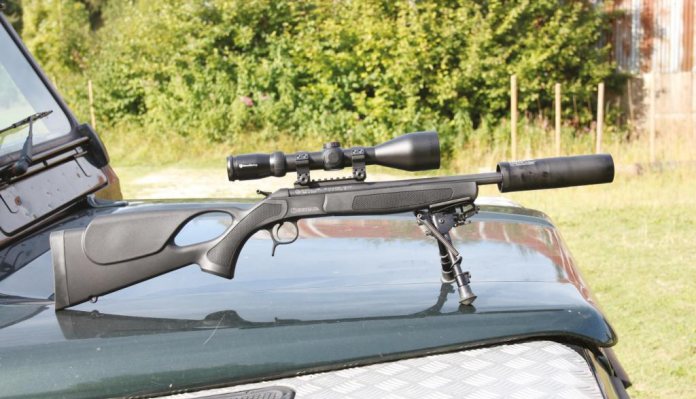 I’ll set my case out from the start; I can’t quite see the point of the 300 Whisper or its modern reincarnation the 300 AAC Blackout! Yes, I understand that both these identical cartridges offer a sub-sonic, centrefire, .30” calibre option, based on the 223 Rem/5.56x45mm case. The original attraction was for the military, as you could reconfigure an M16 platform with a new barrel to offer a near fully suppressed covert rifle.

However, and as with most new calibres, the Whisper/Blackout has entered the sports shooting world where its gained a bit of a reputation. Yes, with the right ammo it’s quiet, so would be useful for shorter-range fox control, perhaps where a moderated, high velocity centrefire calibre might be too much. Trouble is that in its true sub-sonic and quietest form, it requires a big bullet of at least 200-grains, which from the diminutive 223 case comes out slow with issues on reliable expansion and low muzzle energy.

Step it up a bit

However, a side effect of this little 300 is that it can be used with lighter bullets given you get the rifling twist right for both target shooting such as long range gallery rifle and fox control/small deer use. In the latter case the noise goes up as the round is now super-sonic but the energy level does too to 1000 ft/lbs +, so good for Muntjac or Chinese water Deer (CWD). But I still see it as over specialised. Well that’s my whinge out of the way, and as I’ve said before on long barrelled pistols, if you like it then I respect and support your right to own it!

The rifle is the B13, which uses a simple, single-shot, break-barrel action. This build is perhaps best remembered from Baikal’s IZH 18MH rifle and the Harrington & Richardson Topper interchangeable shotgun/rifle models. I was talking to Brian Fox (Fox Firearms) about the B13 and he said he would send me down something a bit special! Then went on to say it was in 300 AAC Blackout; here we go again!

To be honest, the B13 is a well put together rifle and by design allows quick and easy barrel exchange; as the standing breech/ action does not change because the extractor is fitted into the chamber, so similar to a break-barrel shotgun. There are two options; the standard B13 and the B13 Take-Down (on test), both use, unsurprisingly, a Bergara fluted tube in either AISI4041 carbon steel or AIS416 stainless. They are button rifled, after being deep drilled and honed. The B13 offers two lengths – Standard 23” and Compact 20” with optional 5/8th x 24” threading with protector and a Picatinny rail as standard. There’s also options on furniture, with both wood and synthetic in sporter and thumbhole styles and can be ordered handed too and in a choice of finishes, including camo.

The B13 Take-Down uses an identical action but in black synthetic thumbhole furniture with a choice of 20 or 16” barrels but no iron sights, threaded as described. The major difference is this model has a latch in the forend that allows it to come off easily. Like a break-barrel shotgun the forend is part of the mechanism that retains the barrel. The B13 comes apart the same way but has a screw that must be removed first.

The general design is simple, as befits a gun of this type. The barrel latch uses a hinged trigger guard like the old Thompson Center Contender; with your trigger finger squeeze the tang at the front and at the same time pull the barrel down and open. There’s an integral extractor plate at 6 o’clock in the breech face that only lifts the fired case up enough to be pulled free with your fingers.

The B13 shows an external hammer and does not offer a separate safety catch; instead the mechanism is of the reboundtype. Here, in the unlikely event of the hammer falling without the trigger being fully pressed, it will automatically go into a half cock type position and not contact the firing pin! Equally, when fired, it will also bounce back to this position. So no problem carrying the rifle hammer-down with a round up the spout, as you just thumb cock to get ready. Bergara includes a 90° hammer spur extension, which allows easy operation with a scope fitted.

The test rifle from Brian was a little different too, as the barrel was shortened to 14”. Bergara is imported (trade only) by RUAG AmmoTec UK Ltd and they also supplied him with one of their new Hausken JD184 moderators. It’s a muzzle-mounted design with an unusual fitting method, as it comes with a top hat adaptor that screws onto the muzzle thread. I suppose it’s practical, as all the moddies have a single thread, which eases production and you just order the adaptor that fits your barrel.

As can be seen, the Take-Down is a good looking rifle and nice and compact and I really liked the thumbhole stock, which offers a pistol grip and a high comb that gives a good head/scope position. The trigger pull was good, breaking at a crisp 3 lbs, but and as with any external hammer action, the dwell time is a quite long as it falls, as opposed to being propelled in a straight line like a firing pin.

For the test I fitted a Harris BRS bipod and a 3-12x50 Nikko Stirling scope. Brian supplied some Hornady Custom 208-grain A-MAX 300 Whisper ammo and I had Hornady Custom 110-grain V-MAX Whisper along with Remington’s 125-grain Sierra OTM 300 AAC Blackout. So a reasonable selection to see what the rifle was worth! All testing was done off the bench with the bipod and a butt bag at 100 yards and the results proved quite enlightening.

I wanted to establish four aspects of the calibre – accuracy, velocity, energy and signature. At 1-8” twist I was unsure whether the lighter V-MAX or OTM ammo would even group, though the A-MAX seemed the most promising. Starting with that I got the rifle zeroed quickly and it was shooting around .75”, which I thought pretty good. I then switched to the 110-V-MAX and in the immortal words of the late Cilla Black; “surprise, surprise”, it came in at ½”; not that logical for a light bullet but that’s what happened!

Turning to the 125-grain Remington I was expecting better, as the bullet is a more Match-type, as opposed to the stumpy little V-MAX. Not so, as it barely grouped, shooting a ragged 2.5” +!

I only tested the two Hornady loads for moderation effect. The 208 A-MAX sounded like an un-moderated 22 sub-sonic, so not deathly quite at the muzzle but down range very little signature, with the bullet sounding like a bee as it buzzed overhead. The 110 V-MAX was obviously louder but nowhere near as say a 223 Rem 69-grain match load, so still pretty quiet! So the stealth factor is definitely there. Assuming that for fox control I doubt if I’d push it much past 100 yards! So let’s look at retained velocity/energy and trajectory out at 200 yards from a 100 yard zero in table 1 and 2.

Apart from the greater moderation effect offered by the 208-grain A-MAX load I don’t think there’s much else to recommend it. Plus expansion is unknown and it’s low muzzle energy and bullet type rules it out for any form of deer shooting. So the 110-grain V-MAX gets the nod as it aces the A-MAX in terms of energy, speed and trajectory hands down, plus will still probably expand well and predictably and is fox-worthy and small deer legal!

Without doubt an interesting test and the best results I’ve ever had from this calibre. In the unlikely event of me getting one, it would be in a 16” AR15 with the barrel optimised for a 110-grain V-MAX reload and I’d live with that little bit of extra noise!