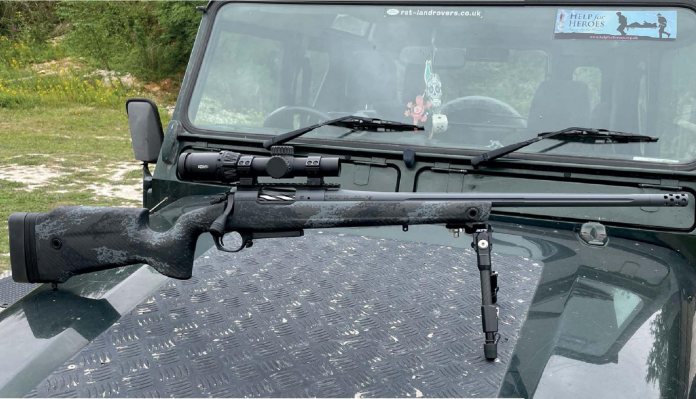 Bergara is a Spanish firm who got their rep making barrels, then inevitably expanded into rifles. The first one I tested was their switch-barrel BX-11, which was large and rather unhandy. It worked but did not blow my skirt up and is now history. Soon after, they announced a new model called the B14, which was to become their main success story.

Wisely, Bergara went with a Remy 700-type action and footprint, meaning aftermarket stocks and accessories would fit right on. It was a success right from the off. Soon the floor plate magazine was replaced by a detachable box system and everyone, including me, was raving about the generic B14. Which, like Little Topsy, grew and grew into a diverse family of rifles that offered specific models in a choice of stock materials, designs and finishes. This even included a .22 Rimfire trainer, the B14R, which is a sweet shooter. Check out my YouTube review at gunmart. net.

There are two models I really like. The first is the HMR (Hunting and Match Rifle), which offers a medium/heavy tube in a solid, synthetic stock with adjustable comb and length of pull (LOP) spacers, plus an inner aluminium bedding block and spine. Second was the BMP (Bergara Match Precision), same barrel and action but in a very nice adjustable chassis system. I bought a 24” HMR and your Editor, Ed Jackson, the same spec BMP, both of us choosing the 6.5 Creedmoor option.

The catalogue shows a lot of B14s offering variants of the HMR furniture in various materials, which makes sense as it’s a good design. So, onto the subject of my test, the B14 Crest, which Bergara bills as a mountain rifle, in that it’s light and easy to carry for long distances over tough terrain. Equally and more realistically, it’s just a light, handy and eye-catching design in a simple choice of barrel lengths and calibres that will appeal to many shooters, especially at the price and given the features on offer.

The HMR-influenced furniture is obvious, with a carbon fibre outer skin and foam-filled inner in the same McMillan M3/ M5 style, with a deep, high-combed butt and large, upright pistol grip with palm swell. However, the comb is nonadjustable, but about the right height so as not to cause head/scope alignment issues. As before, LOP is by spacers.

Feed is from Bergara’s AICScompatible, synthetic, 3-round magazine and its purpose-built bottom metal shows an ambidextrous release paddle. The 5-round HMR mag will also fit.

The stock offers a full forend with QD sling studs fore and aft, and side-mounted cups for QD swivels. The colour is eye-catching, with a grey base with darker, grey/brown overtones. LOP is between 13.75 and 14.5”, but extra spacers are available if required. Into this drops the barreled action, being the standard B14 design with stepped receiver bridges drilled and tapped for any Remy 700 base or rail. Bergara now offers their own Picatinny rail and importers RUAG supplied one.

The safety catch is rear/right of the action and is a simple 2-position rolling lever. So, forward FIRE and rear SAFE with bolt operation. The bolt release is on the left and there’s a shroud at the rear with a red, cocked action indicator pin. The trigger is wide, nicely curved and adjustable. It came from the box at around 2.5 lbs and broke crisp and clean.

The bolt shows twin locking lugs and a fluted body, with the usual sprung plunger ejector and extract claw inside the recessed head. The handle, again, like the HMR’s, is long and angled with a tapered knob, plus it offers easy operation for the cock-on-opening mechanism.

Barrels are medium/heavy build and semi-fluted for half their length. They are threaded 5/8x24 UNEF and come with a protector, cage-type brake and are generously free-floated in the forend. You get a choice of 20 or 24” and just a brace of calibres; .308 Win and 6.5 Creedmoor. Twist rates are 1:10 (.308) and 1:8 (Creedmoor). The weight differs depending on length with the 20” at 3.1Kg and the 24” at 3.3 Kg. All the metalwork is finished in Cerakote Sniper Grey and as you can see, the Crest offers a good-looking, wellpresented, well-featured, easy handling and attractive package, all for under £1600.

My tester was the 20”, .308 model. However, I must admit I was hoping for the Creedmoor chambering, but that’s what came out of the box. Saying that, with that barrel length, the .308 makes much more sense, as it’s one of those calibres that is far more agreeable to shorter tubes. To be fair though, a 20” 6.5 CM, although a bit short, would doubtless make at least 2000 ft/lbs with a 140-grain load and be good enough out to 200/250-yards. However, my initial choice would be the Creed in the 24” option! Maybe a tad long, but with say Norma’s 143-grain BondStrike ammo, it would easily hit 2700 fps and 2350 ft/lbs.

For the test, RUAG also supplied a Meopta 1-6x24 scope, which I thought was a bit low-powered to assess accuracy that well, but it was there so I used it. But in some ways, it suited the lightweight concept of the Crest. They also included the H.M.S. BONE bipod, which I’ve done a video on and an article in Gun Mart too. Finally, to finish off the rifle, a Haukson muzzle-mounted moderator, again, light and compact with effective sound suppression.

Ammo again was from RUAG, as they import some of the major European brands. I was sent Norma’s 170-grain TipStrike, which is a lead-cored load, plus two non-leads; GECO’s Star, 165-grain monolithic hollow point and RWS’s 165-grain HIT, which uses a similar construction, but with a ballistic tip to initiate expansion. To illustrate the difference in a shorter barrel, I have also included the factory data for these three, which to a degree also illustrates the efficiency of the .308 Win cartridge in a 20” tube too, when compared to other calibres.

Bergara says that the Crest should be capable of 1 MOA at 100m, which these days is pretty much the claim from just about every rifle manufacturer, which is realistic and what we should expect.

As can be seen, figures differ. The HIT proved the winner by far at 1”, with the best velocity and energy and a drop of only 13 fps over factory. The GECO did surprise me, as from past experience it has done 1” or better in a cross-section of guns. But with a difference of only 7 fps and 1 ft/lb, it was very much on the money, but still not a fast round. Norma came in at 1.2”, so almost MOA, but with a drop in velocity at 71 fps and 124 ft/lbs.

Regardless, all are more than capable in terms of what they produce of doing the business, even on big red stags.

So, with its accuracy abilities proven, what does the Crest shoot like? Well, overall, it’s a handy rifle, as even with a moddy fitted, it’s quick on target, plus points and shoulders well. Given the barrel profile, I reckon the 24” model would be a little nose-heavy and in all cases, less agile too. I expect the user would fit a larger mag scope, which would add to the package, so subtracting from some of its benefits.

But as well all know, we all tend to over-scope and over-accessorise our rifles. These are facts, that as I get older, I try to address. So, and despite my comment about a 6.5 Creedmoor at 24”, I think I’d stick with the 20” 308 version, and probably fit my S&B 1.5-6x42 Zenith compact scope. Oh, and a small moderator, to preserve the rifle’s sweet handling potential.

The action ran smooth and slick with reliable feed, function and ejection. I would however get a couple more spacers, as I found the LOP a tad short for my long arms. On that point, the thick recoil pad proved efficient and the rifle was not that kicky in the shoulder anyway. The muzzle brake worked well enough but be aware it increases the muzzle signature exponentially. So, nice comfortable stock, well made, with simple and efficient controls and I love that HMR bottom metal with its detachable magazine and ambi release catch. Plus, the trigger guard is nice and big for a gloved finger and the whole rifle is most pleasing to the eye, because curb appeal will always sell a gun when on the rack.