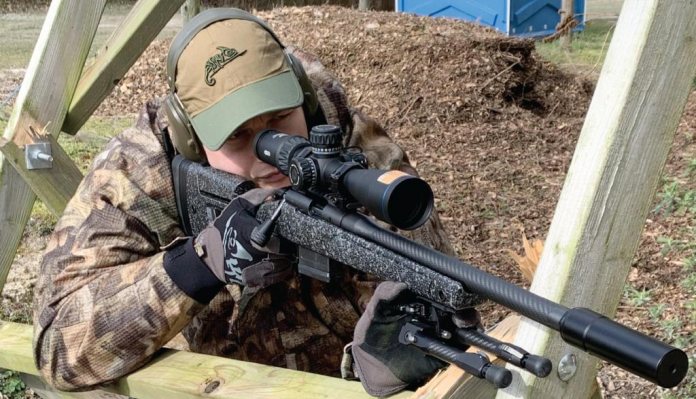 It is perhaps the Americans who drive most things in shooting and they are the originators of a rimfire revolution. Given that the generic AR15 is the most popular 223 Rem semi-auto out there, it was only a matter of time before dedicated 22LR guns were produced. Cheaper ammo, easier to use due to their reduced ballistic footprint, you have an identically functioning rifle at a fraction of the price and running costs; what’s not to like?

With the advent of more long-range disciplines, such as the Precision Rifle League (PRL), some form of identical, rimfire cross trainer was a natural evolution, which has also generated a 22LR league. So, even if you can’t afford all the whistles and bells of some very expensive, centrefire hardware, you could still compete at a level. Or, if you simply wanted something a cut above your standard rabbit gun for hunting and the equally growing trend in pushing this diminutive calibre to its limit.

One of the great success stories of the last few years has been Bergara. This Spanish company started off making good quality barrels, but soon moved on to full rifles.

Their most successful and current product being the B14 bolt-action in various options, of these, two stand out the HMR (Hunter Marksman Rifle) and the BMP (Bergara Match Precision). Identical in all things apart from furniture, as the latter is a chassis system and the former uses a quality synthetic stock with inner alloy spine, both units being adjustable for length of pull (LOP) and comb height. Built on a Remington 700 foot print, with medium/heavy 24” barrels and chambered in a few calibres including 6.5 Creedmoor, they have become an off the shelf solution for many precision needs. Plus, they are good to go from the box at what today is excellent money, which is attractive for the potential buyer.

This year they added a most grown up 22LR, the B14R (rimfire) Trainer in a choice of carbon fibre wrapped or standard steel barrels on an HMR stock. Interestingly, weight is very near the mark of their centrefire siblings, even though the barrels are 18” and not the 20, 24 and 26” (depending on calibre) of the fullbores. So, what you have is a full-sized HMR with all its features but chambered in 22LR. On test, I have the Carbon.

Currently, the R series only come chambered in 22 Long Rifle (LR) such is the thrust of the concept. However, in the UK, where there are possibly more rimfire users than in Europe, it would be nice to see something at least in 17HMR, but I’m just guessing here.

I own a 24” HMR in 6.5 Creedmoor and the stock is identical dimensionally. The colour is dark grey with a black, splatter pattern over the top that also gives a deal of grip, Bergara describes it as a Graphite/black Cerakote finish. There are also cast-in textured panels on the grip and forend. The look is very much McMillan A5, with the butt under-cut to form a rear grasping hook, which is excellent for prone/bipod use and the deep, stepped back pistol grip is near vertical and fills the hand nicely to give a good, first pad finger position. A height-adjustable comb is controlled by a simple thumb lever on the right side and length of pull (LOP) by three, removable spacers and a thick recoil pad. Maximum LOP is 14.5”, so more than enough!

The rectangular and slightly tapered forend is medium width and seriously rigid, as it has a central, aluminium strengthening bar and free-fl oats the barrel too. This is in fact part of the integral, mini chassis system, that the action sits, rock solid in; to be honest, there’s no need for synthetic bedding and the pillars are already sorted. Bergara have done a good job here, as the tube sits dead centre in the channel, with no metal touching anything.

Three QD sling studs are fitted; one under the butt and two up front, plus four, flush cup/sockets for QD swivels (two either side) at front of forend and rear of the butt. Overall, this is a very nice piece of furniture and eminently shootable!

The B14 is a Remington 700 clone action, so everything fits, from after-market magazine systems to replacement triggers and also furniture, although in the case of the stock on the R Carbon Trainer why would you want to replace it? The bolt handle comes down straight and is finished off with a tapered knob for easy manipulation. The safety is a rolling lever, rear/right that goes forward to FIRE and reverses for SAFE, but in this case doesn’t offer SAFE with bolt operation.

The bolt shows a shroud with a cocked action indicator at the rear and there’s a large release catch on the left, so much better than that tiny plate inside the 700’s trigger guard. The body is in two pieces and locks in the middle via twin lugs, with the long, fl oating, head section showing two support wings. This is almost a direct copy of Ruger’s M77 rimfire series design. The face shows twin extractors and ejection is by a fixed blade in the rear of the receiver. The throw is the same as a short action like the Creedmoor, so familiarity is guaranteed.

To keep in with the clone theme, feed is from a full-sized, centrefire, detachable box mag, with a 10-round .22LR stick moulded into the front, Bergara does not include a spare, which would have been nice. The carbon fibre barrel is 18” long and threaded ½ x 28” UNEF for a suppressor with protector. The diameter is 23.3mm with a #6 profile, so it’s fat and rigid and compared to the steel tube, which is identical in size/shape sheds 1.1 lbs off the overall weight.

Kudos to importers RUAG, as they supplied a load of accessories, which is always nice. From Tier One, I got a ZERO MOA Picatinny rail, 30mm Rings with level bubble, Picatinny Forend Adaptor and a Tactical Carbon Pan/Tilt QD bipod. Moderation was provided by a Hausken MD35 moddy with nut adaptor. Finally, one of the new Meopta Optika 6 4.5-27x50, SFP scope, which will be on full test next month. Overall, a great looking package with some potential, time to get some ammo!

Suck it and see

I suppose match ammo would have been best, but I could not get any, so settled for some RWS sub-sonic HP and their High Velocity HP along with Norma subs all at 40-grains from importers RUAG. I also added two 42-grain loads that worked well in other guns; Winchester 42-grain MAX subs and Eley FORCE High Velocity. See: BERGARA BALLISTICS.

Accuracy was tested at both 50 and 110 yards, supported off the bench, with some interesting and varied results. What I found most interesting was the Eley FORCE, which has shot some stunning groups in other rifles, did not do so well at 110 yards, yet was going ½” @ 50 and it wasn’t a windy day. Equally, my S&W 15/22 semi-auto, with its skinny 16” barrel shoots the Winchester subs at around an inch at 110 yards.

First impressions are of a comfortable and rigid stock with enough adjustment for just about anyone. The single column magazine fi lls easily with just a bit of pressure needed to get number 10 in. It’s held in the well by a large, ambidextrous catch at the rear and mags fall free on operation. Feed is reasonably smooth and the trigger broke at a crisp 2lbs, although it can be adjusted easily enough, but you need to take the action out of the stock.

I was not expecting any serious dramas, but with any rimfire rifle you are at the mercy of ammo quality, as they are made in their millions and as most of us have encountered the occasional low or high powder charge which can turn a sub- ½” group into something over the inch. Frustrating, but not a lot you can do and, from my experience, it can happen with even the top brands. The B14R was turning in some great groups, but a few were marred with the above issues, so I tended to discount the more serious flyers to get my figures. I also experienced the odd light strike, that to be honest I could not work out if it was the gun or ammo, but reinserting the round and trying again always worked. However, it was a bit annoying. And with the Eley FORCE, which has a blackcoated case a few failures to extract, which I put down to the slippery finish, compared to raw brass.

Overall, I really liked the B14R, the stock is great and the whole design slick and pleasing. For what you are getting the price is competitive with the Carbon at £1238, for what is a very professional and well presented rifle. With the right ammo, this makes a great cross trainer and also something that can wipe its face in longer range 22LR shooting. The steel comes in at £1142, also you can just buy the barrelled/ action with bottom metal and magazine, that can drop into any Remy 700 or Bergara furniture.