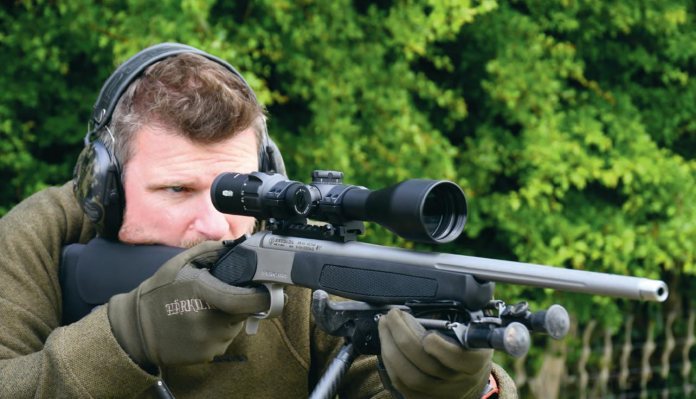 You don’t see many modern break-action single-shot rifles, but the concept of a smaller, less expensive rifle caught on with great popularity in the US, with guns like the Thompson Center. I kinda like them and love the simplicity and purity of that ‘one shot’ ethos.

The stainless-steel folding action is broken open with a lever hinging under the grip, which is effectively the trigger guard extension. Drawn back, it unlatches the action and you can flick the gun open under just its own barrel weight. The rifle is a non-ejector, so a stout steel extractor claw draws the spent round from the chamber sufficiently to allow fingers to grasp the case. I liked the fact that the extractor claw pleasingly snaps over the rim, with no tactile doubt as to the cartridge’s satisfactory insertion. You get an assured deluxe feel as you gently push a new round in position.

The forend shows an underside lever to unlatch it and the whole thing disassembles much like a shotgun mechanism, with simple instructions on how to adjust the mechanism for assured grip. It is obviously not free-floating and this 6.5lb gun feels delightfully balanced and responsive with purpose.

Lock before you leave

With the rifle loaded and action closed, the rifle is inert, as it can’t do anything until the hammer is manually cocked. Which, incidentally, shows a lateral extension bar that can be swapped to either side, almost making the rifle truly ambidextrous, but there is a very hard-to-notice righthand cast on the stock.

Deliberate operation is required to cock the hammer back and you are now ready to fire, there is no safety catch and it doesn’t need one. You can de-cock the action with thumb pressure on the hammer, allowing it to lower slowly after you simultaneously squeeze the trigger.

Although looking quite basic, the trigger’s narrow blade was crisp, with a firm 1750-gram break, no detectable creep and just 2mm of overtravel.

The matte-finished, stainless barrel is 20” long and shows a 17mm diameter at the muzzle, which is threaded 5/8”x24. It swells very slightly before the chamber reinforce and shows six flutes. Screws fasten a Picatinny rail directly on top for assured scope mounting precision. None are fitted, but the barrel shows threaded holes for open sights, and I have shot driven game targets with other BA-13s and found the Monte-Carlo comb allowed a very repetitive cheek weld for me to gain an automated point of aim with the ‘opens’.

You won’t overwhelm the rifle

Like the forend, the butt is injection moulded polymer, with a slight mould joint and an ambidextrous Monte-Carlo cheekpiece. Following a tap, there’s some reverberation and deliberate attempts to damage the surface with a fingernail proved pointless. A 20mm thick rubber recoil pad caps everything off.

The forend stud will take a bipod or sling and another is moulded into the underside of the butt. Extensive chequering is moulded into both forend and grip for an assured and warm hold in cold weather. The ambidextrous grip is on the slim side with no palm swell, yet the open radius is spacious and tactile for fast deployment.

This rifle looks small but the length of pull came in at a respectable 14 1/8”, so well done Bergara. The fact you don’t swamp and physically overwhelm the gun becomes more appreciably beneficial as calibres go up, as you still maintain control because it fits you well. Twin screws hold the recoil pad in place so that spacers can be added if desired.

When driving around a farm I find it very useful to have a gun that is comfortable to shoot from either shoulder, which makes this a very nice candidate for a ‘cab gun’, especially when combined with the external hammer and inherent safety factors offered by the mechanism.

Folding the action of a rifle is always going to require slightly more positional shift when prone, but because the length of pull and comb height suited me well, I found re-acquiring my position accurately quite intuitive. The low weight also assists manoeuvrability, but in fairness, this is a hunting gun and not a group shooter, so needs to be reliably accurate, not endlessly precise on paper. With the lever pulled, all you do is lift the grip and the rifle would hinge open with the bipod feet pivoting on the floor or bench. Withdrawing spent brass is easy with the wide gape offered.

A bolt action is faster and requires less positional movement by the shooter but until you have tried one, don’t totally dismiss the gun as being awkward, it’s not, you quickly get used to the alternate approach and ingrain it into your muscle memory.

When standing it handles like a nonextracting shotgun and frankly, in anything other than a rushed backup shot or deliberately fast fire situation, the unobstructed access to the chamber is easier than single loading a bolt action rifle. Perhaps add a stock pack with ammo storage in loops for ultimate speed.

Bergara barrels are deep drilled and lapped before being button rifled. Their ‘post button’annealing shows reliable thermal stability long- term on their conventional precision rifles and other bolt-actioned hunters. This gun held zero over 10-shot strings and in honesty, I treated it quite roughly to see if any action slack would develop - it didn’t! Three shots within 1 MOA on target was reliable about 95% of the time but it was never worse than 1.3 MOA. Interestingly, it was an easy gun to handle and shoot, even from improvised positions, and as this is a hunting rifle, I’m at no doubt over the reliable capability.

The 1:12” twist rate helped to produce sub– MOA groups with lighter, 139-grain .30 cal nontoxic ammo, which was ideally suited to this twist rate. Conventional lead bullets showed little specific preference in the barrel and although you might think ‘oh I need smaller groups’, don’t forget the overall everyday capability and reliability with any ammo. In .308, the shorter barrel also has a less detrimental effect on muzzle energy, which will easily remain legal. A .243 I have used in the past was not quite ‘there’ for 1700 ft-lbs, given the short tube.

The BA13 is a nice, unusual gun. It is just a pleasure to shoot. I have used them in .222 Remington and .243, and the former was adorably delicate and when considering the Picatinny scope rail, a massively versatile gun for inexpensive functionality.

The rifle also makes a fantastic learning tool, as it focuses the experienced shooter on making that single shot count. For a total novice, it simplifies everything, with more direct visual and tactile access to the safe loading and firing procedures needed for any rifle, without complicating handling drills with magazine systems.

The rifle is light but even in .308 without a moderator, it’s not a pain to shoot. The recoil is linear and the low profile and direct recoil path assist this, plus the absorbent but not soggy recoil pad helps. It offers a reliable trigger to attain consistent performance and I can see this as being an ideal gun for a farm vehicle, always handy for opportunistic shots and an ideal platform to mount a night vision scope to, or when you want to leave your regular bolt gun and optics well alone.

Incredibly good value for a capable rifle to keep in the truck on your rounds. It’s ultra-compact, almost ambidextrous, and faster than you would think to operate, with a crisp trigger helping you to achieve the best accuracy. In a smaller calibre, the Pic rail makes it ideal as a secondary rifle for Night Vision. The heavier rounds are certainly lively but fundamental rifle capability is assured and the 139-grain Norma EvoStrike really hit the spot. Notably, both of Norma’s ammunition options proved a touch faster than advertised in this short barrelled rifle.