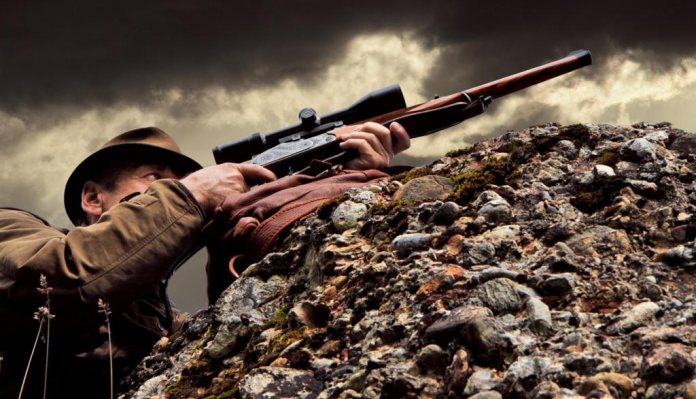 When you look at the Blaser K95 in the cold light of day, as a Brit, why would you want to buy one? It’s a single-shot, non-ejector, expensive for what it is and you have to shell out more for the scope mount. That’s what I thought when I opened the box and this decidedly un-British little rifle came out; however, it’s perhaps the sweetest thing I have ever used, bar none! And I state now, if I had the money, I would have a K95 tomorrow!

So how come Mr Hightech, wood’s for burning and synthetics are for serious rifle stocks etc. has had such an epiphany? Well, it’s such a dainty little thing, with its classic looks and styling and compact 19.5-inch octagonal barrel with iron sights and I just love the Stutzen (full-length) forend build. Though Blaser have been clever here with a rear, detachable forend section, so you can take the barrel off. Mine was in 6.5x55 Swedish, though barrel length and calibres do differ according to what you want!

If you were wondering about the Stutzen build, my research shows the word in German translates to ‘support’ in English. Reading up on the subject indicates that this style was popular on mountain rifles, where the barrel is fully protected from knocks and scrapes, if for example you used an impromptu support like a rock. The semi-Schnabel tip of the K95’s forend also protects the muzzle too.

It’s available in a good choice of calibres, from 22 Hornet (klein kalibre) the normal stuff and right up to the big magnums, including 375 H&H and the 10.3x63 R Swiss, in rimmed and rimless options. Having shot a 30-06 version a few years ago, which was a tad jumpy, I don’t think I’d want to go much bigger; that’s why I picked the Swede, as it has the power and accuracy for most game I hunt. However, Blaser offer their Kickstop recoil reducer that fits in the butt, which I would consider mandatory for the snottier stuff!

The beauty of the K95 system is that you can add calibres by simply swapping barrels. The process is simple and fast – with the action shut, pull the latch down in the forend and pull it down and off, then open the action and unhinge the barrel and you’re done!

It’s light and handy in use and comes up like a quality shotgun, with slick and instinctive handling and pointability. The timber too is nice (did I just say that?) with a hog’s back butt with Tyrolean cheekpiece and slim rubber recoil pad; on the Baronesse, it’s either Grade 6 or 7 walnut, which is where a big chunk of the money is going, along with some subtle Fine Arabesque engraving on the action and ebony forend and grip caps. There are optional patterns depicting game species too. The removable, gold-coloured locking block is titanium nitride coated for corrosion resistance and a smooth action. That little lot will set you back around £11,000 and it does not stop there; with other models going up to Grade 11 timber, more decoration and Ruthenium coatings.

By comparison, the Standard version is much plainer with a round barrel, Grade 1 wood, half forend and a plain action. Same rifle apart from the bejazzle, but that drops the price to around £3000. But my choice would be the Stutzen Black Edition, which is all-back, apart from the furniture. Well, you know what they say; if you’re going to go, then go large!

The generic term for this sort of rifle is a Kipplauf, which is break-barrel in German. The K95 is essentially a breakaction, single barrel shotgun layout, with a top lever and detachable forend to facilitate barrel removal. As such, there’s no safety; instead, the familiar, tang-mounted de-cocker (kickspanner) we know from the R93 and later R8 straight-pulls, though it looks a bit different on the K95 and a bonus is that it’s easily operated from the firing position, unlike the bolt guns. With the action closed; push the kickspanner forward to cock and ready for firing, pulling it back de-cocks it, as does opening it up, where it slides back automatically.

Locking is by a removable block, with a lug that engages in the roof of the chamber extension. Blaser says that this can be removed to render the rifle un-shootable; true, but just leave it where it is, is my advice! I’ve seen too many trigger locks, or even bolts left behind, if separated from the rifle. One thing you have to get used to, is the fact that the K95 does not eject the fired case, just raises it up about enough to get your fingernail in to flick it clear. Simple and reliable, but if you need a second shot if you muck up the first, then not the most practical or quickest feature and a right bugger with gloves on!

The irons sights are fully adjustable, with elevation on the front blade and windage on the rear U-notch. Though irons are not popular in the UK, the K95 is sweet to use, as the design and layout; sans glass, is really shootable! But it’s with optics where the rifle really shines and you have no choice but to pick Blaser’s saddle system, as the top of the barrel shows two bridges cut for their leveractuated QD mount. I fitted up the Baronesse with a Schmidt & Bender 3-12x42 Klassik with illuminated A9, cross-in-ring reticle in the first focal plane.

This is a useful pattern, as it allows close-up, as well as longer range use, given the magnification you dial. At 12x magnification, the stadia does get a bit thick but offers plenty of precision and is great in low light too. I used two lots of ammo; some PPU 139-grain FMJ, which duplicates the old M96 Swedish Mauser’s service load and Lapua’s 155-grain Mega round nosed soft tip expanding. I ran it in with the PPU after cleaning it and the K95 was shooting sub-1-inch; not bad. The Lapua dropped that down to an average of ½- ¾-inch, so more than a little impressed with both offerings.

Being a 19.5-inch barrel, I was a bit concerned that loads might not make the minimum, large deer legal energy level of 1700ft/lbs, but I needn’t have worried. The PPU was averaging 2417fps/1800ft/lbs, though being an FMJ is not a hunting load, the extreme velocity spread (ES) was 70fps! The Mega impressed at 2445fps and a useful 2070ft/lbs with an ES of just 8fps. Though slow, compared to numbers like 243 or 308 Win, the old Swede is a real performer and gets the job done on even larger game like reds. In Sweden, this calibre is entry level for moose and it does that with ease too!

In use, the light weight of this K95 made the rifle a tad jumpy but nothing serious. As I said, the reload is slow and not easy with gloves on, which is not helped by the rimless case design of the Swede! I’d opt for a rimmed (R) calibre; probably 6.5x57R or 7x57R, as there’s just a bit more to get hold of on the way out. I would have much preferred for Blaser to have gone down the automatic ejection route with the mechanism. Yes, I know it’s more complicated but it would give the K95 the edge in this area!

As I said before, why would you pick a single shot rifle for hunting, as a second shot is a long way away when compared to a magazine-fed bolt-action? Regardless of calibre and barrel length, the K95 is small and light, so ideal for mountain hunting and similar needs. It’s also a little beauty for woodland stalking, with something like a 1.5-6x42 compact scope on top, or even iron sights if you have the skill and confidence. But what it does do is ‘focus the mind’ on the job in hand, as you need to get it right first time, every time and I did find I very much got in sync with the Blaser, helped no doubt by its very shootable feel and layout.

A German colleague of mine described it as an old man’s gun; the sort of thing you buy and sit up high seats with on nice days. I can see that, but in truth the K95 is no less a serious rifle than Blaser’s flagship R8 straight-pull and it takes a confident hunter to use it! Before I send the Baronesse back I intend to shoot a Roe buck; what else?