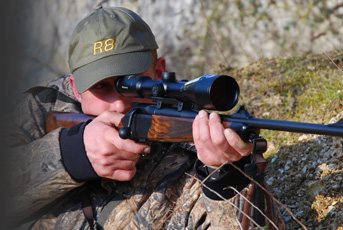 First I’d like to say thanks to Rupert Haynes (Openseason Ltd) for getting me a Blaser R8 so quickly. I think we will be the first in the UK to test one. Chronologically we are out of sequence as the R8 is Blaser’s latest version of their massively successful straight-pull R93. Which has been the top selling bolt-action in Europe for 15 years; no mean feet considering the competition…

The last time I used any form of R93 was about six years ago when Beechwood Equipment had the agency. I tested the Long Range Sporter (LRS) and a synthetic-stoked Professional. But the R8 is here and current. Plus I have jacked up the long term loan of an R93 in 6.5 Swedish and 223 Rem and will test it as I did the Mauser M03, with a few months of constant use for everything.

If you’re a bit fuzzy on the R93 I’ll explain. It’s a straight-pull system, which means you pull the bolt handle rearwards to open/unlock the gun and push it back to close/lock. It’s faster than a comparable turn-bolt as less movement is required.

The design is unique as it uses a 360º, radially locking bolt with plunger-type ejector. This is achieved by multiple, L-shaped collets that sit behind the bolt head. As the bolt slides home and chambers they are forced out in front of a lip in the chamber extension to mechanically lock the action.

The R93 differs in other ways, some good, other perhaps not immediately obvious to accepted thinking. As such there is no receiver, as the action is based around an alloy spine that mounts the barrel and provides a place for the bolt and carrier to run. Locking is direct into the barrel; a consequence of this being the scope is mounted there too using a QD saddle mount, as there’s no where else for it to go! Something I think that contributes to the accuracy potential!

Different is the lack of a traditional safety catch, instead there’s a de-cocker. This sits at the rear of the bolt shroud and manually cocks/uncocks the mechanism. Feed is from a top loading, blind box magazine that uses drop-in inserts. The R93 is short but with no loss of barrel length, as the trigger sits under the magazine area, so saving around 3 ½” overall. The only model that has a traditional detachable magazine (DM) is the LRS, here the trigger by necessity is positioned rearwards in the normal manner.

Another anomaly is that apart from the trigger blade and vertical plunger all the mechanism is contained in the bolt assembly.

The R93 main feature is it’s a switch barrel, so you can change calibre by swapping tubes, magazines and bolt heads. Also getting a left hand gun is not the hassle it is with a fixed receiver design; all you need is a left hand bolt and you’re done. Plus it packs away nice and compact in a carry case, so is ideal for travelling.

Briefly that’s it and the R93 is one of those guns you either love or hate. It’s certainly not to everyone’s tastes and I reckon there are a few areas that need sorting. I have not yet made up my mind, but I’m warming to the R8 as I’ve been using it for over a month now…

I always thought the R93’s feed system though reliable, was not that easy to load/unload. This it seems was also the major moan of owners and potential buyers, so finally Blaser decided to do something about it. Given the choice of model options plus their unusual rimfire conversion kit the gun has changed little since its inception. So a make-over was well overdue; the result is the R8, which though looking near identical is an improvement in some ways. But I reckon this new build won’t be to everyone’s liking…

Most controversial is the new DM system. Blaser, obviously not wanting to increase overall length - which is a good selling point - combined the trigger guard/blade housing (TMH) with the base of the magazine box. Looking no different to the R93 layout, the result; when you dump the mag; the TMH comes with it!

Madness? As you could potentially lose or damage two essential parts of your rifle, which is a valid point and one other shooters I poled seemed to pick up on. However, and after some use, it occurred to me that it would be just as easy to lose a normal DM with similar results, though replacement is more expensive. So though different I feel it’s the usual resistance to change and if you want belt and braces then stick with an R93… However, you can get the R8 with a blind box system if you prefer, but why would you?

So what would the trigger be like as the R8 now offers what I would term a remote system? You pull the lever, which pushes up a connecting rod to trip the mech. Much to my pleasure it breaks at a crisp and readable 2 lbs every time! Also different is the fact that it resets without the aid of a spring via a desmodromic linkage that uses a rocker arm and cam lobe instead. A concept I believe that was first used on the valves of Desmo Ducati motorcycles…

The bolt and barrel though looking no different have also been re-designed, though the locking system remains identical. The upshot of this is no major parts are interchangeable with the R93, except the scope mount. So if you were thinking of buying an R8 and swapping your old barrels etc over – forget it! Blaser says the R8 is better and stronger, which I don’t doubt. However, if as an existing R93 owner you want to trade up to it; you’re going to have to sell your old system and start again with the new one!

More obvious changes include the straight combed butt, which along with the palm swell and larger thumb channel really do offer a far better hold and head position. Also recoil seems to be a bit smoother too. The Schnable forend feels a bit fuller but I’m not sure… Blaser have also re-shaped the de-cocker and with the R8 Black include the Zeiss IC (illumination control) interface as standard. This with an IC scope fitted means as you cock the action the red dot in the reticule automatically comes on.

So how does the R8 do in real time? The magazine now holds 4-5 rounds (standard calibres) in a larger version of the original R93 rotary insert. This upping of capacity is to be welcomed certainly in the wider bodied calibres like the WSMs as it now allows three in the mag.

Release is by twin, integral catches and when removed the gun will automatically de-cock. Blaser offer a cover for the magazine aperture and another for the mag too. If for any reason you don’t want the DM facility there’s a lug inside that is pushed back to lock it in place. As with the R93; filling is still a little stiff but you now have the option of doing it on or off gun. Plus an en-bloc load/unload too.

The actual feed inserts clips into the magazine box, so when you change calibre you don’t need a whole new trigger/mag unit. These however are available should you feel the need for a spare. The action stroke is a simple pull/push movement and very smooth too, with no extra effort required for cocking, chambering or ejecting. Blaser seem to have got primary extraction down to a fine art, which is a big issue with straight-pull actions.

The R8 test gun came fitted with a Zeiss 3-12x56 Varipoint M scope in a rail mount. The QD base attaches to the barrel re-enforce by a saddle with lugs that engage with blind holes on one side and rotary catches that turn into pockets on the other. Clever is the fact you can adjust the tension of the clamps with a screwdriver for a secure fit. Ammunition went to 139 and 156-grain PPU JSP and Lapua 155-grain Mega (SP).

Magazine aside the new, straight-combed butt and pistol grip layout makes for a more comfortable/natural head position and hold. Accuracy testing was interesting; loading up with the 139-grain PPU showed the R8 could seriously shoot. The best 2-round group showed two holes just touching (1/2”), which was amazing… Moving up to the Mega saw the groups expand to 3/4” and an inch with the PPU 156s. The reason is the rifling twist, which with 6.5x55mm seems to suit around the 140-grain mark. The two heavier loads also show how critical even a minute change in weight can be!

Next the acid test; would the groups maintain after barrel and scope removal/re-fitting? Unsurprisingly they did, which is an essential if you are offering a switch barrel system.

If you’ve never expierenced a straight-pull action; the R8’s is smooth and easy with a consistent stroke. This combined with the improved recoil characteristics makes a quick, back-up shot a doddle.

The de-cocker is different as it’s not a safety in the accepted sense! When it’s down the mech is not cocked and the action locked, though a slight upwards pressure on the catch and pulling the bolt handle will open it, though it will not be cocked. So you can chamber a round ready to go but the gun is totally safe.

To fire push the de-cocker all the way to the top of the slide (red square exposed) where it will stay. Now every time you fire and work the bolt the action will automatically re-cock. To make safe – push the catch in and up at the same time and it will reverse and de-cock. To those with rifles with normal ON/OFF safety catches this system is different and needs to be expierenced to be understood. Again some people can get on with it others can’t… Initially I found it stiff in operation but you get the knack, but by comparison I’d say it’s a tad slower.

Currently the R8 offers the following models – Standard, Luxus, Black, Attaché, Safari (three versions) and Baroness with the synthetic-stocked Professional coming soon. The only differences are barrel-type, finish, decoration and wood quality, which is reflected in the prices. The Black (plain barrel iron sights, grade-6 wood) is £4,700, a fluted tube puts that up to £5,300. However, the Standard (grade-2 wood, grey action) is £3,000, with the Professional around £2600. Compared to the R93 prices are £200/300 more. These figures do not include the scope mount, which costs £390.

A Baroness would set you back £9,200 if you like that sort of thing and I don’t. For me gorgeous wood and super finishes are wasted so a Professional would be my choice. To be honest European prices have gone up and the Stirling/Euro rate does no one any favours…

Prices aside the R8 is quite some rifle and the addition of the DM and improved stock does lift it over the R93. Though I own a Mauser M03 with three barrels, I could find a place in my arsenal for an R8; no question! I will be getting more technical as to calibre change, ammunition, field usage etc., as I progress through my long term test of the R93, which will be starting soon.

We Reckon:
• A long over due improvement on the R93
• Fast and slick action
• Stupidly accurate