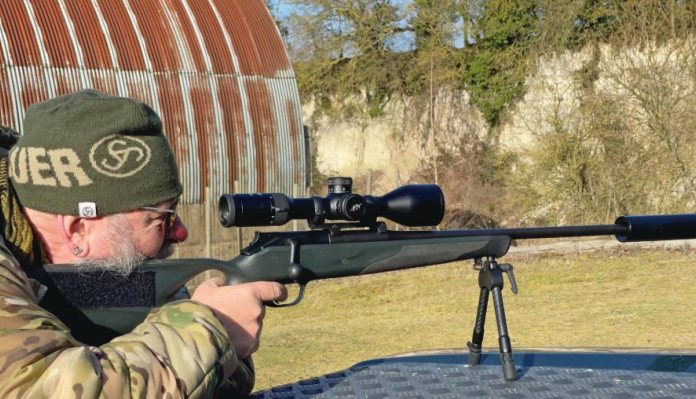 To be honest, rimfire conversions on full-bore rifles and shotguns have been around for a very long time. The earliest were probably for single and double-barreled shotguns, with either some form of rifled liner or dummy cartridge (chamber insert) with a rimfire chamber and barrel inside, that’s inserted through the breach and fired by the gun’s trigger system.

The idea is valid as it can convert a smoothbore into a rifle or simply allow the use of cheaper rimfire ammunition, usually .22 Long Rifle. There have been and are several .22LR conversions for military and sporting rifles for training and familiarisation. So, with potential established, let’s turn our attention to Blaser’s take on the concept. Yes, the kings of the straight-pull, switch barrel rifle would see this idea as a further extension of their multi-calibre hunting ethos.

Silver-tongued devil that I am (and I am), I never had any success in persuading previous UK Blaser distributors to lend me an R93 rifle and their then, embryonic rimfire conversion system. Seen one, handled one, but never got the chance to give it a run ashore. That changed this year, so thanks to Frederic Hanner (the boss of Blaser-Group UK), who kindly loaned me the current .22LR conversion kit for their R8.

The original R93-based unit was a bit odd and approached feed in a different way. The right side of what would be the chamber extension section on a centrefire barrel was machined at 2 o’clock to accept a 5-round magazine, which stuck up and out to the right at an angle. A special adaptor was then inserted into the fixed magazine well, to handle ejection, and the 22LR-dedicated, twin extractor rimfire bolt, simply replaced the centrefires version. As we shall see, Blaser, with the current R8, has moved on from this design in some ways that make for a far more practical system.

Currently, dealers are showing .22LR and .17HMR conversions, but a recent announcement from Blaser shows a small calibre push that will add .22WMR and the centrefire, .22 and .17 Hornet to the mix. Interestingly, they do not mention anything about the .17WSM (Winchester Super Magnum), which is the fastest and most powerful rimfire calibre to date. Frankly, I think they made the right decision, as the .17 Hornet is, in my opinion, the better choice!

So, what do you get for the not inconsiderable SRP of £1610? The average price in shops seems to be around £1500. Well, a new barrel, bolt head and magazine insert, that fully integrates with any R8 rifle as any centrefire calibre change would.

Feed is more conventional, as the new conversion takes advantage of the R8’s detachable, 2-piece magazine system. The outer is standard and consists of the magazine box, trigger guard (complete with locking latches) and the first part of the trigger train (blade and plunger). The inner is a calibre-specific, ‘drop-in’ rotary drum, normally 4-rounds in standard centrefire calibres. Blaser has integrated a 5-round mini drum that drops in. This does away with the machining required on the R93 barrel and in truth makes for a more reliable design. The most noticeable aspect of the build is the long, hinged, ejector plate that sits behind the mag and the fact that the action stroke is much shorter, as you might expect due to the rimfire’s reduced COL.

What Blaser has done to use the same barrel/chamber dimensions and locking system as a centrefire, R8 tube, inside and out and get reliable feeding on what is a small cartridge is very clever. I say this as the round has the seemingly impossible task of feeding from the magazine then travelling about 2-3” forward (apparently unsupported) to reliably chamber. And we all know how fussy a .22 rimfire can be on feeding.

Looking at the chamber end of the barrel, you see what can only be described as a ‘smiley face’. The eyes at the top are in fact spring-loaded plungers and the lips (below), are what I would describe as a rubber feed ramp. If you visit Gun Mart TV on YouTube and watch the video I made, you will see what I mean.

As the round is stripped from the magazine and as it enters the chamber extension, the nose of the bullet tries to rise up but is held in position by the plungers. As the bolt moves forward, the plungers telescope into the barrel, while still providing stability to the cartridge until the bolt stops and chambers, where its 13 collets engage in the radial locking ring as normal. As I also discovered, this clever design makes single round loading a doddle, as the receiver-less build allows unlimited access to just drop a round in and close the bolt, something most normal .22 bolt-guns would struggle with.

Bolt head change is the same as before. Remove the bolt assembly, turn it over and you will see a lateral catch about halfway down. Push it to the left and hinge it up, then rotate the bolt head until its hook disengages from the lug on the interior of the bolt handle, then pull it forward and out. Insert the rimfire head and reverse the operation and you’re done. Cleverly, they use the standard firing pin.

The magazine insert also follows the same way. Pinch in on the top of the insert and slide it out, then push the new one in and pinch it so it fully enters and engages. In both cases, converting from centrefire to rimfire is identical and takes the same amount of time.

In .22LR (on test), the barrel is 20” long and of standard profile. It’s threaded 15x1mm with a protector and features Blaser’s standard QD scope mounting attachment points. Rifling twist is 1-16”, which is the standard rate for this calibre. For the test, I fitted one of Blaser’s new B2 scopes with a 30mm body tube, a 2.5-15x56. Ammo went to Winchester’s original 40-grain hollowpoint sub-sonic and their newer and heavier, 42-grain MAX version, along with some Fiocchi 40-grain subs too.

I had to use a centrefire moderator as I did not have any rimfire cans with a 15x1mm thread. I assume that Blaser will rectify this with a purpose-built moddy, but I also guess manufacturers will start producing 15x1mm units to suit too, and a lot cheaper too.

I decided to zero at the near-standard .22LR distance of 50 yards, and with a bit of eyeball hold-over, this will take you out to 75, which is very much the accepted operating range for a subsonic hollow point, which is what most people will be using for bunny bashing etc. with this rifle. The day was very windy with heavy gusts, and of the three loads the best was the 40-grain Winchester, although it’s plain to see the group was strung out laterally, but on a calmer day, I reckon that would have gone sub-0.5 MOA. The heavier 42-grain MAX load shot a more conventional group of around 0.75 MOA, with the Fiocchi coming in last at around the inch. So, no real complaints and more than capable, but the blue box Winchester gets the nod, which did surprise me, as in my .22 rifles the MAX has always been the better bet.

Drop at 100 yards was around 6-8”, which was easy to dial in with the B2 2.5-15x56, given I’d fitted it with Blaser’s optional QDC (Quick Distance Control) elevation turret. I took the rifle out that afternoon and bagged a few rabbits from 50 out to 100 yards without any problems.

In terms of reliability, there were no issues with the .22LR conversion. The mag proved easy to load and the aforementioned ability to easily single round load was to be appreciated. But having to take it out every 5-rounds is a bit of a pain. Equally, accuracy was there, and the short operating stroke is sweet, plus as a conversion and compared to the original R93 design, Blaser has made a good fist of it.

It has to be said, the price is going to make some R8 owners wince, as £1500+ is a lot of money? To put it in perspective, that would buy you one hell of a bunny-busting package, with scope, bipod, moderator and change. Plus, the capacity of five, with no 10-round option is 50% less than the current competition. Most hunters are going to want a spare mag, which really means a new mag box as well as the insert.

There’s little doubt it’s a practical conversion, does what it says on the tin and will have an appeal to some R8 owners. I’ve been told that Blaser has shifted over 70 units in the UK already, which shows its viability, which I think will rise when the other small calibres come online. If I was going to splash the cash on one for my R8, I would not bother with the .22LR, but go straight for the .17HMR unit instead!