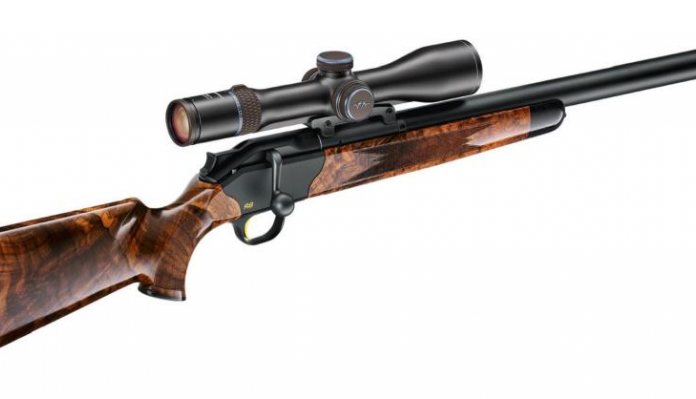 When you’ve built, what is undoubtedly the most popular straight-pull sporting rifle, where do you go? I’ve tested Blaser’s R8 in all its practical variations, and have to say that I’m a little biased, as I own the thumbhole-stocked Professional Success model and love it! The problem is repeating the obvious tends to get boring for everyone, but I now have something a little different that should pique your interest in the form of the Silence model.

I’d seen the Silence at IWA last year and thought it initially as a bit of an intriguing crowd pleaser. After all you could just buy a threaded R8 barrel and wind on the can of your choice for the same result, or could you? The major difference as we shall see is the full-length, reflex-type moderator, which addresses a number of issues on standard rifles with screw-on suppressors. Now going hands-on with the Silence has changed my views a little, although with any system like this there’s no such thing as a free lunch!

The concept is not to be a totally quiet, sub-sonic stealth rifle, as you might imagine, but a fully integrated and practical design that offers adequate hearing protection for the hunter and maybe their dog without recourse to ear defenders. And all presented in a reasonably normal package in terms of length and handling. That aside, mad professor Bruce Potts will be borrowing it after me, so that he can indulge his passion for sub-sonic 308 Win ammo, so watch out for his article.

My tester was the standard model with two-piece furniture, a thumbhole-stocked (Success) version (also in wood) completes the choice, which has a slightly sleeker looking forend with leather gripping panels. Timber quality is excellent, the receiver is blacked with the R8 logo picked out in gold, so it’s a looker!

Visually and mechanically, the Silence is a standard R8 build, with its straight-pull, 13-collet, radial locking system, detachable magazine and de-cocker mounted on the rear of the angled bolt carrier. The action and receiver is matt black with the barrel and moddy matt blued. The Grade 4 timber is of good quality, with the straight-combed butt showing a Bavarian cheek piece with double rabbet (flutes), full grip with R/H palm swell and slim rubber recoil pad. The forend with ebony cap is receiver-width and deep to accommodate the extra girth of the moderator. QD swivels are fitted front and rear.

The reflex moderator is a long and slim 53cms x 31mm, the actual baffle stack is 21.5cm and the expansion chamber 31.5 cm. It threads to the M15x1 muzzle and is supported at the rear by a short step that drops down vertically from the end of the reinforce to the short barrel. This slim, parallel tube is 17.5mm wide and measures 42cm from the chamber face and 40cm from the gas escape holes. Doing the old marked cleaning rod check, the twist rate came out at 1-10.75”. Clearance between the moddy and the barrel channel is minimal with just a hint of free-float.

Visually, the Silence gives the impression of a heavy bull barrel, which is not so; yes, it’s a bit weightier than a standard R8 at 8.3 lbs (bare-backed) but at 42”, still quite compact, which is aided by the fact that any R8 is around 2” shorter than a comparable turn-bolt type, due to its action build. Weight is well distributed, with very little muzzle-heavy feel that you might find on a conventional design with a moddy hanging off the end. Despite its specialist nature, the Silence is a rifle that you can easily ‘walk & stalk’ with.

Before we go any further, I need to explain for those of you not familiar with the generic Blaser R8 its individual features. The straight-pull action is a simple, push/ pull movement, which is fast and smooth; grasp the drop-down handle and pull straight back to extract and eject, then push forward to feed, chamber and lock. As such, there’s no safety catch in the accepted sense; instead, a sliding de-cocker sits at the rear of the action. When it’s down, you cannot operate the bolt, it needs to be pushed up with the thumb all the way to the top, where it locks, to allow you to cycle it. In this position, you fire and reload, and it will re-cock and fire each time.

To de-cock, push in/up and on the catch and it will slide down. It’s also possible to open the bolt, just by pushing the catch up 1/8”. The beauty here is that the mechanism can be instantly de-cocked and made safe even if you have a round in the chamber; meaning that going up/down high seats and negotiating obstacles etc. is safer.

The R8 has a unique, detachable magazine system; a first for Blaser, as their original R93 did not. The new design incorporates, not only the lower section of the linkage, but the trigger guard too, in what would be best described as a trigger mechanism housing (TMH). It’s retained in the well by twin, ambidextrous release catches in the base plate. Standard capacity is 4-rounds (magnums three) a removable rotary box insert that clips into the TMH; meaning that you just buy inserts as to calibre. On that point, the design offers the ability to swap the barrel and bolt head to facilitate quick and easy calibre change.

The barrel is retained by twin vertical studs that pass through the forend and as such there’s no receiver, just a bolt carrier that runs on rails in the lower action, with the head locking directly into the barrel for strength. Meaning there’s no place to put a scope, so Blaser mounts it on the barrel reinforce in a QD mount. Regardless of model, the R8 offers a sophisticated and well-engineered rifle made to the highest standards and I’ve yet to find one that does not shoot well or have a decent trigger as standard.

The Silence came with a Blaser, Infinity 4-20x58 scope (nice), with illumination control (IC). So, we have a very nice fully-moderated rifle, sounds too good to be true, what’s the down side? Unsurprisingly, it’s not cheap, but given the grade of timber, the black action and obviously the moderator, it was significantly less than I thought! The thumbhole Success version is more, but that’s mainly down to the stock configuration; typically, that’s the one I’d want!

Two things occurred; the ability of the moderator and the ballistic output. My tester was a 308 Win, which, as a calibre, is very forgiving on shorter barrels, we shall see. I picked four loads using heavier weights, which would probably suit the rifling twist: Hornady 178-grain VLD-X, Winchester 168-grain BST, Geco 170-grain soft tip and RWS 165-grain DoppelKern (double core). Noise reduction was tested by replacing the full length can with a standard, muzzle-mounted type. Despite the fact the short tube is releasing gases and blast a lot earlier than say a 22” type, the signature with the Silence was very flat and covert, with more a whoosh than the crack of the standard can. Un-moderated, it was plain wicked, and one shot told it all!

So, it’s quiet, but what about performance? Firstly, it’s comfortable to shoot, with mild recoil and good manners. As we can see from BALLISTICS TABLE 1, the relationship between barrel length, velocity, energy and bullet weight is ever critical. Most noticeable is the drop in speed, which, and depending on make/type, can range from around 150 to 250 fps and the higher extreme velocity spread, thoughts here to bullet expansion and effective/ethical ranges too. Secondly, to illustrate the barrel length differences I shot the RWS DK 165-grain load through a 22” Merkel Helix see (STANDARD BARREL).

You may disagree, but the data has a sort of 6.5x55mm Swedish feel about it in terms of energy and velocity. This being the 42cm version of the Silence, I’d opt for the 47cm tube, as you get near 3” extra, which is going to make a big difference! However, I rather like this model, as it offers a sensibly sized and weighty, fully moderated rifle, which, with the right loads, has bags of accuracy and hunting potential. I note that other big manufactures are starting to go down this route too, so I guess this is the next big thing?