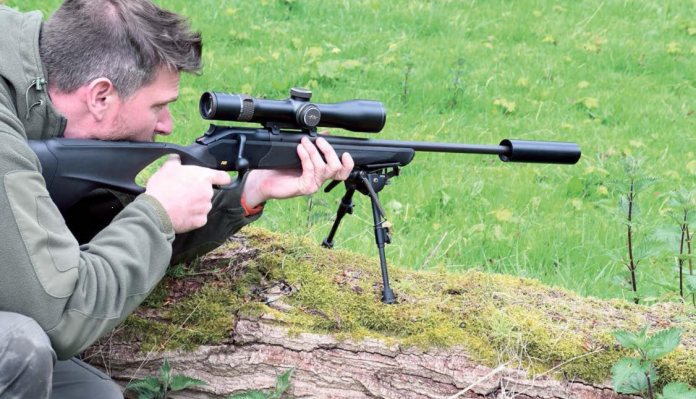 I suspect a lot of readers with be familiar with the Blaser R8 concept, a truly modular rifle system capable of handling any calibre needed for all your hunting requirements, so it’s been a further evolutionary step to add the 22 Rimfire cartridge to the portfolio. The big difference on this 22 is the chamber of the barrel which features two long pins that telescope into the barrel as the bolt is closed. These are sprung and after the control feed bolt face strips and clasps the rim of each 22 rimfire case under its twin extractor claws, the plungers pin it to the bolt face for its 61mm journey into the barrel. There is a narrow slide supporting it and although this sounds more complex than it is, it clearly demonstrates Blaser’s fascinating innovation and attention to detail, overcoming the technical hurdle of getting a tiny rimfire case to transit from magazine to chamber in what is a centrefire proportioned rifle without the literal ‘pitfalls’ of dropping on its way over the abutments.

The 22 setup is available as a kit for existing Blaser owners, like any alternate chambered barrel, but the 22 shows major alterations to the bolt head and magazine conversion kit along with heavily customised breech. Although any Blaser can be offered in true left-hand version with stock and bolt handle to suit, the rimfire kit will only ever be a right side ejector, but ejection of brass is 45-degrees forward from the line of fire, so don’t worry, it’s not going anywhere near your face!

The 22.8-inch/580mm barrel of 17mm muzzle diameter shows a 15x1 thread for sound moderator and the stock’s truly floating forend is stiff with no intermittent contact. It features sling studs on the tip and underside for bipod use, as well as a single stud under the butt. The barrel is secured to the stock/ chassis’ bedding block with twin retained Allen headed fasteners, and the whole gun can be stripped/barrel swaps done in less than two minutes, even if swapping mag/bolt faces as well. Blaser R8s have radial locking collets on their bolts allowing a cleaner abutment region, but still wonderful intricate design that performed as well as any other bolt action rimfire I have used.

A point to note is that because the brass case is eventually presented to the chamber in a straight line, you get far less bullet deformation and any lead/ waxy residue produced is flicked off the round before it meets the chamber, so keeping the bolt face less messy.

The 6-round 22 rimfire insert (+1 in the barrel if needed) clips into the regular Blaser magazine carrier/trigger/guard. It is held by two lateral clips in the same way the overall unit fits within the gun’s underside. A slider in the base of the follower locks the unit in place for security, which needs the 22-insert removing to operate it. It is great to see Blaser have had to add complexity to the rifle yet lost none of the features and security. With the mag/trigger removed the gun is totally inoperable and, likewise, it needs to be withdrawn to remove the bolt. The bolt has a full 122mm travel, but with the 22-insert fitted it’s reduced to a 62mm stroke by the bolt stop integral to the mag. This features a mechanical ejector pin, part of the calibre-specific insert whereas bolt faces for centrefire have sprung ejector plungers (left or right sided). The rear de-cocker releases tension from the firing pin with just a forward push needed to re-initiate the rifle. This locks the bolt closed if rearward, with just a half press needed to open the rifle’s chamber safely. Fast straight pull operation is the name of the game for Blaser, but until you have seen some of the competitors in detail, you will not notice the elements that make the Blaser better.

One such factor is the pin that protrudes from the bolt carrier, offering strong primary extraction as it levers against the steel face of the barrel. Not such a big deal on a rimfire but a reflection of the thought processes which make the gun reliable with high pressure, long cases in its more usual centrefire form, easily operable quietly at slow speed without the need for aggression but equally capably of rapid action cycling when situation requires.

Top of the triggers

The ‘Ultimate’ stock incorporates an adjustable, slender comb (the adjustable or recoil absorbing buttpads can be added as a cost option) with a two-position button press to allow it to lift under spring tension and a deeper press initiates memory function to save it. It needs lowering to remove the bolt but even in its flush position parallel to bore line, cheek-weld is good with just a 2.5mm gap separating the bolt’s underside.

The polymer surface of the stock has a stippled finish with rubberised copolymer moulded inserts on the hand-filling forend and thumbhole grip. This is asymmetrically righthanded (left is an option) but the ergonomics of the grip and balance of the rifle make it incredibly secure to hold with minimal muscle strain or tension needed from the wrist or hand. Reach to trigger is perfect and Blaser are a mechanical masterpiece in this regard. I always doubted a disconnecting trigger that separated from the rifle could perform without compromise, but on the contrary, this single stage unit breaking at 650-grams is, like every other Blaser, utterly superb, with 99.9% crisp glass break and 2mm overtravel on its tip.

The ATZL trigger is an option giving 250/650g breaks in varmint/target and hunting modes, but with a trigger so good, I’m very happy to stay standard. I have to be careful with superlatives, but Blaser triggers are one factor that leaves other factory rifles a little lagging, quite a few customs too!

The underside of the butt suits a supporting bag or fist to control elevation. It’s not a defined hook, but the organic shape and curves prevent snagging on a sporting build. There isn’t any hollow resonant noise from the stock if bumped and a firm recoil pad completes a 370mm/14.5-inch length of pull, showing tactile surfacing with rounded edges to speed up gun mount and stay locked in the shoulder.

Shooting the rifle was pleasurable as the stock allows good positional control, just like it has as a centrefire with stiff forend and length of pull enabling consistent bipod loading. The lack of recoil illustrates just how little physical movement is needed shooting in stable positions where the head can stay stationary on the stock as the action is cycled.

From a distance you can’t tell the gun is ‘only a rimfire’as its 40.5-inch overall length is ‘normal’, rather than lots of rimfires which are a little cramped in comparison, with compromised dimensions.

Bare rifle weight of 3.63kg/8lbs maintains the regular centrefire handling feel, and although you need to be cautious of unburnt powder residue from any rimfire, there is nothing to stop you using an appropriate moderator across other calibres.

Scope mounting uses Blaser’s proprietary twin claw quick release mount system, which is a significant price, but given the calibre’s minimal ammunition cost, I took the opportunity to test the return to zero quite deeply, with optic removed and refitted between each round of five shots, 50-metre groups. Simple, it works, fast, secure, reliable, maintains zero, and if you want proof watch the video on my channel.

I tried a mixture of 40- 42gr subsonic loads through the initial 50-metre test period with everything shooting sub-1-inch, perhaps a little slow overall average velocity on the 975-1000fps threshold, but truly subsonic and quiet from the long barrel and relatively large can, which suits me perfectly.

Best performance went to RWS HP subsonic which shot the tightest, most consistent groups averaging sub-12.5mm/½-inch five shot groups for 15 shots in the string, with the scope removed and refitted 15 times! This is a factor which truly demonstrates Blaser’s return to zero capability and, although seemingly expensive, you certainly get a premium product with true capability, as advertised, for multi calibre use.

Further use at 100-metres sadly restricted on ammo choice due to lockdown availability, showed groups on paper and steel of sub-50mm with the RWS hollow points, with most dispersion laterally in the breeze. I would have loved to run some match ammo through the gun but perhaps that is one to look forward to when availability improves, yet with minimal extreme spread on velocity, it was notable that vertical group dimensions remained consistent in what is not an ideal longer range ammo choice for target use.

Another superb example of evolutionary firearms design and engineering from Blaser has made the R8 concept even more versatile. The design ingenuity and attention to detail, especially noticeable on this 22 package, is a perfect demonstration of why Blaser are leading the way into the 21st Century.