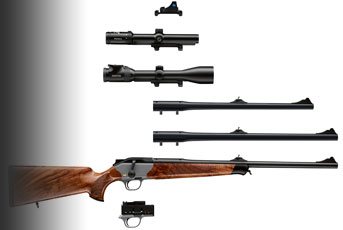 Now I have all the components I can start sorting out my Blaser R93 combo. It consists of a 2-piece, wood-stocked, black-actioned chassis, hog’s back butt with Tyrolean cheekpiece, slim rubber recoil pad and a semi-Schnable forend. Fixed, sling swivels are fitted with the forward one in the tip of the forearm as opposed to underneath.

The forend attaches to the inner chassis member by an in-line, Allan bolt. Due to the wider .222 match tube, Open Season Ltd supplied a spare forearm opened up to accept its .870” OD. The new one has enough meat on it to fit a QD sling stud, which will be useful…

At first glance the R93 does not look like a straight-pull, as the bolt handle hangs down like a turn-bolt - a fact that confused me the first time I saw one at an early IWA show. I tried to open the bolt by lifting it without success. As I was scratching my head a member of staff came over, gave me a pitying look and yanked the handle backwards; all was revealed…

Locking is different as the engagement is 360° by a series of L-shaped collets that, as the bolt head chambers the round are pushed up into a ring in the rear of the chamber extension. The movement is an easy push/pull action, and no matter what the calibre I have never experienced any problems with feed or primary extraction. The ejector is a sprung plunger in the bolt face, so fast or slow that case is coming out.

Calibre-wise I ended up with a standard/sporting weight 25-06 Rem tube and the 222 Rem Match fluted. The former came with iron sights and both were threaded and fitted with protectors; the 222 in 18x1mm and the 25 - 15x1mm. You can of course opt for a bare-backed tube.

The R93 uses a top-loading/unloading, blind magazine box that accepts interchangeable, plastic, rotary feed inserts. This capitalises on the short overall action allowed by the straight-pull design that places the trigger under the mag. In general the R93 is around three inches shorter than a comparable turn-bolt system.

Unlike a traditional design the R93 as such has no receiver. Instead there’s an inner aluminium chassis that forms the magazine box with the butt attaching at the rear and a rail at the front that locates the barrel system and forend. The bolt assembly has rails, which run in slots on the top sides of the chassis, when the gun is closed these extend along either side of the barrel and are covered by the forend.

The barrel is retained by twin, vertical studs located at 6 o’clock under the chamber with the added security of a lug and slot where they meet. Captive nuts are set in the rear section of the rail that draws the barrel assembly down, these are accessed by holes in the underside of the forend. Blaser includes an Allan key for the job. This provides its own torque setting as when down and tight the handle will flex a little indicating that there’s enough pressure applied.

The lack of any receiver means that the scope has to be mounted directly to the barrel using an adjustable, QD saddle mount. This is available in 1” and 30mm rings or the various European rails used by the top scope manufacturers.

The mount engages by two short lugs on the right that locate into blind holes on the side of the re-enforce. When in position twin catches on the left are swung back to lock into cut-outs. These hinge open to give leverage and when secure the upper sections fold down. On the right is a multi-slot screw head, which allows you to tighten/loosen the locking catches, as sometime they need to be fine tuned. Ideally they should be firm, but move with thumb pressure alone. It’s essential the pull is equal on both levers.

This direct barrel mount has always struck me as possibly the most consistent way of fitting a scope. The original idea was that you needed to use only one optic that could be switched from barrel to barrel, providing of course you knew the new calibres zero setting. This to a degree does work, so offering a reasonably cost effective option on an expensive mounting system. However, most R93 owners tend to buy more than one mount and fit glass commensurate with the barrel/calibre.

More expensive but it means you can leave the scope in situ for the calibre change. This is what I did and in the end went for a Swarovski 1.7-10x42 Z6i for the 25-06 Rem tube and a Night Force NXS 3.5-15x56 on the 222 set up. The latter is for muntjac and varmints, so the big objective, dialable turrets with Zero Stop and Mil-Dot reticule would pay dividends at night and longer ranges. OK it makes for a heavier package but this version is more a static high seat or car gun. The former would be used for roe and upwards and represents a more walk and stalk layout as it’s lighter.

Practical too is the fact that every R93 can be set up for right or left hand use by swapping over the bolt carrier and handle. Though a right hander I have always fancied the Blaser LRS (Long Range Sporter) which is a tactical/precision-type gun. I would have a left hander for the simple fact all shooting would be off a bipod and prone. This would allow me to maintain my firing hand/shooting position and operate the action with my left hand.

For your average Brit the most radical part of the design is the de-cocking system. The R93 does not have a traditional, ON/OFF safety function, instead it has a sliding catch set at the rear of the bolt shroud. In its lowest position the action is locked and un-cocked! To cock it needs to be pushed all the way to the top of its slide where it will stay, with a corresponding red dot appearing to indicate gun state. Every time you pull the trigger and cycle the action the mechanism will re-cock. Should you want to de-cock push the catch a bit further and at the same time apply downwards pressure and it will automatically slide back to its de-cocked position. Should you wish to load the rifle without cocking it then a slight push on the catch while at the same time pulling back the bolt handle will open it.

Here you end up with a round in the chamber but the trigger mech un-cocked, which offers a safe carry. Unlike a traditional safety the movement required to operate the de-cocker is a bit more, nor is it as easy as it tends to force you to break your hand position. To me this is the deciding factor if you can get on with an R93 or not! Personally I find it more awkward than the M03’s, which uses a horizontal lever. However, I have trained myself with this one over a number of years. But neither is as slick as the normal safety catch we are more familiar with.

To change calibres proceed as follows:
• Open the action and remove the barrel by undoing the twin captive screws under the forend
• Then push down on the magazine insert until it stops whilst at the same time applying rearwards pressure to the bolt
• The bolt will then move back and stop again
• Press down on the plunger at the rear right of the action and pull the bolt clear
• Lift the magazine insert out of is box
• Lay the bolt base up and you will see a horizontal catch at the base of the solid section
• With your nail flick it to the left and at the same time upwards where it will disengage
• Pull the bolt head forward from the carrier

You can now see that the bolt is in two pieces with the head at the front and the locking collar surrounding its body. Though two separate items a rivet at the rear keeps them together. Here it’s important to understand the alignment of these two components; if not you will never get the bolt back together.

Final thoughts go to calibre choice, as you can save money by selecting cartridges that use the same head size, so reducing the number of bolt heads you need to buy. Two good examples would be 22-250 Rem (small deer and fox) and 308 Win, or 243 Win and 30-06, often as not some of the magazines can handle more than one calibre in the same COL.

Owning a Mauser M03 I’ve totally bought into the switch barrel concept. It offers one familiar chassis with the option of specific calibre barrels and scope options for my hunting needs, plus a take-down rifle which is great for travelling. In this the Blaser R93 is the same, over the next few months I will see how I get on with it.

Next time; range time and finding a load.