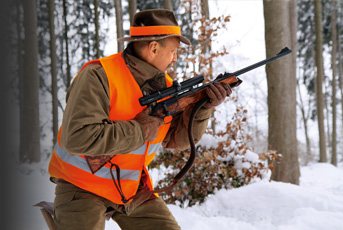 I have to say it has been enjoyable and also eye opening being able to use a Blaser R93 straight-pull rifle for a protracted period of time. Though we only require a rifle to shoot straight, the nuances of different designs are none the less interesting and give a greater appreciation of what works best.

The Blaser stands out in a number of ways as it’s a straight-pull action, which in terms of operation is technically twice as fast as a comparable turn-bolt. The movement is a simple, two-stroke, pull push, as opposed to the four-stroke - lift, pull, push and close. There is also less disturbance to the shooting position too. This offers a potentially faster second shot, which can be advantageous in certain situations, but not essential.

Some feel the R93’s multi-collet locking system is not as robust as your typically larger, twin/multi-lug designs of the turn-bolts. I have heard comments about debris getting into the collets and stopping the action closing. Given the open nature of the build I can see where they are coming from, but it has never happened to me. Though the extra leverage potentially offered by a turn bolt might allow you to open or close a stiff action if you really have to… But how often might you encounter such an extreme condition that needs you to shoot through it?

The Blaser is on average about three inches shorter than a comparable turn-bolt (given the same barrel length) due to its action design and magazine position. The inner, aluminium alloy chassis that mounts the barrel also means light weight, however this can make the rifle quite kicky with heavier calibres too.

As such there is no fixed receiver so it’s possible to convert from right to left hand operation by fitting a left handed bolt carrier. The R93 offers the ability to swap barrels and therefore calibres, as we have seen. However, this then means that the scope must be mounted on the barrel as there is nowhere else for it to go. I feel that in conjunction with the ability to swap tubes this makes it potentially more accurate than other switch barrel systems, as there’s simply less tolerances to re-align.

Truth is any switch barrel system is at the mercy of zero shift when they are taken down and re-assembled. It really depends how much deviation is present and how much you feel is too much, as over time wear is inevitable. I have been running my Mauser M03 for three years and it has been reliable, keeping the zero point inside ½” in and out of the case, which is acceptable… In truth you would be mad not to check zero after reassembly, though my six months with the R93 has also been good!

The aspect I like least about the R93 is its magazine. It’s a blind box system that only fills and empties from the top as there’s no floor plate. By comparison to a turn bolt with a double column, fixed box style Blaser uses a rotary insert that feeds from a central position, which I found hard to load and unload.  I had 222 Rem and 25-06 Rem barrel sets and of the two the 222 was by far the stiffer. Actual feed is not a problem and when full there is not difference in ability. However, the newer R8 sorts that out with its detachable box, which perhaps is an indication of a design shortcoming finally recognised and solved…

As we Brits mainly use American rifles and similar with a normal ON/OFF safety catch the Blaser’s de-cocker is different. As the name suggests it’s a sliding switch that de-cocks and re-cocks the mechanism to order. On the plus side this gives a 100% safe carry with a round in the chamber, which can be an advantage when negotiating obstacles or getting down from a high seat in a hurry to follow up quarry. On the down side this control is stiff and not as easy to operate when compared to the traditional tang or side-mounted ON/OFF safety. I found it near impossible to work it from the firing position and needed to drop the rifle from the aim/shoulder a little.

One of the nice things about the R93 switch barrel system is the option of more than one tube style. For example I had a 25-06 Rem standard weight, which is ideal for walk and stalk use. In 222 Rem I opted for the heavyweight match/fluted for greater accuracy potential. You can get the 18mm diameter Solid option in plain or the lighter fluted version, most tubes being available with or without iron sights. For the UK, the importers Openseason tend to bring in plain barrels cut 1x15mm with protector on standard weight tubes for a moderator.

Switch barrel systems aside, European guns are not inexpensive even in their basic models, with the R93 and R8 being no exception. Most of this is down to the quality of the woodwork and if you choose extra embellishments like special finishes and decoration. As a practical hunter this is of no interest to me and no matter what version I would always go for the synthetic option, which Blaser calls the Professional. It offers a tough, weather-proof and no nonsense furniture that you will not be worried about getting dinged or dirty. However, if you prefer Grade-6 wood, engraving etc. it’s there if you are prepared to pay for it. On average you can expect to pay around 100% more for an R93 Black Edition as opposed to the Professional in the same calibre and barrel format.

There are many shooters that consider this sort of rifle far too expensive with everything apparently as extra. For example the Blaser R93 and R8, Mauser M03 and Merkel KR1 all offer similar, QD scope mounting systems, which ball park are at the thick end of £400. OK we expect to pay for bases and rings but maybe not to that extent. Yes you can have only one mount and swap the scope/mount from barrel to barrel, having to check zero each time. In truth if you buy into the R93/R8 system you will doubtless end up with separate scopes and mounts to enhance its switch barrel design. Like it or lump it, that is how it is!

I feel this needs to be said too; you need to walk into a Blaser straight-pull with your eyes open, as well as your wallet. Even a basic second calibre barrel will cost in excess of a complete rifle like a Savage or Howa 1500, with the magazine inserts being around £100 each… Plus if you don’t opt for the same case head size; the new bolt head will add to the bottom line too.

I have talked to a lot of people about this and the decision is split. Some feel it’s not the stamp of a fixed barrel/scope design and decry it as overly expensive and complicated, which is understandable. Conversely if you like what you see and really want to take advantage of it, it could be the last rifle you ever buy!  The initial outlay is the killer, say you go for a Professional in 308 Win - which is an excellent choice - by the time you’ve bought the scope mount the package is going to cost the thick end of £3000.

Though attractive due to the fact the rifle comes apart for carriage, so good for travelling, not adding different calibres makes buying an R93 a waste of time! But being smart will save money too! So you have your 308, which should see you right for all deer species and even wild boar, if you want more then go for a 22-250 Rem as a varmint option. Here you will only need to buy the second barrel as bolt head and magazine will not have to change.  Picking the right scope too should allow you to swap it between tubes and if you keep note of your corrections they can be applied for either calibre.

Price aside you need to think about what the R93/R8 can offer then decide if it’s what you need. Some shooters like lots of different rifles, conversely just one action allows you to get good with it and it takes a lot less space in your gun cabinet too.

So would I buy an R93; no! I already own a Mauser M03 switch barrel, which I like a lot. Though admiring the faster action and generally lighter design of the Blaser, the M03’s standard turn-bolt system gives confidence, as does its 5-shot DM and the ease it can be top-loaded if required, so it has earned its place in my arsenal. I would not change now as I am committed and doubt selling what I have would generate enough money to replace it with a comparable R8 system. But that would be the Blaser for me; as the lure of its DM system combined with the proven fast action could be put to considerable use…