Blast from the Past: Tikka Model 65 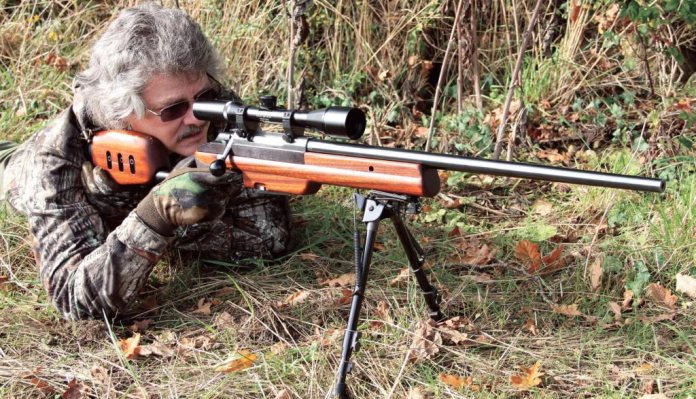 I am a seriously sad Tikka fan, having owned the same Tikka LSA 55 in 308 Win that I bought at 17, as soon as I had my shiny new FAC all those years ago. Since then, the older Tikka 55 and 65 series of rifles have been my favourite, as the quality is superb, and they make really good custom rifle projects to re-barrel for weird wildcats. I am not really into military type rifles, although I test my fair share and like the K98 sniper rifles but one sort of hybrid military rifle from Tikka really caught my eye, the M65A.

This was a really radical design from Tikka at the time with space age looks and synthetic bolt bearing but its unerring accuracy saw it being adopted by many Police and military groups around the world.

Introduced by the Tikkakoski arms manufacturer of Finland in 1988, the M65A model was a radical departure from their usual sporting and Biathlon styled rifles. Originally designed as a potential Sniper rifle for the Police and Military, it has seen uses for long range Varminting and practical rifle events and at such classic sniper shoots it is always in demand.

The M65A was only produced in 7.62 NATO cartridge, so .308 Win shoots fine and every rifle used specially selected parts for best accuracy potential and the M65A had some really interesting design features, to the bolt and action in particular. Tikka are legendary for their smooth bolt action but the M65A used the new synthetically bushed bolt at the rear, for even smoother operation. It also had a threepiece stock and adjustable rear stock on a tubular support.

It looked really radical but in fact it was incredibly comfortably to shoot, superbly accurate but very difficult to find now, as they had a short production run due to high costs.

The heart of the M65A, the barrel and action, are one reason the M65A shoots so well. The barrels are 24-inches long with a heavy varmint profile for rigidity and the rifling pitch is 1 in 12 twist rate for the NATO rounds and are selected for internal uniformity at the factory and are free from flaws and finished with a semi recessed crown and no tooling marks to the chamber area.

The barrel is also free floated along its entire length, mainly due to the unique way the M65A action beds to the stock. The action is all steel with a flat bottom for a very good bedding area and instead of directly sitting into the stock as on conventional rifles, the M65A uses a separate aluminium chassis system, which the action sits in.

This provides a large, flat surface area for the stock to attach to and so rigidly holds the action and barrel weight and thus allows the entire barrel to free float. This is one reason the M65A shoots better accuracy in any climatic conditions and even when the barrel is hot.

The action itself is also impressive. This model Tikka used the patented synthetic bush made of Polyarylamid that the rear of the bolt, which in turn sits in the action and, as the bolt is operated, it literally glides in this superb slick bush. This is also aided by Tikka’s larger than normal plastic bolt knob to give a good hold. When you buy a used one, check that the bush is all there, not cracked and has minimal ‘slop’.

The trigger is a two-stage unit but very well put together and adjustable for a very accurate first and second stage, further enhancing the accuracy potential. The first stage is short and smooth and the second stage is adjustable from 800-grams to 3kg and breaks like glass and is totally predictable, Tikka always had good triggers but this is really good. The trigger blade can be repositioned for a perfect feel by a small adjusting Allen screw.

Like all Tikkas, the magazine is quickly detachable; in this case, twin sprung buttons either side of the magazine and recessed into the stock release it smoothly. It’s a five shot, single stack mag, as used strangely on the M55 Biathlon model but not the M65 Biathlon, as you would think. You can get ten shot single stack versions, but these are ridiculously rare and worth a small fortune.

The stock is the most radical design and a real eye catcher. It’s actually made in three parts, utilising traditional walnut with aluminium inserts. The forend section is all walnut, nice grade too, which is hollowed out to reduce weight and has a bedded supporting screw section and accessory rail underneath for a bipod attachment.

The second section is the pistol grip that is walnut with stippled finish and an embedded aluminium tube that forms the support for the butt section.

This final part clamps to this tube, so you can adjust length of pull. The walnut cheekpiece is separate and can also be adjusted for height with three screws. It looks a bit odd but is superbly comfortable and adjusts to any shooter’s anatomy. It is 4.5kg in weight; so, with a scope no lightweight and is 45-inches in overall length.

I have used several Tikka M65A models over the years and all have been superbly accurate, but you do need to check a few points. Due to their modular system of manufacture, not all sections might have been the original ones and can be swapped. It’s not really a problem but the walnut sections might not match, which is a give a way. Also, due to the separate cheekpiece sections, it is quite thin, as it sits over a metal slider and so check that there are no splits, by dropping or over tightening the securing bolts. Finally, the pistol grip can also crack if the rifle has been dropped; but apart from these points, the M65A is a true classic of the late eighties.

A real blast from the past and getting incredibly rare these days, as models change hands for £1500 for a decent one but check for the faults as listed above and if it’s threaded it will affect the value. They are very accurate rifles and good fun and different to shoot and are certainly a talking point on the rifle range.