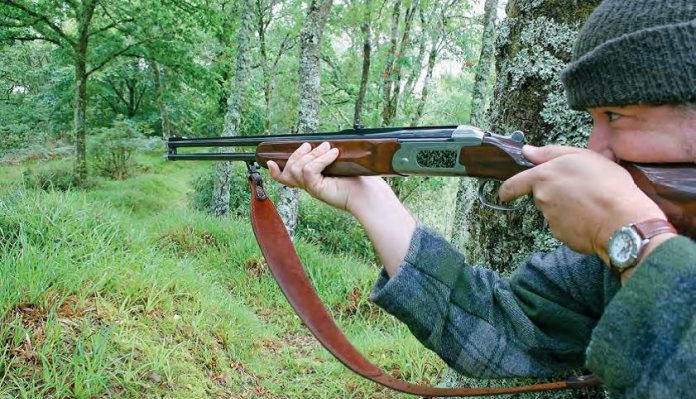 This gun is like no other, as it can morph from a double barrelled over/under shotgun to a double rifle and then to a combination rifle/ shotgun with just the change of a set of new barrels. Ever popular on the continent, this style of gun has not yet found its niche here, but the Tikka/Valmet has a lot to offer the British shooter. I remember the old advertising for these guns in Guns and Ammo magazines from the 70s, advertised as ‘all the gun you need to own’; Valmet’s claim was actually pretty close to being true.

The Valmet firm has a long history of firearms manufacturer and was established in 1926 in the town of Jyvaskla in Finland and was famous for the 412-shooting system. You have a pretty typical monobloc shotgun chassis, like a 12g over and under design but with the ability to change from 12-gauge barrels to combination barrels i.e. shotgun top and rifled barrel below, or as a double rifle configuration.

In fact, there have been more than 30 combinations of barrels sets; thus, their claims as a ‘do anything gun’ are wholly justified, as the same chassis and forend are utilised for any of the barrel choices. You therefore can have one gun with a common chassis for use as a rough, game shotgun or wildfowler and then a double rifle for stalking or driven game and a combination for rough shooting, with also the ability to conveniently take foxes or deer dependent on calibre. What’s not to like?

The Valmet was a popular model in Europe and also in America, funny enough, and it slowly evolved from the 412 to the 412S and then was bought out by Tikka rifle works with Sako in control and then became the Tikka 512 model. Finally, when production went to Italy it was part of the Finnclassic range.

The Valmet has a classic over/ under shotgun profile, using a monobloc chassis locking system to engage and lock the barrels with a forward pivot pin. This system is very strong and easily copes with the pressures exerted on it, even from the largest rifle calibre used; in this case 9.3x74R and the side walls are equally thick.

Although some models did come equipped with a double trigger system, most were supplied with a single trigger, combined with a barrel selector. This is a small button in the trigger blade itself that when pushed to left or right it will choose either the top or bottom barrel and is very fast and conveniently placed.

The trigger is also mechanical in operation and does not rely on the recoil of the first shot to set the trigger sear of the second barrel. This is highly important, especially when shooting with double rifle barrels, as it means that if the first shot fails to go off, the second barrel can be instantly fired by just pulling the trigger again. If something is charging at you, that’s very reassuring! Inertia trigger systems cannot do this.

The barrels are opened with the traditional top lever operated with the thumb and closes using a top cover very much like that from a Remington 3200 shotgun. Just behind the automatic setting sliding safety are two pop up buttons that show if either of the barrels have been fired or not; raised- not fired, lowered- fired.

The stock has had various guises from a classic form or with a Monte Carlo cheekpiece and has been offered in tough synthetic finish or traditional oil. The Monte Carlo version is by far the most popular.

The Walnut forend is common to any of the barrel combinations you wish to use and is attached with a simple under lever catch system. The barrel and action finish was originally a deep blue but on newer models can be nickel finished, stainless or combination of the two.

The barrels are 12-gauge (20-bore was offered for a short time) and can be fixed choke or more recently multi choked, with barrel lengths of 26-, 28- or 30-inch.

The combination barrel sets have a three-inch chambered 12-gauge barrel, with improved modified choke of 24-inches, with a vented rib cross-filed to reduce glare and with a folding rear sight and dovetails to mount a scope if required. This barrel sits above the rifle barrel that could be had in .222, .308, .30- 06 or 9.3x74R; there is a barrel regulation system that allows the point of impact to be changed.

This is important, especially on the double rifle configuration, where at the muzzle there is a sliding wedge that adjusts for lateral movement and half way down the barrels is a sliding and lockable wedge that dictates vertical dispersion. In this way, you can get both barrels to shoot to point of aim using a variety of ammunition. Typical calibres available as double barrel sets are .308, .30-06, 7.62x54R, 9.3x94R, although others have been made.

As a compact, 40-inches overall length typical hunting arm, the Valmet 412 shooting system is very unique and actually a highly practical gun; I used to own a .30-06 version, can I have it back please!

Sights were usually a double bead on the shotgun barrels and then a simple fore-sight with folding rear sight on the combination and double rifle barrels. These were simple units but fine for the close-range use on boar or deer in heavy cover.

All barrels had dovetails at the rear for scope mounting, which was great, as I used a one-piece Valmet mount that clamped on with one Q/D screw and was sighted for the top barrel at 100-yards. Take it off and then both barrels on the open sights were dead on at 60-yards.

These rifle/shotguns really handle well, due to the very shotgun type styling and has a good weight of 8.5lbs in the double rifle guise and 7.25lbs in 12-gauge barrels fitted.

Priced second-hand from £500 for shotgun barrels to £850 double rifles, how many guns can shoot pigeon in the morning, a wild boar at lunch, a deer in the afternoon and fox at dusk? The Valmet can and very well too!