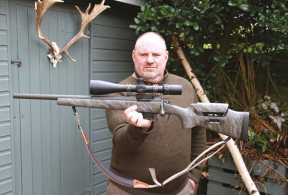 With custom rifles costing the earth these days and waiting times sometimes taking up to 2 years it is no wonder people are asking for something special they can buy off the shelf. Enter Mike Norris (Brock and Norris) who has designed a range of rifles that he intends to keep ‘on the shelf’ in select calibres built around a common chassis. The action, stock and barrel will remain the same but customers can specify alternatives on the theme like differing barrel length, scope mounts etc. The rifle is called the Ratel or Honey Badger which is Mike’s nickname that a South African PH gave him whilst hunting in Africa due to its and his enduring/no holds barred nature.

The Ratel is one of the nicest handling custom rifles I have tested with a design for hunters not dreamers. Every inch has been thought out and though the usual suspects of Mc Millan stock and stainless steel barrel it’s crafted to reflect attention to detail for functionality, handling, reliability and best of all accuracy.

This is Mike`s own rifle and so in left handed format, which was fine as I can shoot from both shoulders. What instantly gets you is the solidity yet perfect balance of the Ratel; it’s tough and uncompromising, just like its owner! The short, adjustable stock and detachable mag system is perfect to get the most out of this stalking/varmint rifle making for a highly practical woodland or hill gun.

Stock-wise Mike likes the McMillan M40AL HTC model with adjustable cheek piece/comb with moulded in colour and stippling. The marble colour is green, black and grey finished with a solid black Pachmayr decelerator recoil pad. The forend is wide enough to accommodate a heavy profiled barrel in this case only 7” of its 18” tube protrudes from the nose. The rake is very good at the pistol grip and your choice of cheekpiece height further assists in the perfect union between shooter and rifle.

The adjustable comb is wound up/down by an integral thumb wheel, the unit runs on twin aluminium bars that are individually locked by small wheels when you have the position you require. The build also incorporates a certain degree of forward and a backward rake to tilt the head. Length of pull (LOP) can be specified to choice but this had an LOP of 13.75” that allowed a fast shouldering and instinctive head positioning!

Into this sits the barrelled action. The job here is bedded once, twice and then honed to perfection. The use of aluminium pillars ensures integrity between the metal work and fibre glass stock and the bedding compound further ‘cradles’ the action in a vice-like grip, which can only promote accuracy potential. Performance can be won and lost on this one feature alone and Mike does one of the best jobs I have seen - and I’ve seen a lot!

The stainless steel action is a one off, designed in England for Mike it has a Rem 700 inlet profile but made to benchrest standards. It has a separate recoil lug, pinned for alignment and further ensures a good bed, with a repeater action design of eight inches length and a standard 20 MOA Picatinny rail fitted.

The bolt body shows eight flutes and has a non-coned face, the large tactical operating handle is a fine gear stick to do the job of running the Ratel. The bolt has a Melonite finish whilst the whole action as with the barrel has an Olive Drab Green Cerakote tough external skin. Overall it’s a superb action for speed, reliability and potential accuracy!

The trigger as one would expect is a Jewell unit, in this case an HVT model cleanly breaking at just over 1 lb with perfect predictability. The bottom metal or mag system is a Tier 1 (ex 3rd Eye Tactical) design that allows the use of Accuracy International 5 or 10-shot magazines in .308 calibre. This is a viable addition to the Ratal as it makes it a high capacity instantly changeable cartridge load rifle so short, long range and differing game can be engaged at will with a swift mag change.

All this is nothing if the barrel is not up to it. Mike is fastidious about his tubes, he`s like a man possessed, and good luck to him. He insists on the best select match grade barrels and internally he has specified certain rifling profiles that I am not at liberty to discuss. But to me it all makes sense and check out the results they speak for themselves.

The free-floated barrel is 18” long with a two inch parallel (1.25” O/D) that tapers down from 0.935” to .820” at the muzzle. This is the key to the Ratal`s great balance and performance. Short yes, but perfect on a .308 Win, which is most tolerate of shorter tubes certainly when compared to other calibres! Equally the balance is enhanced at the same time. It’s threaded 5/8” should you want to fit a moderator and comes with a beautiful invisible thread protector.

The free-float job combined with this short, rigid tube means that even with a big moddy up front no contact is made between the O/D and the barrel channel in the forend! That’s the Ratal in a nutshell really, it’s not at first obvious the attention to detail to all the functioning parts - Mike has thought of all potential problems and eliminated them. What you have is a hunter’s rifle built without compromise, its 38.75” long so even if you fit a can the end result is very handy and shootable!

The Ratel is one of those rifles that seemed capable with every type of ammo I chose to shoot through it, as it spits them all out with impunity. Rem factory Match shot sub-1” groups and the Norma 150-grain Ballistic Tips at 2672fps/2379 ft/lbs shot consistent 0.75”. The 165-grain Geco Express were also doing a consistent inch at 2561 fps/2404 ft/lbs. Hornady Superformance SST were quick at 2848 fps/2702 ft/lbs energy and came in at 0.75”. It’s safe to say that factory ammo shoots well in this rifle!

Using a Hornady COAL gauge to measure the best bullet seating depth in the throat and then backing off in 5 thou increments I worked up some reloads with differing weight bullets. The short barrel and lighter bullets and faster powders worked well. Best load were the Nosler 125-grain Ballistic Tip with 41.5 grains of Alliant RL 10X powder for 2868 fps/2284 ft/lbs and nice 0.”, 3-shot groups. Equally the Sierra ProHunter 125-grains shot same size with 41-grains of RL 10X for 2904 fps velocity.

Best groups went to the 150 grainers and slowly working up incremental loads with the Sierra Game Kings; an old favourite of mine. 45.5-grains of RL 15 shot a lovely 0.35”at 100 yards with a velocity of 2614 fps. A top load of 46-grains opened this up to an inch, with 44-grains shrinking that back to a most acceptable 0.55” so a small difference shifted the barrel harmonics for accuracy.

The Ratal is my sort of gun, it’s a hunters rifle designed by a hunter for us hunters. It is a no compromise approach to giving the discerning shooter a custom rifle as best they can from the shelf with premium parts. Personally I love the handling, and accuracy was spot on; short barrelled .308 `s work and work too at long range. At £3995 I have to say with the spec it’s a bit of a bargain when compared to factory rifles.

FOR: Superior build quality and ability
AGAINST: Not cheap
VERDICT: An exceptional all- rounder for those wanting a top quality rifle