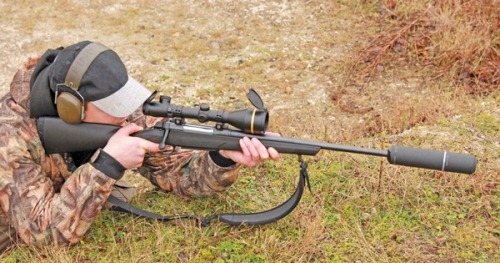 Plus points include the low bolt lift angle and tang-mounted safety, negative would have to be the drop plate magazine system that has a detachable box on the floor plate. For the life of me I could never understand why anyone would come up with that! Rifles shoot well enough and are available in a number of standard and even varmint options.

Browning’s next attempt was the X-Bolt and a far more logical design all round! It retained the tang safety and offered a conventional, drop box magazine system along with a cocked action bolt unlocking button. An Inflex recoil pad as found on Browning’s shotguns was fitted and the look was a bit more stream-lined too. I have a Hunter in 270 WSM and it’s a good shooter. I thought with the proliferation of the X-Bolt, which now covers 12 models including a thumbhole stock and a heavy varminter with the multi-adjustable GRS furniture the A-Bolt had had its day.

Well apparently not so as I have here on test the latest Browning A-Bolt (AB3), Composite (synthetic) threaded. Layout and features are a bit different from all earlier A-Bolts and it’s plain to see that this rifle is aimed very much at the budget end of the market. In the last decade this has become a highly important sector for the American rifle industry with the likes of Remington, Ruger, Savage etc all competing in this highly lucrative area. Even Sako of Finland has embraced this ethos with their own and similar A7.

To write any of these rifles off as cheap or shoddy is a gross misunderstanding of the concept. Yes stocks are synthetic, because they are inexpensive to produce, but quality and features are good as they still need to be shooters. In essence these rifles will cost around 50% less. Let’s take an X-Bolt for example which costs approximately £1000+; the AB3 is around half of that figure. Obviously you don’t get any fancy options on wood, finish or versions, but a no-nonsense hunting rifle that will put the meat on the table!

The AB3 comes in just one version - The Composite and a choice of five calibres and a number of barrel lengths. There are no iron sights and depending on the calibre/ barrel some rifles are threaded 14x1mm only for a moderator. But first!

The most obvious change from the original A-Bolt is that neither fish nor fowl magazine system has been replaced by a standard, detachable box mag, which is a huge step forward and one that will certainly give it a far more UK appeal. The familiar, facetted bolt shroud, cocked action indicator and flat, angled handle remains giving a low, 60° bolt lift conducive to smooth and easy operation. The bolt body is now a thick, solid bar with a 3-lug engagement. The tangmounted safety is retained and it’s possibly one of the best positioned systems of its type.

UNLOAD/safety catch it’s positioned rear right of the action. The bolt removal catch is on the left. The magazine holds 4+1 in and is a combined polymer/metal double column box-type. The release catch is flush fitting at the front of the well. It can also be loaded through the action too. No iron sights are fitted but the rifle comes with a set of steel, 1” Weaver-style bases, so one less thing to worry about. The tang-mounted safety is something Browning has always done well. The sliding catch pushes forward to FIRE and pulls back for SAFE; in this position the bolt is locked! The position is very natural and once you have made your firing grip it only requires you to lift up your thumb to operate it. So little to no disturbance of this all important position! The black synthetic stock shows an Inflex rubber recoil pad, which from past experience with my 270 WSM X-Bolt really

Like the X-Bolt the AB3 offers a bolt unlocking button, so you can open the action with the safety on. Looking a bit like a takes the sting out of hot calibres. QD sling studs are fitted front and rear and the layout shows a slight, R/H palm swell with a straight, medium height comb and a 14” length of pull (LOP). Texturing for extra hold is applied on the pistol grip and continues on to the full length of the forend. There are vestigial finger boards above and the forend tip angles rearwards. The trigger blade and guard are plastic and the latter is large enough for use with gloves on. In truth the AB3 takes more from the X-Bolt than it does from the original A-Bolt.

I am not sure if Browning will move the AB3 forward or keep it as a budget rifle, probably the latter as the X-Bolt offers many options. Currently rifles in the UK consist of three calibre/barrel length options all threaded: 308 Win - 20”, 243 Win - 22” and 30-06 a confusing 21”. The 308 is a flexible cartridge that is not overly affected by shorter barrel lengths. The 243 is one of those calibres that does not do that well in shorter tubes and I consider 22” to be on the limit! However and depending on bullet weight/speed you might not make the UK large deer legal energy requirement of 1700 ft/lbs with lighter projectiles. The 30-06 at 21” is shor t for a round that on average is using 20% more propellant than a 308 Win. The upshot could be reduced velocity and increased flash and maybe recoil.

I fitted a Leupold 3.5-10x50 VX-3L in Nightforce 30mm rings. For moderation I decided to go with aimSpor t as I was testing their new Triton reflex moderators so used the larger Model 50 in 7.7mm (.30” cal). No dramas on the rifle, the magazine loads easily and feed is reliable and the bolt is smooth and easy to cycle with positive extraction and ejection from the plunger-type unit used. Equally the trigger was very good, breaking at a crisp 4 lbs with no appreciable creep! Not really surprising these days as the generic bolt-action system has been refined to a very high standard regardless of make or price.

Un-moderated the AB3 was shooting an inch at 100m and with the can on it just made things a bit more consistent and a tad tighter too. Though a reasonably hefty calibre 30-06 is generally well behaved and in conjunction with the Inflex recoil pad proved easy to shoot. As I said the 21” 30-06 is in my opinion too short. Though saying that the figures I got using the Winchester 150-grain Ballistic Silver Tip though low for this calibre will still kill any deer on the planet without a problem!