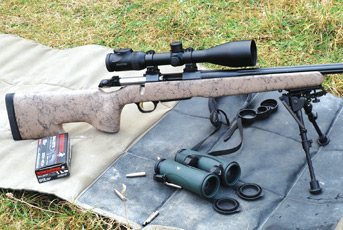 The Browning A-Bolt is one of those rifles you will either love or hate; it’s been on their books a long time and shows some unusual and I reckon useful features. In many ways their newer X-Bolt is the superior design but the old A-Bolt offers a lot more options, a good example is the rifle on test - the Tactical Varmint (TV) in 223 Remington. Coming at it from both hunting and target shooting directions, its heavy/fluted, 1-9” rifling twist barrel allows it to use a surprisingly wide range of bullet types to satisfy both the varminter and paper puncher.
NUTS & BOLTS

The dominating features of the rifle are the heavy, fluted, 22” barrel with an O/D of one inch, which is threaded 18x1mm. Next the Light Tactical, Bell & Carlson synthetic stock with Browning’s Dura- Touch finish in tan with a black web over the top. The build offers a large/square forend profile that fully floats the tube. At the rear is a high/straight comb with large pistol grip with R/H palm swell, a thick recoil pad and a grasping hook underneath. Two sling studs are fitted up front to give dual bipod positioning with one at the rear. Length of pull (LOP) is 14”. The rifle feels good with a decent head/scope position and good LOP for most needs. It’s not light as you might imagine and is more a prone or supported option. Un-scoped the TV tips the scale at just shy of 10 lbs.

As I said the A-Bolt action is a little different with some useful and one rather different feature. The handle is flat and straight and offers a smooth and short 60° lift angle and is easy to cycle without breaking your firing position. It’s shrouded at the rear and shows a cocked action indicator that protrudes from the base. Behind this is a tang- mounted safety, which is a joy to use, again offering very little disturbance when operated. It pushes for ward to FIRE and reverses for SAFE, where it locks the bolt too.

The bolt head is fully supported with a plunger-type ejector and well sized extractor, locking is by three, equidistant lugs. Browning have continued this theme by fitting a 3-splined, non-rotating body shroud that eliminates lateral movement to offer a smooth and easy stroke. Most different is the magazine system as it looks like a standard, top-loading floor plate-type, but it is in fact a semi-fixed, removable box. Pressing the button at the front of the trigger guard pops the floor plate and when it swings down you can see the mag box attached to it. This can be unclipped for filling or done in situe, which is not as weird as it sounds, though tends to be a deal breaker when it comes to buying an A-Bolt, as it is a little unconventional!

Taking the action out of the stock show a typical, Bell & Carlson heavy build with a good solid synthetic with an integral, aluminium bedding block. Up front the traditional recoil lug (sandwiched between action and barrel) is synthetically bedded; all in all most acceptable for a factory offering.

The gold-plated trigger is wide and grooved and offers a bit of adjustment, though the action has to be removed from the stock to access it. From the box the TV’s broke at a crisp yet firm 4 lbs, which I thought could be a bit lighter, however, no big thing and easy enough to learn.

The Tactical Varmint is very much in tune with UK thinking for a fox/vermin gun chambered as it is in 223 Remington, which is still probably the best general calibre for this role and also small deer. Unusually and welcomely it offers a 1-9” rifling twist, so gives the option of heavier bullets than the standard 55-grain fare, so could well appeal to those looking for a range gun too.

If you’re wanting to use heavier bullets then 1-9” is probably the best general option before it gets too specialised, as it should allow weights up to 69/70-grains. For paper punching my choice is Sierra’s 69-grain BTHP

Match King, equally the other big manufactures, Nosler, Hornady, Lapua etc all offer similar products. However, the down side is that the lighter weights aimed at the standard 1-12” twist rate might not stabilise so well, which is what I was about to find out and came away with some unusual findings.

The major surprise was how well the ultra-light NTX shot. The 75-grain TAP FPD was as expected as that is getting on for a heavy bullet better suited to 1-8 or 1-7” twist rates. The Winchester was also a bit confusing as I had some old 55-grain Ballistic Silver Tip and some new stuff. The former was around 2” but the latter shot .75”, which I thought good for 1-9 twist of the A-Bolt. Regrettably I did not have any 68/69-grain bullets as I feel that would have been what the rifle really liked. The Geco Target was also pleasing and well suited to precision use, though no good for hunting as it’s non-expanding.

Top choice for me goes to Hornady’s NTX and 60-grain TAP FPD, Geco Target and Winchester’s Ballistic Silver Tip. With the last being perhaps the best all- rounder for the hunter, producing 3106 fps/1188 ft/lbs.

In general usage the Tactical Varmint showed no vices, bolt lift and operation were smooth and easy, likewise no problems on feed or ejection, with that plunger-type ejector pinging the empties away clean. The tang-mounted safety is a dream too and ideally positioned. The magazine, well love it or hate it, but it’s not for speed reloads, but then again that is not what this rifle is all about! Oddly enough I found it quite good as you can pop the floor plate and the mag assembly swings down and can be loaded in situte, which is probably easier than dropping them in through the top. The trigger is crisp and clean but just a fraction heavy, though eminently useable once understood.

The Light Tactical stock is a solid design and I do like the grasping hook under the butt as it really allows you to lock into the rifle.

Its Dura-Touch coating gives a smooth but grippy feel, which helps your hold. So overall no serious complaints and I reckon that given its role the Browning A-Bolt Tactical Varmint should do well in the UK, especially as you can also get it in 308 Winchester too. Mounts are included and I fitted the new Swarovski 2.5-15x56 Z6i II. BT L (2nd generation) scope with ballistic turret, I also used their new 10x42 EL Range laser rangefinder binos.