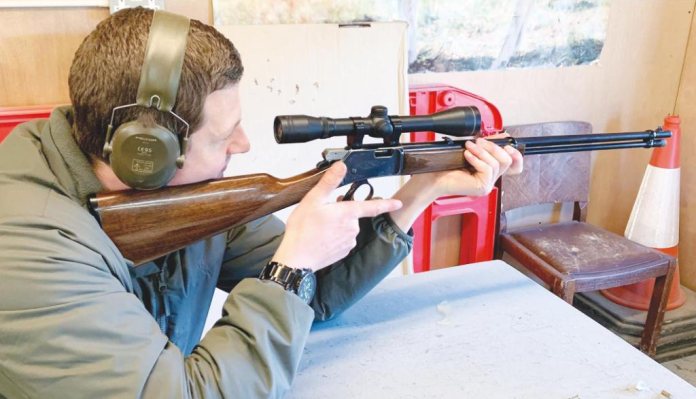 One of my passions is the seemingly humble 22 Long Rifle (LR) rimfire. The diversity of types available for this small but prolific cartridge covers just about every firearm design ever made, and I’ve even seen a belt-fed, scaled-down, semi-auto replica of the old Browning 1919 medium machine gun, complete with tripod. My collection is growing, with two semi-auto look-a-likes; a S&W M&P 15/11 (AR15), GSG StG 44 assault rifle, Ruger 77/22 and their lever-action 96/22 and a CZ452. I’m always on the look-out for more bargains too, as that’s exactly what these rifles are!

I say this, as short of pouring salt water down the barrel, the bores stay near pristine, as the lubricated, lead bullet has little to no effect on corrosion or wear. Generally speaking, the only thing to consider is condition and mechanical reliability of a potentially sweet little shooter. A good example is my CZ452 Varmint, the bluing on the barrel was worn; big deal as it shot an easy 1” at 100m with most loads, for the princely sum of £125.

The subject of this story is a Browning BL 22; well, in fact a Miroku, as a lot of their production is carried out in Japan, with no detriment to fit, finish or ability. This model is a lever-action and, as I discovered, was launched in 1996 and is still on their book’s todays in a number of versions.

Mine was a Grade 2, with quality, varnished walnut, fine-cut chequering and floral engraving on the steel action and nicely blued. The general metal finish was odd, as on the right it was in good nick, but on the left a bit spotty in places, it looked like it had been stored on its left side in a gun box in a cold loft. One anomaly was the bolt, which had been stamped with a proof mark, which had caused a slight dent, that happily didn’t affect functionality, so I was not complaining for £50, as I reckoned it was a bargain.

The BL 22 is very much a traditional lever-action, although differs by having a short, 30º lever throw, which also holds the gold-plated trigger blade within the lever/ trigger guard assembly. This took a little getting used to, however and with practice it made for a fast and slick action movement.

Lever-action rimfires tend to follow the more traditional, under-barrel tube-type magazine system. These fill from the front with a cut-out (loading port) in the underside of the tube at 6 O’clock and a removable brass tube with a captive spring and follower inside. Normally, this is secured by a rotary bayonet arrangement, which can sometimes lead to a false engagement, if you don’t engage and rotate it correctly. The BL 22’s is better thought out, there’s a sprung catch on the end of the removable section, with a cannelure pressed into the end of the fixed tube; so, once full, you just press the inner in until the catch locates, and you’re done. To remove, there’s a lug on the side you press as you pull it out.

Filling the mag is done with the port/ cut-out uppermost and the muzzle at about 40º. Rounds are dropped in base-first, where they slide down, with the final one showing in the port. The real beauty of a 22 LR gun of this type is that you can substitute shorter, compatible ammo like 22 Short or Long and even snake shot (mini, 22 LR shot shell). Although these options are not as common as they were, the Shorts are especially suited to closer range needs, where speed and energy are not such a priority. They will also increase capacity, due to their reduced cartridge overall length (COL).

Sights are reasonably traditional, with a fold-down rear U-notch with a white line-up triangle underneath, which offers limited windage and elevation adjustment and a tall, windage-adjustable blade up front. On this rifle, the owner had reversed the rear, so it folds back and not forward, possibly they did not like the triangle, who knows? Being a side-ejector, as most 22 rimfire lever-actions are, the top of receiver in this case shows an integral 11-12mm dovetail for scope mounting. I dug out an old 6 x 42 fixed optic in 1” rings, this combo very much in keeping with the look and style of the rifle.

Typically, there’s no safety catch, as the external hammer offers both full and half cock positions. With the action loaded, the hammer is fully rearwards and just a touch of the trigger fires it. However, if you want a safe carry, then hold the hammer with your thumb, press the trigger, then let it go and allow it forward under control, where it will stop a few millimetres from the firing pin on the half cock notch. To ready it, simply pull the hammer back to full cock.

In use, the BL 22 shot well with both iron sights grouping an inch-ish, at 50m and scoped up 1 – 2” at 100m. The action proved easy to cycle and the trigger broke crisply at around 4-5 lbs and was a tad firm but easy to read. This is really a well built fun plinker or a basic small game getter. It does not come threaded, as that I expect was never a consideration, although it could be cut, but would mean removing the moddy when you wanted to reload.

For me and apart from the sheer diversity of firearms types and actions offered by 22 LR rifles, is the simple pleasure of an eminently shootable design, with low recoil and cheap ammo and the BL 22 addresses all those needs well. I’ve already popped a few rabbits with it and spent a few afternoons just shooting for the fun of it and, for the money, it’s hard to beat. Anything like this also makes a good first rifle for a younger shooter or a great club gun for novices. Next up, I’m looking for a pumpaction or Browning’s neat little SA with a butt-loading magazine and bottom ejection, as that’s a real classis semi-auto!